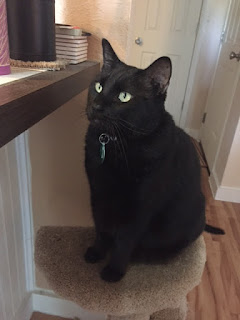 Let me back up a little. On July 4th weekend in 2011 I discovered my cat, Sampson, had cancer. I was devastated because I had to put him down. I must have been real pathetic because the husband told me I could get another cat even though he is highly allergic.

So one day we were in PetSmart and there was a cat adoption going on and there was Dexter. Casually laying in the cage looking around, all calm. The description for Dexter was this:

Dexter was the friendly cat everyone knew but belonged to nobody in particular. He just strolled into town one day and made himself at home on the neighborhood lawns. Petted by all and fed on many a porch, the neighbors decided Dexter needed a chance to have a family of his own. 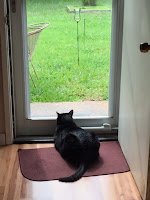 Dexter likes to lounge in sunny windows must of the day. He's happy to have some chin scratching and always ready for a snack. This is one laid back cat!

It's right on. I've managed to keep this description of him in a folder devoted solely to the cat-cat. I'm not sure why. Maybe I'm sentimental?

One of his favorite things to do is lay in the window (or door) and watch the birds. He "chirps" at them. I think this must be an outside cat thing because my previous cat (who was strictly indoors) didn't do this. Dexter likes to "talk" to them.

Another thing he likes to do is watch me while I'm cooking or doing dishes. I am fairly certain he's working it out in his feline brain how to cook. I swear he knows where all the dishes are because sometimes when I come home from work, the cabinets are open just enough for him to peer inside. I've wondered if I should put child locks on the doors but he's never climbed inside. At least not that I've seen. I think he's just inherently curious. Can you see him in this picture? This is what I see when I'm in the kitchen. He has a scratching post that is just the right height for him to get on top of and peer over the edge of the counter. He also likes to knock things off - like pencils and pens and whatever else happens to be lying up there. He knock whatever it is to the floor, look down at it in triumph as if he's really glad it's on the floor and not bothering him on the counter. It's funny. 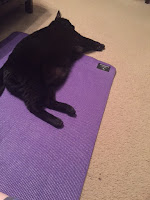 He also likes to help me do yoga. I call this his kitty corpse post. He's pretty good at it. However, doing yoga with a cat taking up half the mat is rather difficult.

All in all, though, Dexter is a really good cat. He doesn't do any of those annoying cat things that I dislike - like get on the kitchen counters or sleep on the placemats (my previous cat did that - yuck). He knows he's not allowed on our bed, so when the teenager is here, he sleeps with him. According to the boy, Dexter likes to head butt his hand in the middle of the night for pets. He loves pets. He also loves to head butt our shins for pets.

And when we have guests? He's 100% Mr. Friendly. They're always happy to see him at the vet, too, so when I board him I know he's in good hands. Of all the cats I've had, he's by far my favorite.

What about you? Do you have a favorite pet?
Posted by Michelle Miles at 4:00 AM

Several of my indoor only cats chatter at birds.. I think it is an individual cat thing, not a indoor vs outdoor cat thing :)

I love seeing the pictures you post of Sir Dexter. LOL I wish I could have a cat but I'm really allergic to them, if I'm around them for any length of time. Something about them will trigger an asthma attack, so I play it safe and pretty much only enjoy them in photos.

Glad you're so happy with Sir Dexter, and that he found his forever home with such a good mommy.

I love seeing pictures of Sir Dexter. He's such an adorable cat! Especially the yoga pose. I like cats, but unfortunately they don't like my allergies. :( So I'm like Kathy, I like to observe them from afar. Like following Dexter posts. :) He's lucky he found such a good home!

I really enjoy your posts on Dexter. Such a pretty cat! I love cats. But my allergies and asthma prevent me from having one. Cats are so smart. I think some people aren't aware of how smart they are. LOL

My fuzzy muse is my Cairn Terrier, Sparky Lionel Urban. He's been my office doggy since he was a pup. He can be vocal when coming to tell me I should go to bed, or when he wants chewy stick treat.
Like Dexter, he's very friendly and enjoys being petted.

Sparky has a wardrobe. He likes to wear t-shirts and sweaters in the winter. I bought him those little boots held on with Velcro to put on their paws when it's cold. A total failure. He hates them and I get the worst case of stink-eye when I get them out.

I have a Calico named Gracie...Well Heartluck Gracie. My grand daughter named her Heartluck, and as it turns out, she was likely born the day I had my first heart attack...and I was really lucky that day! I didn't like Heartluck for a name, so we gave her a middle name and use that! She is so mean! She is always biting me and attacking my youngest grand daughter! But she is so cute and when she wants to be, she is very cuddly. My husband calls her my "Purr collar" because most times, she can be found across my shoulders or over one of them! Ha ha!
I, too, enjoy seeing your pictures of Sir Dexter!

I just saw this...We have Zeus the wonder weinee and Ashley our timid weinee. Love them both and they keep our lives very interesting. Zeus is growing into a cuddle bunny. He likes for me to sit and hold him. Ha! Love seeing pictures of your cat.