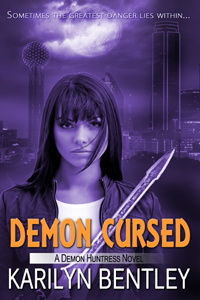 Read more »
Posted by Karilyn Bentley at 2:30 AM 9 comments:

In more than one of the many writing classes I completed, the instructor would note at some point, “the villain is the hero of his own story,” the antagonist has as strong a motivation as that of the hero. In the opponent’s mind, what’s behind his/her actions is as compelling and just and right—albeit sometimes quite twisted—as that of the hero or heroine’s. This point is usually followed with a reminder to give the villain a chance to explain his/her deeds. A number of ways exist to do this:

- The story can switch between the villain’s and hero’s point of view
- A character may share what they know of the villain’s life to describe events that shaped him/her into the antihero
- Giving the villain a chance to explain their world view to the hero—usually while holding the hero or heroine at bay with a gun, bomb, or other weapon and often as part of the climax

In the two recently released stories, I chose the third method for both.

In my recently re-released Russian thriller, Saving Hope, the villain is someone the heroine trusted, and she finds herself negotiating with him to save her daughter’s life. At one point, he explains his actions as:

“I thought I finally had all I wanted, but you ran away. When I saw you with Ahmed and those other men, I knew I had to fight for you, or lose you again. I was the one who told them about the FSB. It almost cost me my deal.”