Recently, I conversed with someone who shared his hilarious Christmas remembrance. Every December, presents were piled around his family’s tree in the living room, but no one dared to enter unless there was company or on Christmas. On Christmas Eve, the kids opened one present. Afterwards, off to bed because Santa was coming. On Christmas morning, they opened the rest. 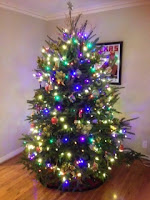 One year, he realized the packages under the tree hadn’t changed from the night before. Nothing new had been added. Nothing from Santa. And then he had this realization: his parents had lied. He’d been duped.


Off he went to confront his mother who danced around the subject and finally explained how all things Santa worked.


When I was younger, my family went to Grandmother’s for Christmas Eve celebration with my mom’s family. It was a joyous event with good food and a gift from Grandmother.


After my family returned home and we were sent to bed with the admonition “better go to sleep so Santa can come,” my sister and I decided to watch for Santa. The hallway to the bedrooms had a small jog to our room where we hid. Lo and behold, we saw Mom and Dad emerging from the bathroom which opened to the hallway. They were carrying dolls and plastic musical instruments. After a while, no more parents. So we watched longer for Santa. Finally, sleep took over and we plopped in bed.


Imagine our surprise the next morning when we went to the tree and saw the gifts Mom and Dad had carried, but nothing different. That was when we figured out they were Santa.

At what age did you discover all things Santa? 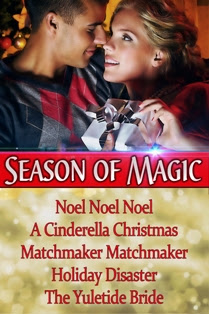 So what is new? Why Season of Magic, a holiday boxed set, is now FREE at Amazon and other e-retailers. My romantic comedy story is Holiday Disaster (Christmas + Bad Plumbing = Holiday Disaster). Here’s a bit about our stories:


Noel Noel Noel by Merry Holly ~ Dumped and lonely, is it possible to find love at the local mall? Noelle thinks not, but a chance encounter with Chase Clayborne while Christmas shopping has her rethinking her rigid set of rules.


Matchmaker Matchmaker by Bobbi Lerman ~ With Chanukah around the corner, is there enough magic left for a matchmaker to bring Molly's cynical heart back to life?


Yuletide Bride by Gerri Brousseau ~ The Dowager Duchess’s decree that her grandson must marry before Twelfth Night or relinquish his title and fortune sends him into a tail spin. Without any prospects and with only two weeks until Christmas will Stuart Nelson find himself destitute or will he find The Yuletide Bride?


Holiday Disaster by Vicki Batman: The week before Christmas and all is in disarray when a librarian experiences horrible plumbing issues and a Mr. Maintenance Man who isn’t nearly as jolly as Santa Claus.

Join all our freebie fun at: Amazon


Find Season of Promises for 99 cents at: Amazon


Find Season of Surprises for 99cents at: Amazon


Posted by Vicki Batman, sassy writer at 2:30 AM 7 comments:

Excuse me while I have a Mom Brag Moment.

Most of you know my son is in band. He plays bass trombone. For the band kids, their summer is over at the end of July when they start practice for the upcoming marching season. These practices are intense, let me tell you.

Before school starts at the end of August, they are out there from 8-11 am and then 1-4 pm and every other day 6-9 pm. DAILY. Then school and football starts. By the end of September, there are competitions every weekend with practice after school almost every day.

These kids work so hard. They are so incredibly talented, too.

On October 28, they had Area UIL Marching Competition. It was cold that day and windy but the husband and I were there watching and freezing. They did great in prelims and made finals. So back we went that evening. We sat through all 7 bands that night and FROZE OUR BUTTS OFF.

But it was worth it. Richland High School was not only named Grand Champions, but advanced to UIL State Marching! The last time the band advanced was back in 2012, so this is a pretty big deal. Birdville HS also advanced. We’re hoping to see both school in the finals.

Their marching show is awesome. I love watching them perform. The band directors are incredible and its obvious they love their jobs (and the kids!). It’s proof that all that hard work has paid off and they have achieved something only 35 other bands in their division have achieved.

They perform Wednesday, November 8 at 3:45 pm in San Antonio. I’ll be cheering and watching via the live stream. A lot of hours of practice and rehearsal have gone into this show and I just know they’re going to kill it. Go Rebels! 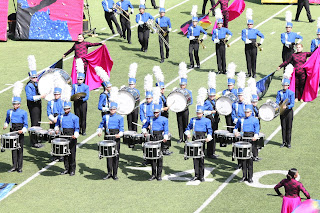 Posted by Michelle Miles at 4:00 AM 3 comments: