Liese Sherwood-Fabre on How My Children Became Bilingual

How My Children Became Bilingual

I met my husband when I was studying at the National University in Mexico City one summer. One day on a city bus, I recognized another woman from the school and struck up a conversation with her. She was planning a birthday party and set me up with one of her boyfriend’s friends. Four years later, I married my one and only blind date. I was still in graduate school when we married, and my husband wanted to pursue an MBA while I completed my doctorate. Because he had to sharpen his language skills to pass his English test, we spoke that language at home. When the children came along a few years later, we found ourselves drifting into English out of habit.

Early in our marriage, my husband and I jokingly worried our children would speak Spanish like me and English like their father. Since we primarily spoke English as home, we truly didn’t have to worry about that language, but they might have not developed their Spanish skills had we not moved out of the country when they were still young.

In 1989, we moved to Honduras. Our oldest was about to start kindergarten and the younger one was just learning to talk when we enrolled them in a small bilingual school in Tegucigalpa. Our older son was one of two native English-speakers in his kindergarten class. His younger brother switched his few words to Spanish. To ensure they didn’t forget their English, we continued to speak primarily that language when alone, but Spanish when others were present. Both boys soon could switch between languages with ease, sometimes mixing the two and inventing their own words in the process. Things were “swoft” (a combination of “suave” and “soft”), and my younger one would ask for his “shoepatos” (a combination of “shoe” and “zapatos”). 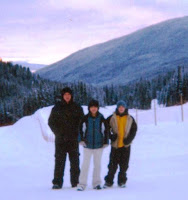 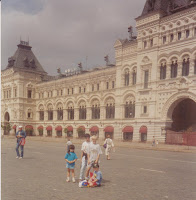 After five years of living in Spanish-speaking countries, we moved to Russia, but they never lost their ability in Spanish, adding some Russian and French into the mix. We are quite grateful our original fears about their language abilities were never fulfilled.

Do you or any in your family speak a foreign language? How did you learn? Leave a comment and be entered for a chance of my new book Saving Hope.

Liese Sherwood-Fabre grew up in Dallas, Texas and knew she was destined to write when she got an A+ in the second grade for her story about Dick, Jane, and Sally’s ruined picnic. After obtaining her PhD from Indiana University, she joined the federal government and had the opportunity to work and live abroad for more than fifteen years—in Africa, Latin America, and Russia. Returning to the states, she seriously pursued her writing career and has had several published pieces. Her debut novel Saving Hope, a thriller set in Russia, will be available from Musa Publishing on May 4.
Saving Hope Blurb: In one of Siberia's formerly closed cities, Alexandra Pavlova, an unemployed microbiologist, struggles to save her daughter’s life. When she turns to Vladimir, her oldest friend, for help, she's drawn into Russia’s underworld. His business dealings with the Iranians come to the attention of Sergei Borisov, an FSB (formerly the KGB) agent. Alexandra finds herself joining forces with Sergei to stop the export of a deadly virus in a race to save both her daughter and the world.
Posted by Vicki Batman, sassy writer at 1:00 AM

Good morning, sweetie! I find it exciting you lived so many places, yet it had to be hard too with children.

Also, you've had kids,jobs and write. How do you find the time?

Congratulations, on Saving Hope! I'm happy to say I've read it and loved it.

When I was in Russia, I would write on the bus to and from work and then type up what I'd written at night. By the time I got back to the States, my children were older and I could find an hour or two several nights a week (Saturday mornings were also a good time).

I think my children enjoyed all the places they lived and visited. When we lived in Mexico, they had family, so it was more like home.

I lived in Madrid for my junior year of college and enrolled in their Courses for Foreigners program where we took classes with all the other Spanish students, taught by professors who did not speak English. Our common denominator with the rest of the students was the Spanish language. Total immersion! And a wonderful experience. My two kids don't really like languages and find them too hard to get.
Oh well....

Interesting topic for a post. My wife and I speak a little of our ancestral languages (Italian, Albanian and Greek), but not exceptionally well. Our son is definitely going to learn Greek because we have the good fortune of having Greek school/tutors available in our church community. I think it's important to maintain the language as part of the cultural heritage in the home. Also, let's face it, it's a great brain exercise for the little ones and it never hurts to know an extra language!

Wow! What a fascinating journey. You have given a gift to your children that is invaluable and they will forever be grateful (whether they realize it or not). I took Spanish in High School and some in college. Unfortunately, outside of English, the only other language I've become fluent in is sarcasm. Not much of an asset in building relationships in real life but works wonders with my characters. Hehehe. (teasing).

Thank you so much for giving us an insight into your world. The experience must be so fulfilling.

I don't know if our children would've ever become fluent if we hadn't lived abroad, but there's no better time to learn a language than when young. I had training in French and Russian also, but unless you use it on a regular basis, it's hard to keep it up.

Hi Liese, interesting post. I learnt French at school, that was later much improved by having a half-French partner and spending time in France.
My son is keen on languages and learnt Japanese for two years. I got him to teach me (and he loved knowing more about something than Mum)and, never having tackled an Asian language before, found it completely captivating!
My son is now learning French at school and it isn't his prefered language...but I'm hoping a school trip to France next year will lift his enthusiasm. :)

I'm a language klutz. I think in pictures so I have trouble even with English - I'm always translating.

But my middle son, unlike his mother, seems a natural at languages. He traveled to Korea at 17 and learned Korean. Now, at 22, he lives in Taiwan and is learning two different Chinese dialects, and also speaks Japanese.

Yikes! It boggles my mind.

I'm so impressed with children who have learned Asian languages. Russian cyrillic was hard enough and some of those letters were the same!

You've had such a cool life, Liese!

I speak French and a little spanish and Italian. all from school. (I double majored in French and studied in Paris during my junior year of college.)

DH is Taiwanese-American, but refused to speak Mandarin at home growing up, so he barely knows any. :( I hope to send our kids (2 1/2 years and 5 months) to weekend Chinese school.

Our 2 1/2 year-old goes to preschool, and they have a weekly spanish class.

foreign language study is important to me and has been from an early age. My grandma was a HS Spanish teacher.

Wow, Liese, you've led an exciting life. Nope, I'm a language disaster. Took at least 7 years of Spanish in school all through elementry, middle and some into high school and can't speak it at all. LOL

I really wish I could speak another languge, but my brain just can't handle it at this point. Great blog post.

Amanda and Kathy!
Thanks for stopping by!

I really do believe immersion forces you to learn. I really became fluent when my boyfriend (later husband) spoke no English and we had to communicate some way!

When I grow up, I want to travel as much as you! :) LOL. My daughter is bilingual as well, thanks to our nanny. This fact normally fills me with pride, however, she's now started speaking to me in spanish - and shes's so fluent, I can't understand her. She rolls her eyes and thinks it's funny. I'm actually a little frightened that when her sister gets older and learns to talk, they'll be fussing about their parents to each other, and we'll never know the difference! :)

Perhaps an incentive to learn yourself! :)

Liese,
How neat to live in several foreign countries and see how other people live. You have had a very interesting life. I took one year of French in High School and I can say Qui? That's it.

What a great love story. I think it;s awesome that your kids can speak not just one but several different languages. I've lived in several countries but I never learned any of the languages (was never really there long enough.)

When my daughter was in the fifth grade, a new girl enrolled in her school. The young girl had been adopted by missionaries and brought to the U.S. from Argentina. She spoken very little English. My daughter befriended her and both learned to speak each other's language. My daughter majored in Spanish in college probably due to the influence of her best friend. They're still friends 20 years later.

What a neat life story, Liese. You are blessed to have such wonderful family qualities.

No one in my family have such language diversities.

What a fabulous journey you, your husband and kids have had! Teaching your kids a second language is an invaluable gift. And giving them the opportunity to experience and live among different cultures will only help to open their minds to new ideas and new people. They're ahead of the game! :-)

My older two daughters have had the chance to study abroad now that they are in college, and I know their studies have been enriched!

Congratulations to PrisaKiss, winner of a copy of Saving Hope!

Too funny! Thanks, Liese and Vicki!

The "funny" my comment referred to was the quote "worried our children would speak Spanish like me and English like their father," but that part got lopped off when I posted. :-/