Get to Know: Melissa Ohnoutka & Target of Betrayal

How did you get from your day job to writing romance?  My day job was raising two baby girls under the age of three at the time, so it was a ploy to save my sanity. J Still waiting to see if it worked!

What are your three favorite books of all time?  Rebecca By Daphne du Maurier, Wuthering Heights by Emily Brontë, Jurassic Park by Michael Crichton

Music--with or without? What kind? Definitely with and it depends on the scene. I love the sound tracks from Pirates of the Caribbean and Inception.

How's tricks? Do you juggle multiple projects? I am my worst enemy. LOL I have several projects going at once or I’m not a happy camper.

What's harder: beginning, middle, or the end? End – I write complex stories and tying up all the ends can be quite a struggle at times.

Revisions: Love 'em or hate 'em? Not my favorite part, but the end result makes it all worth it.

How did you come up with that title?  Best advice anybody every gave you? Target of Betrayal was the second one for this story. It just snuck up on me when I reached the end.

And the best advice…”Write a great story and then start the next one.”

Fill in this blank: My ideal fictional hero would think me gorgeous no matter…what silly words came out of my mouth. I tend to mix letters and entire words around when talking too fast and the end result is quite comical according to my kids. Example: gigabyte + Ram = gigaBam. J 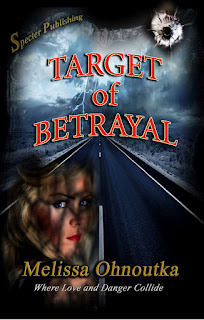 Kathleen Landon thought her life would finally get back to normal after the bizarre death of her husband. But a "chance" meeting with an old boyfriend throws her and her family on a dangerous and emotional journey full of secrets and betrayal. Her husband's death wasn't an accident, but an attempt to cover up a horrendous crime spree being operated by a traitor inside the FBI. Now she and her children are running from a cold-blooded killer. Can she trust the U.S. Marshal sworn to protect them? Or is he using her as bait to capture her husband's killer?

David Thomas worked for the FBI for over ten years before storming out of the office of his superior and telling him where to stick his accusations. Now David has joined the U.S. Marshal's Special Operations Division. He is working to expose an informant hiding in the FBI ranks. David is the perfect man for the job. A man riddled with guilt. His decision cost a friend his life and David is determined to protect the family left behind. What he doesn't count on— is falling in love.

Hi, Melissa! Love having you at the PP and learning more about you and your book. It sounds awesome. And Rebecca is one of my all-time favs!!!3

Thanks so much for letting me visit, Vicki! :) I always love reading the posts here on Plotting Princess. A good friend actually got me the DVD version of Rebecca. So cool! :)

I can see "gigabam' in the dictionary one day! Perfect description!

LOL Thanks, Will! So far I've only said this one around family. :) Can you see the face on the poor guy at Best Buy as he tries to figure it out? ack!

That was a neat peek into your life as an author. I also struggle with tying up all the loose ends of a plot with twists and turns...always feel like I'm forgetting something! Ha-

Hi Melissa! Cute interview. I love someone who can make-up words. I don't have that skill and it is a skill! But at least I know who to turn to when I need a fake word that sounds real. :)

Melissa, thank you for reminding me that this revision will be worthwhile. Guess what I'm doing right now? Fun interview--great distraction--now back to work for me!

Hi Melissa! I, too, am a Daphne du Maurier fan. Making up words is a great talent for a writer to have. Target of Betrayal is on my TBR list!

Wow, so nice to have lots of your fanfriends visit, Melissa. And I have to say I LOVE your photo. Very glamorous.

Hey Cyndi! Thanks so much! :) Anytime you need a new word, just give me a call. LOL

Nancy, so glad I could help. LOL Best of luck with those revisions! I know you'll make that story shine! :)

Thank you, Tess! Supply and demand...hmmm. Does that work with words too? LOL So glad you enjoyed Target of Betrayal! :)

Pam, thanks so much! I'm loving all this support! :) Must tell my kids I'm doing the world a favor here by making up these words. LOL Hope you enjoy Target of Betrayal. :)

Hi Melissa. I laughed about your funny words. I do the same thing and not always intentionally. Sometimes I get giggles and sometimes I get puzzled looks. Either way, I can't stop, so it is what it is. Hopefully it's endearing. Ha!

Absolutely love these types of interviews! One of those, just sit back and be entertained type and yours certainly did that.

Melissa, you are too cute and very clever. Your book also sounds fabulous.

Hi, there Missy!:) Great learning a few extra tidbits about you:) I love Rebecca and Jurassic Park too...John grabs his head everytime the movie version of Jurassic Park comes on...he knows I'm always going to opt to watch it:) lol...What "is" that? Can't get enough of a good thing?:)
I loved the part about you making up words. I don't do that, but I do type dyslexic...only type, I don't read that way or write that way...another what "is" it? I've quit trying to understand the whole thing, I just know to listen to spell check when it goes crazy:)
And, back to you speaking in Melissa language, heck that's what make writer's who we are...we're creative (thank God:) and it keeps conversations flowing, along with laughter for some of us!
Lo

I only listen to movie soundtracks on the rare occasions I write in public and need music to block stuff out. I love the POTC soundtrack, but hadn't thought about Inception! I'll check it out!

Great Q&A! I love finding out new things about friends I adore!

So are you the one that came up with words like beardo, manscaping, and e-clap? LOL! Yes...those are real words...

So glad to hear I'm not alone, Pamela! :) The funny looks are the worst! I'm still trying to figure out what I actually said while trying to order Boar's Head Honey Glazed Turkey the other day. LOL The expression on the poor lady's face who was helping me said it all. Major error....I just smiled although I was dying inside!

That's so sweet, Karen! Thank you! :) I like interviews like this as well. You never know what you'll learn about someone you thought you knew. LOL

"Can't get enough of a good thing?" I think that says it perfectly, LO! :) And hey! Laughter sure does make the world a better place, right?

Hi Natalie! :) The Inception track is perfect for action and those really eerie scenes. I like soundtracks because they usually don't have words to distract me. LOL

Welcome to the Plotting Princesses. What a great interview. I make up words too, but not nearly as cleverly as yours!

I never write to music, since I work with headphones on all dayy long. For me the quieter it is the more productive I am.

Hey there, Jenn! Aww...now I'm gonna get all emotional. LOL Love ya too, girl! No, I can't take credit for those words, but I like them! How about fudgebucket, awallago (a while ago), dingers (those who leave negative reviews. lol)

Thanks, Kathy! Peace and quiet...now that does sound nice. Sure wish I could figure out how to find it around here! LOL I keep telling myself that one day sooner than I like, it will be way too quiet and I'll be wishing someone would say, "Mom!" :)

Homemade apple pie? I'm with Keri, you can bring some over to Louisiana any time. LOL

Thanks, Keri! :) I've been wanting some hot apple pie all day now. LOL

One thing about apple pie...it travels well, Liz! :) I'll have to whip one up next time I head to the Nola Stars Conference. LOL Thanks, girl!

That's cute how you mix letters and words around. Love it!!! That might be fun for you to incorporate into a character in one of your books.

The main antagonist in my first series always got her metaphors twisted up. It turned out to be a fun character element.

Your viewpoint is the most accurate, but many people agree with you. You write well; I enjoy reading it. This content was engaging to a beginner because of its writing style. Using such effort, we are glad to present you with new information, which turns out to be a fake Twitter chat, where you can display your conversation without anyone else participating. To learn more, click here: Fake Twitter Chat Generator