Never Give up! Never Surrender!

That quote from the movie Galaxy Quest has always stuck with me.

Like most people, I’ve had some adversities in my life to overcome. An abusive boyfriend, the loss of a baby, teenagers… (hey, don’t underestimate the heartache they can cause)
My mother used to say “Pick yourself up, dust yourself off, and start all over again.” That quote, from a popular song when she was a child, was her generation’s version of “Never Give up, Never Surrender.”
And sometimes we all have to choose, when we’ve been beaten down by life, whether we’re going to pick ourselves up and start over, or whether we will surrender.
Being a writer puts that choice to the test almost daily. Whether you’re published or pre-published, challenges are ready to knock us down. It could be a scathing rejection (or any rejection) from an editor or agent. It might be a scene you’re working on that’s just not coming out right, or it could just be life interfering with your writing time.

Because I sold the first book I ever wrote, I had only received 2 rejections before becoming a published author, and some might ask, what do I know of rejection?  But becoming published doesn’t stop the rejections. It took me 3 years to sell my first book. It took me another 3 years to sell again. 3 long years of rejections. Rejections where I really got my hopes up. Where I was completely shocked because my editor had asked for revisions and told me she loved the story, but ultimately it just didn’t work for the senior editor. I had to pull the knife out of my heart on that one. Curl up and cry and eat lots of chocolate.
But eventually, we have to un-curl ourselves from the fetal position and get back to the keyboard. That’s the only way to make it in this business. Almost every writer friend I know has done so, as well. From putting a beloved manuscript under the bed and starting over with a fresh story, or completely reinventing themselves with a different publisher after their house closed a line. 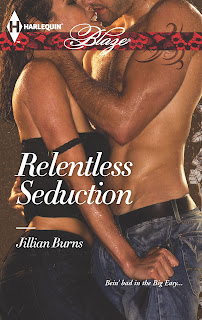 The publishing industry is going through a huge change right now. In the past eighteen months, self-publishing has gained respect. It no longer carries the stigma of unprofessionalism it once did and many authors --even bestselling authors-are finding it a viable and truly profitable option. And there are many new publishers emerging that publish mostly e-books. Authors have many options above and beyond selling to the traditional New York publishing houses. But so many choices can be paralyzing. There are still so many unknowns. It’s scary. A few authors are making hundreds of thousands of dollars self-publishing. But it’s a big risk. One could sink hundreds of dollars into hiring a cover artist and an editor, all with no guarantee of ever making a dime. And that can be even more difficult to try if one already has a contract with a publisher that pays an advance, even if the royalties are much lower. It can take a lot of courage not to be overwhelmed. To try new things.
One of my all-time favorite authors, the grand dame of gothic romance, Phyllis Whitney, died recently at 104. I remember the excitement of going back to the library for her next book, and curling up to read every book I could find of hers in the summers of my youth.
When I received an email with a link:http://www.nytimes.com/2008/02/09/books/09whitney.html?_r=3&ref=obituaries&oref=slogin&oref=slogin&oref=slogin
to an article about Phyllis Whitney’s life and legacy, memories washed over me and I realized she was part of the reason I became a writer. Then I read the last paragraph of the article and it seemed like Phyllis was speaking to me.

“Ms. Whitney ascribed her success as a writer to persistence and an abiding faith in her abilities. “Never mind the rejections, the discouragement, the voices of ridicule (there can be those too),” she wrote in “Guide to Fiction Writing.” “Work and wait and learn, and that train will come by. If you give up, you’ll never have a chance to climb aboard.”

Jillian Burns likes to think her emotional nature—sometimes referred to as moodiness by those closest to her—has found the perfect outlet in writing stories filled with passion and romance. Her newest Harlequin Blaze, RELENTLESS SEDUCTION will be out in January 2013. For more information and excerpts you can visit her at: http://www.jillianburns.com
Posted by Vicki Batman, sassy writer at 1:00 AM

Hi, Jillian: To get something we really really want, we have to persevere. You did and it is paying off.

BTW, I read all Phyllis wrote too.

I'm pretty tenacious, like you. However, I'm not typically as positive. But I'm working on it.

Wow! What insights and words of inspiration! Thanks, Jillian! I'll keep these with me when I get down.

Hey Jillian, congratulations on your first blog with the Princesses. I wholeheartedly agree with never giving up. Just like you, I sold the very first book I wrote, but subsequently the rejections rolled in. They can be brutal, especially if you've poured your heart and soul into the story.

Pick yourself up, dust yourself off and start all over again should be every writers mantra.

Great post. (I read Phyllis, too, she was awesome!)

Pull up your big girl panties and get back to work.
Congratulations on staying the course

Hi, Jillian--Great post and topic. Besides a gift for words, persistence is the most important tool in a writer's toolbox. I sold my first two books on a single phone call--and then it took me seven years to sell again. I did almost give up, but then this new story kept poking and prodding me until I sat back down at the computer. That was my next sale. If I hadn't listened, I would have missed that train Ms. Whitney mentioned. ;-D

Awesome blog post! Fantastic advice! Happy to have you here at the PP today! :)

I also sold the first book I wrote--not counting the 600-page single spaced every-plot-in-the-universe tome that's under the bed. That was in 1994 and it's been a long dry spell since then. But I've never quit writing, and though I'm not as tenacious as you and Pam, I do believe that Someday I will sell again. Your optimism has rubbed off on me. (grin)

Thanks Jillian, Great post. I agree you never give up. I've had a number of life challenges and they still keep coming. Yet, I will battle them.

I will also take that war to my writing. Yes, rejections hurt and make me disappointed, but I finally come back and "Hey, what you really know about my writing anyway? Obviously, nothing." So I keep kicking!

What an inspiring blog. I love Phyllis Whitney and have read all her books. How did I miss that she died? That makes two of my favorite authors now, Whitney and Tony Hillerman, who have died.

It took me 10 years to sell my first book and 4 more to sell my second. I know about persistence. Early in my writing career, I read a quote that has stayed with me and inspired me: Writers who quit never get published.

Congratulations on your success.

I sold the second and third books I wrote. I'm re writing the first one as we speak. No, I never thought failure was an option. We (10 of us) were raised to push forward, not to look back. It's worked well for me. After quardople by-pass heart surgery and 3 stents, I don't have enough time to sit and whine. I have so much I still want to accomplish in life. Life is a gift, that I treasurer every day. Good luck.

Jillian is attempting to respond, but she's having computer difficulties.

Great food for thought, Jillian. And I love what Phyllis said. I received so many rejections, it made my head spin. But, like you, I persisted, and finally got a contract. Who knows what the future will hold for me, since I also am leaning in the self pubbed direction.

I like that too: Never give up, never surrender.

I do not give up but as I am older I take one day at a time. sue Leech garysue@dejazzd.com

Great advice! I needed to hear it!!

Thank you SO much, Jillian, for this wonderful post. I didn't even know one of my favorite authors died! I had no idea. I haven't read much of Ms. Whitney's novels in recent years and now I want to see what I can find. I clicked on the link about her life and want to thank you so much for that. Really cool.
Patti

Late to the party again. I feel like I'm on speed this week. I'm taking Kristen Lamb's Blogging Class and she had us ask our family members how they saw us. My husband said driven and my step-son said I was determined. Hell yes, I am. You may not like my books, but by golly, I'm writing them. I may be the only reading them, but they're out there for my enjoyment. Great post Jillian.

Such great advice, Jillian. Some days, it's hard to remember to push aside those negative voices (internal and external!) but the more we do it, the easier it becomes. Thanks for the uplifting post.

Awesome blog! Is your theme custom made or did you download it from somewhere?
A theme like yours with a few simple tweeks would really make my blog jump out.
Please let me know where you got your theme. Thanks a lot

Here is my webpage - http://torontowineeducation.com

this blog is excellent i really like reading your posts. Keep up the good work! You recognize, lots of people are searching round for this information, you can help them greatly.I will be writing more about this at http://agilecustomwriters.com/