On the last panel I sat on, the defense attorney picked apart every single phrase of the charge and did so with every potential juror. This went on forever. I swear the judge napped. So when he got to me, he said, “And here’s the juror with my favorite last name.” Everyone turned around and looked. “Batman.” Being polite, I nodded. He began his shtick of dragging things on. I’d had enough especially in light of him focusing on my last name. I said, “If you do your job, and she does her job, I’m positive I can do my job.” 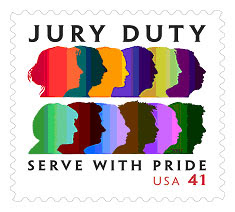 The attorney was shocked. The judge chuckled. The other potential jurors went, “Yea, what she said.” Obviously, they’d had enough too.


He continued on and on. Finally, we broke for lunch. Great relief.


After lunch, he started his spiel again. This time, another man commented about how the whole process was dragging on and several other jurors said again, “Yea, what he said.”


I think the attorney got the message. He sped his program up.


So after all the time waste, we were sent to the hallway to wait. Then names were called out, and the people picked for the jury were the ones I’d label milquetoast. Nice, plain, ordinary folks. Not troublemakers like me and the other guy and the engineer on the first row who could calculate the space between sprinkler heads. LOL


Have you ever served on a jury?

In Temporarily Employed, my romantic comedy mystery, Hattie has to go to court and fun stuff happens. Find TE at: Amazon

When I lived in Buffalo, NY, years ago, I was called for jury duty right after the dreaded Blizzard of '77. Had to park my car in a lot, trudge through waist-high snow and then take a bus to get to the court house. Only a handful of dedicated souls turned up so...you guessed it...I had to serve. I think we could have been former mass-murderers and they still would have used us.

oh my, Laura, that is crazy. And funny. And memorable. Thank you for serving. :)

I served years ago and hung the guy. It was a waste of time, money and my entire day. The man didn't have a chance and he knew it because he was guilty, but he thought he could play the system, which happens in some cases.

Hi, Judy! Well, you did your duty and that is good. I went to pay tickets in court one time. I was hugely pregnant with #1 son. The man in front of me was on crutches. He left. My turn came and I paid and left. As we exited the building, the guy stuck his crutches under his arm and walked to the parking lot. Geez.

Very timely post. I spent all day yesterday up at the courthouse because sister got called for jury duty. The weather was so bad, I didn't want her to drive all the way up to McKinney alone, so I said I'd ride with her, figuring we'd probably be out of there by noon or so. Yep, you guessed it. She got called and had to sit on a jury case. So I basically sat out in the deserted hallways from 8:30 until after 5 o'clock. Good think I had my e-reder with me. LOL That will teach me to think before I agree to something like that again. There wasn't even anybody else around in the halls, just me. Although I did get to see the police slap handcuffs on somebody right before they called everybody in to start jury selection. That was pretty much the highlight of the day, because the rest was sitting around doing nothing but reading and checking my phone. LOL

Hey, Vicki. Yes, I had much the same experience you did. I wanted to yank up the lawyer by the collar and say, Get on with this! And do you know what a stupid question that is? I was very distressed by my last time because the lawyers seemed so inept and the judge though he warned him a couple times to get on with it, never stopped the guy. Before we finished the judge declared they couldn't get 12 unbiased jurors from the group of 30.I'm convinced they could've. There were at least 12 people who didn't have an issue with chiropracters, but it got me out earlier. Just wasted the taxpayers money.
I guess like in any profession there are good folks and not so good folks.
Congrats for giving it back to your lawyer. He deserved it.
I'm called every couple of years, but being married to a lawyer and a writing romantic suspense, I seldom get impaneled. I shared.

In Delaware you have to have a drivers license to be called for the pool. I've been called lots of times but served only once. When I was working I knew every psychologist and psychiatrist in the state so I was often excused if there was one associated with the case. Thus I missed all the interesting cases.

I have been called but I haven't served yet. Like you, college and the little ones took providence. Of course, now Karma will find me. But it will just end up as fodder for a future book!

Hi, Kathy! You are so kind to sit with Mary and I don't doubt she was selected because she's so nice. Thank goodness for e-readers.

Hi, Marsha! I don't get a judge letting a lawyer drag things on. Is he being paid by the hour and that's why??? OOOH, chiropractor cases are interesting. I saw it from the insurance claims end when I worked at that business.

Hi, KB! Delaware is small compared to where I live. That's too bad you weren't selected because you might have a good story to tell.

Hi, Melissa! It's great fodder! I used my experiences in Temporarily Employed. Well, I embellished them too. LOLOL

Oh I've been called to jury duty fortunately I have not had to serve on a jury. I always bring up my law-enforcement background but not even that works anymore... LOL

Long, long ago, I was called up for duty. At that time, you served for 14 days regardless of how many trials you sat. Now PA has a one-and-done rule. I ended up on three panels. A lot of it was boring, but the last one involved the first trial under a new law. That was interesting; even the news reporters came for it. I was most impressed with the conscientiousness displayed by the jurors. Every last one took the job seriously, even in the shoplifting case. It was probably the brightest ray of hope in the entire process.

Hi, Nikki! How interesting about serving for fourteen days. Ours is one and done rule too. I've sat through deliberations and you are right about how the jurors take the job seriously and want to do the right thing. Thanks for stopping!