Within the first few pages, readers want to know where the story is taking 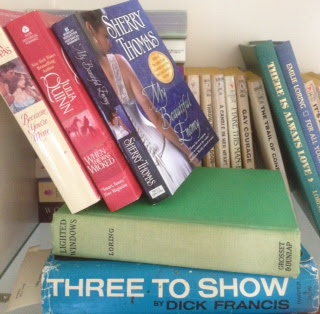 place, what scholars call the setting. Setting draws a mental picture in the reader’s mind. It establishes whether the story is dark or light, small town,  big city, or country. What season of the year. What time of day.
One of my favorite romance authors is Emilie Loring who wrote stories back in the thirties and forward. While vacationing recently, I picked up Lighted Windows and written upon the first page is this:


Fifth Avenue. In that quiet hour before dawn when for a trifling interval the city dozes, it never sleeps. The gleaming asphalt, blanched to silvery whiteness by arc lights, stretched ahead illimitably between looming skyscrapers, phantoms of concrete and steel, brick and glass, shadowy and unread as the back drop in a pantomime.
Instantly, we know where the author is speaking of. The reader is transported to New York, and specifically, Fifth Avenue, a popular street, in the wee hours of morning when all is quiet.


Here are some sentences about setting:

Temporarily Insane by Vicki Batman. I walked to the sofa table positioned in front of the picture window. Sitting on top were various brochures and today’s newspaper. The bold headline caught my eye, hooking me into reading further. The opening paragraph said something about a lead on a case involving an accountant who’d been found dead in Louisiana, apparently poisoned. Was the saying the only good accountant is a dead accountant true? iBooks

Adam by Chris Keniston. The sun rose higher in the sky, casting a warm light across the dry Texas dirt. More than looking for the dog, Adam searched for something the dog could use for shelter but there wasn't a blessed thing large enough to hide anything the size of the animal he'd seen moments ago. A few feet farther, Adam stopped to look back. He could no longer see the expression on the bride's face, but he could feel the intensity with which she watched him and the barren land around him. Probably jilted on her wedding day, definitely stranded in the middle of west Texas cattle country, yet her only concern was for an injured dog. Adam

Shattered by Liz Lipperman. “Out of my way,” he sneered, shoving her to the ground.
“Hey, mister, watch where—” Jenny slammed her mouth shut when he shot her a venomous look that sent chills up her spine. Chills that had more to do with the evil in his eyes than the temperature in the airport terminal.
Turning back to Villegas, the man with the birth mark pressed his gun into the Texan’s stomach, leaning his body in until his face nearly touched the businessman’s. Eyes wide and breathing faster, Ramón did a one-eighty around the room, as if deciding what to do next.
“Welcome to Costa Rica, asshole. We’re here to escort you to hell.” Amazon

Demon Cursed by Karilyn Bentley. “Is the ref smoking dope?” T asks, sloshing beer over the rim of his cup as he uses it to point at the field.

“Sure seems that way.” Clearly the refs were in cahoots to prevent us from winning.

The woes of being a die-hard football fan: seeing conspiracy theories at every call.

I glance over my shoulder, into the suite, where mage Aidan Smythe sits on a sofa, his feet propped on the coffee table, surrounded by empty beer bottles and cups. Smythe’s fingers fly across the keyboard of his laptop. Only my mentor would show up to a football game and perform Internet searches for demon activity instead of watching the game.

Saving Hope by Liese Sherwood-Fabre. Their boots echoed through the building’s narrow stairwell, then thudded on the courtyard’s frozen mud as they crossed to the corrugated metal container holding their prize possession —a dull green Lada automobile.

Yuri grunted as he shoved back the top to reveal the car. Once they’d settled inside, he played with the choke and the gas pedal for several minutes before the car’s engine finally whined to life. With a lurch, he steered the car out of the small garage and over the icy ruts into the Siberian night.
Only a few other cars’ headlights, resembling insects’ yellow eyes, flashed past them along the way. Amazon

Refuge for Masterminds by Kathleen Baldwin. Stranje House is an odd place at night when everyone is asleep. It’s as if the old Tudor manor is alive the way it creaks and the windows shudder. I tiptoe in the dark downstairs to the kitchen. Thin gray moonlight whiskers in through the windows and I breathe deep the lingering smell of baked rye bread and onion soup. But something yanks my attention to the window above the baking table. It might’ve been a wisp of fog, or an owl soaring by to catch a mouse in the garden, except it had seemed bigger. If I were prone to fanciful ruminations, I might’ve thought a phantom flitted past. Amazon

A MERRY DEVIL in Tempted at Christmas. The French had a word for it, of course, being the French and the damned enemy, though they were only a day’s sail away across the Channel. The coup de foudre they called it—the stroke of lightning, the moment of force when everything changed.

Everything had changed the first moment Matthew Kent had seen her, the long tall girl striding along the quay in the chilly dawn light. Though it had been more than a month ago, he remembered it as if it were that very morning—the air had crackled with charges of energy that had made it hard to breathe, his vision had sharpened and gone fuzzy at the edges all at the same time, and his legs had felt suddenly unsteady, as if he had stepped ashore for the first time in weeks, instead of in days. As if he had been struck by lightning. Author Central


Is there a book or author whose work you've read that evokes emotion in setting? Share with us!

Thanks for sharing all of these! Such different styles and places, all set the tone for the book!

Hi, Liese, and I agree! When different people are doing one thing, writing, yet they each create something totally different.

What great examples. I loved the one about Fifth Avenue...such a way with a description!

Hi, Melissa! Like I said, a writer from the thirties and forties. She had a way with descriptions. Love scenery and dresses.

Great examples of setting! Thanks for sharing, Vicki :)

"Is there a book or author whose work you've read that evokes emotion in setting?" -- oh, yeah...and, too many to name (smile!).

Thanks for sharing these, Vicki. I don't really think about setting too much but now I will since I can see how much it draws the reader in.

Thank you for sharing Vicki!!

Hi, Liz! I think it is so easy to say walked into a room with a brown couch. But to add that was the same one mom had had for twelve years, the same one where she'd first kissed Sam adds something.