Some of you may be laughing hysterically just from the title of my blog because you know I grew up with cats, not dogs. My mom didn’t want to fence the yard for a dog. Our first cat was a huge gray guy named appropriately Smokey. He was born between our wooden and the neighbor’s chain link fences.
Over the years, there were others, like Mischief, Fuzzy, Snuffer. Our last two were farm cats from Kansas named Romper, aka Roo, Roo-roo, Romp, and her sister, Scooter, aka Scoo.
Handsome, however, grew up with dogs. He loves to tell the story of their sheepdog who ate the Thanksgiving turkey (Christmas Story, anyone?). So when #1son was about three, he adopted Baxter, a sheep dog who grew VERY LARGE. Baxter was too big for little kids and no one could walk him well.
After Baxter and Snuffer passed, we adopted the farm girls. They were little and squirmy and perfect for boys’ love. Both had a long shy streak and would hide behind furniture when people came over.
Many years passed and Handsome began to yearn for another dog.
This time, he did more research. I liked the size of beagles, but he said no, he’d found the perfect pet – Malti-poo. They don’t shed, are smart (poodles are second smartest dogs), and are good natured. Off he went one Saturday and came home with TWO??!! I must add I wasn’t too surprised, but this story I had to hear. 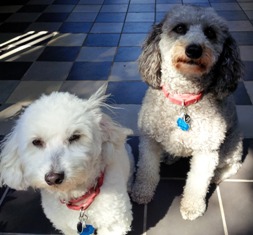 The pups were running in a large fenced area, and the little white one, which we named Champ, seemed to be the ringleader. Handsome was smitten. Then he watched a while longer and saw a slightly bigger gray one watching everyone. His heart was struck and home he came with Jones (yep, like in Indiana Jones).
These two are inseparable. Jones truly pines for Champ when they are apart. Jones is incredibly fast and has caught squirrels, lizards, and birds. Champ is our happy-go-lucky perpetual two-year old. On our walks, he has to mark a spot every ten feet. (I now allow him to have three stops). Jones gulps his food (probably picked up from being crowded out of food as a puppy). Champ doesn’t care. They are tough dudes and rarely complain. For a one-on-one, Champ likes to set his front feet on my chest. Jones will stretch across our laps and sigh contentedly. They followed Roo and Scoo (mostly to sniff their bottoms) and sat with them when they passed. They were easy to train or maybe I was easy to train. LOL. They love everyone.
So, my observation is this: if we ever get another dog, I am letting Handsome pick because these two are priceless.

Do I write pets in my stories? Of course! Real life has real pets. But I did write a hilarious one about a bug. She’s feisty and quick. Check out “Bug Stuff” from Just Desserts…and Other Stories: 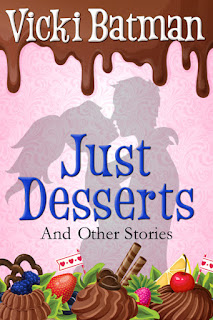 Want more hilarious fun? Find Just Desserts at many e-retailers and at: Amazon

Posted by Vicki Batman, sassy writer at 2:30 AM

What cuties! I love the story of how they came to you. Having two dogs is a great way for them to have a pack, otherwise they are like toddlers-entertain me Mommy! :)

Thank you, Melissa! Recently when I had company, a lady said they looked like stuffed animals.

Your dogs are adorable Vicki!! :)

Thank you, Karilyn. They are good boys--except for the peeing on the porch thingy.

That's precious! And, Handsome can start a second career as a "dog adoption consultant" (smile!). Thanks for sharing.

Ooh, Angela! I'll mention this to him. He'll laugh and laugh.