Get to Know: Miriam Newman & The King's Daughter

Fantasy poetry driven by myths and legends has been Miriam Newman's passion for as long as she can remember.  She was published in poetry before catching the romance writing bug.  She brings that background to her writing along with a lifelong addiction to horses, an 18 year career in various areas of psychiatric social services and many trips to Ireland, where she nurtures her muse.  Her published works range from contemporary fantasy romance to fantasy historical, futuristic, science fiction and historical romance.  Currently she lives in rural Pennsylvania with a “motley crew” of rescue animals. 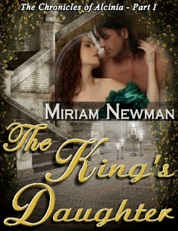 Born to a dying queen and an ambitious king, Tia should inherit the throne of her island nation.  Instead, her country is invaded, her parents are murdered and she is sent in chains to the land of an enemy.

Consecrated to her Goddess, sworn to the service of her country, still Tia finds love in the arms of the enemy.

In a time of war, what will she surrender in the name of love?
EXCERPT:
There was only one direction I could look and that was down the road where we
had just come.  Now someone else was coming straight up the middle so that people
scattered like chickens.  A young, unhelmeted Omani trooper was riding down that road
on a fine long-legged gray horse, bawling in a voice which did not doubt its own
authority.  Though I couldn’t hear the words, I knew what he was saying—troops
were coming and he wanted the way cleared NOW.
I couldn’t clear the road.  I was chained in it and knew my peril.  There was a
curve in that road and by the time they saw me, it would be too late.  My only hope was
that Frado would unfasten the manacles and push me off the road and for a fraction of
a second I actually thought he might do it, if only to avoid trouble with the Army.  He
got free of a woman who had been throwing melons at his head when she ran for her
life and came back beside me, but he was still in a fury and it was only to punch me
in the face.
I heard the gray horse score the cobblestones, launching into a full charge.
flew where his metal shoes beat on the stones as he came like evil incarnate,
ears pinned and teeth bared, head snaking as he went straight for Frado.  Fat as he was,
Frado could by no means get over the wall on my side of the street and started to
trundle to the other side and, with that, the horse was on him.  He was obviously a
well-trained cavalry mount and I thought the rider meant to let him savage his target.
But at the last moment the trooper swung his horse just enough to clear Frado, jerked
his foot from the stirrup and kicked the slaver squarely in the back at a speed just under
that of a battle charge.  The force was so great that it picked up that mountain of a man
like a doll and deposited him face down near the opposite side of the street.
My vision had taken on the preternatural sharpness that precedes seeing nothing
and I saw in heart-stopping detail the first of what seemed like a hundred horses coming
around the curve at a fast canter.  If I had been in better condition, I would have
wondered why a number like that was coming at such speed through a country at peace,
but just then I was in no condition to care.  I lay there like something thrown on the
midden heap.
That point man didn’t have the job, though, because he was slow or stupid.  I
heard the noise of his horse coming back and saw a boy no older than myself with a
shining mane of chestnut hair already dropping from his trotting mount and running
towards me with the horse close behind.  With no time to spare, he clucked his horse
over me in the position a war horse takes to shield a fallen rider, dropped the reins
and threw himself on top of me.  He was protecting me with his body, arms curled
over my head, pulling my face into his chest, so I saw little of what followed, but I
heard it:  the tremendous din of all those horseshoes, riders cursing, horses snorting
in surprise, and the squealing and kicking of the horse over top of us.  That boy was
holding me like a lover and I could feel from his involuntary shudders that he was
inches from death, but he never moved and neither did his horse.  The troopers didn’t
want to kill their own man and horses listen to each other better than they do to us, so
between the efforts of riders and the violence of the gray horse trying to save his rider
the line shifted and passed and I was still alive.
***
Book II – Heart of the Earth – available in pdf/Kindle at www.miriamnewman.com – click on Books tab
Video:  http://youtu.be/JOLyEv1eHow
Review:  www.rochellesreviews.blogspot.com/2012/02/kings-daughter-by-miriam-newman.html
All digital formats and Print:  http://rebeccajvickery.com/online-store.php
KINDLE: http://www.amazon.com/Kings-Daughter-Chronicles-Alcinia-ebook/dp/B0079JHX28
SMASHWORDS:  https://www.smashwords.com/books/view/132900
LULU:  www.lulu.com/product/ebook/the-kings-daughter/18892069
www.miriamnewman.com
http://www.facebook.com/#!/pages/Miriam-Newman.139653729938
https://twitter.com/#!/miriamnewman
Posted by Vicki Batman, sassy writer at 6:00 AM

Thanks for sharing Miriam. And I love that you travel to Ireland to satisfy your muse. My muse is still pleading with me to take my dream trip to Greece. :)

Thanks, Sylvia and Sasha. Sasha, I really hope your muse gets her way and you go to Greece. I am hoping to get to Scotland next year and although I had always thought I was impervious to the pull of Italy---not. Nobody can ever take those memories from you and I owe Ireland big-time for sparking The King's Daughter and the sequel, Heart of the Earth.

What a powerful excerpt! Gripping. I can certainly see the poet in your style and the passion you have of horses (one I whole-heartedly share).

Italy will always own a part of me although I've never been to Ireland but I'm sure however different the charm it would be no less powerful.

Thank you for the insights into your writing. Artists are such amazing creatures in their individualism.

Hi, Miriam, and thank you for visiting with the PP. Congratulations on your new book!!

Hi, Liese, Karen and Vicki. Vicki, a big thanks for having me on your blog today. This book really did have a lot of substance behind it. In its former incarnation as an ebook only (this time it's in print, in a few days) it won a lot of awards. So I hope anyone who gets that and the sequel will be happy with them. I have a review on Amazon right now that made me laugh because the reader said she became the main character. That's what we want!

Great to have you here at the PP blog today.

What a lovely compliment that somebody gest so immersed in your story that she becomes the character.

The book sounds terrific, and the excerpt is vivid and realistic.

Thank you, Kathy! My other reviewer on Amazon issued a Kleenex alert, and I have to admit getting a little soggy over this one in spots, too. But then, I loved sobbing my way through Casa Blanca. You sure never forgot that film.

I've read both The King's Daughter and The Comet, as well as some of Miriam's other stories. She's such a versatile writer. Congrats on the pending print release of TKD, Miriam, and best wishes for continued success with all your writing.

Hi Miriam,
I loved the excerpt! It sounds really interesting. I'll have to check it out. Thank you for stopping by and visiting with us!!

Thank you, Pat and Karilyn. This has been a pleasure being with everybody at Plotting Princesses. Love the name!