Get to Know: Kate Willoughby & All In

Thanks so much for inviting me to visit the Plotting Princesses. It's always exciting to visit other places, even in cyberspace. Today, I'm really thrilled to announce that Ellora's Cave will be allowing the first book in my Be-Wished series, All In, to be downloaded free through March 18. My hope is that people will have such a great time reading about Mariah and Tucker that they'll want to read the whole series. That's the evil plan, at least. LOL Usually, I hold a drawing for a free copy of one of my books, but today there's no need. Everyone can get their own free copy! 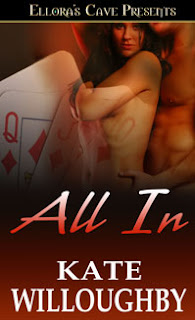 How did you get from your day job to writing romance?  I mentioned to my sister-in-law when I first met her that someday I wanted to be a published author. She introduced me to Romance Writers of America, and the rest is history! It took me 5 years of serious intent and writing, but I did it. Now I’m not sure I can ever stop.
What are your three favorite books of all time? That’s impossible for a booklover to answer! Narrowing it down to three…A Knight to Remember by Jude Deveraux made me cry, twice, even though I HATED the heroine at first! Name of the Wind by Patrick Rothfuss is epic, astounding fantasy at its very best. Rejar by Dara Joy is one of a series that I don’t think she ever finished and that’s a damn shame.
Morning, afternoon, or evening person?  Morning, and that’s a good thing, because my day job is as a barista at Starbucks, and I often have to report at 4:15 am. At least there’s coffee readily available when I get there!
Music--with or without? What kind? When I listen to music while writing, it’s usually instrumental. I can’t listen to lyrics, or I start paying attention to the words! Obviously, I suck at multi-tasking. LOL The one exception is opera, because that’s usually in a foreign language!
First or third POV? I like reading both. I’ve only been published in third, but am not opposed to writing something in first sometime. First person is cool because you really get into the character, but on the other hand, it’s trickier to plot because you never venture out of that narrating character’s head.
How's tricks? Do you juggle multiple projects?  Not well. Did I mention I suck at multi-tasking? LOL My muse is not the most cooperative on the planet. I fear and obey her, so when she only wants to work on one project at a time, I don’t argue.
What's harder: beginning, middle, or the end?  I find the middle to be the hardest to write. I’m a pantser, so sometimes I get to the middle and have to figure out what the heck is supposed to happen. Sometimes I go down the wrong path and have to backtrack, but it all ends up right when I get to the last page.
Revisions: Love 'em or hate 'em? I love revisions. I look forward to what my editor’s take on it and what she’s going to suggest to make it fantastic.
How did you come up with that title? Tucker, the hero of All In, is a professional poker player and I played (ha! Get it? Played??? LOL) around with a lot of different titles that either tied in with the poker aspect or the fact that their reunion was due to a wish coming true…In the Cards, All or Nothing, Mariah's Wish, Wishing for Tucker, and the very, very bad A Wish and a Player. Okay, they can't all be gems!
Best advice anybody ever gave you? My parents: Always do your best.
What's your favorite dessert? That’s a toughie, too! I think the chocolate soufflé I had at Emeril Legasse’s restaurant in New Orleans was the best dessert I ever had. However, because I don’t often visit restaurants that offer chocolate soufflés, my grandmother’s peach pie a la mode.
Here's an excerpt from ALL IN:
Mariah knew Tucker was going to kiss her, wanted him to kiss her, and when he did, she responded as if she’d been in hibernation. Part of her thought, you’re being a sleaze, but most of her didn’t care. The Wish Fairy had come through and Mariah wasn’t going to squander this once-in-a-lifetime chance to fulfill a fantasy she’d been fostering for six long years. Hell no. She slid her arms around his hard body and kissed him back.
His mouth moved over hers and he made a low sound of enjoyment that seemed to reverberate inside her. As he threaded his fingers through her hair, cradling her head, she moaned too. Sensations swept through her. Tucker was here in the flesh, pushing his tongue into her mouth, crowding her against the wall. She wasn’t imagining the spicy smell of his cologne or his strong arms—
Ping.
They both stepped hurriedly apart as the elevator doors opened and a family of four entered. Mariah touched her lips as if she could brush away the evidence, but the parents and kids paid no attention to them. The doors closed again. Tucker coughed and looked at her questioningly, his finger pointing first to the lit lobby button and then to the one reading thirty-five. Mariah bit her lip.
Find Kate at:  http://kate-willoughby.blogspot.com/  Find All In (free from March 4-18 on Amazon at:  http://www.amazon.com/All-Be-Wished-Book-One-ebook/dp/B002W83DXE/ref=sr_1_1?s=books&ie=UTF8&qid=1330724701&sr=1-1
Posted by Vicki Batman, sassy writer at 6:00 AM

Sounds like a great read! And free at the moment! the only thing better would be that it came with chocolate!

Hi Kate. Welcome to the Plotting Princesses. Great interview. Sounds like a fun read. Wishing you much success.

Good morning, Kate. Welcome to the Plotting Princesses blog. We're thrilled to have you here today.

Congratulations on having Ellora's Cave release All In as a freebie! Here's hoping that brings you lots of new readers (I've already downloaded my copy and its on my Kindle waiting to be gobbled up!)

The excerpt is great, definitely leaves you wanting more. And I agree with Liese, the only thing better would be if it came with chocolate. LOL

Welcome to PP, Kate. Loved the excerpt and am on my way to download ALL IN.

And congrats on your release.

Nice to meet you Kate. I'm now heading off to get my free copy since I need to know whether they picked the lobby or floor 35. I'm rooting for 35 myself! LOL!

Hi, Kate! Did you tell the WW writers or shall I? Great to have you visiting us today.

Hi Kate, All In sounds like fun! And how great that it's a free read! Hope it brings you lots of sales of other books. Good luck, Marilyn Campbell

I learned to play poker at age eleven so you have my full attention with ALL IN!
Based on your interview I'm going right now to download the book. Thanks, Kate, for sharing the delicious scene.

I loved this peek at the first kiss in All In! Off to greedily download the first book :)

Fabulous interview, and I loved the excerpt - rushing now to download. Cheers hon!

Great interview, Kate! Looking forward to reading All In.

Wow! I am off to get the free version of All In because my computer with it on it died! Thank you book fairies and Ellora's Cave of course. Only I'll have to do it off the lap top tonight cuz they've blocked the site here at work. WT!?!?!?!?!? Great interview, Kate.

I'm really excited that my book is available to all the visitors at Plotting Princesses.

Did I tell the WWWriters about the freebie or that I was blogging here? You know, I can't remember! LOL

Sheila, I hope you're not disappointed that there's not really too much poker in it...

And the rest of you, I really hope you enjoy ALL IN. It's gotten three 5 Star reviews on Amazon in the past couple of days. Woot!

I downloaded All In. Since I love you Woman's World stories, I know I'll love this also. Great interview. See you in class.

What a yummy excerpt! Best of luck with your books! I wish you thousands and thousands of new readers!

The best of luck with the free read concept. I've heard it's a winner! All In, sounds great! "I'm in" for a read.

Hi, Kate. Lovely interview, and the book sounds great. Congratulations! And here's to much success.

Hi Kate,
Welcome to the Plotting Princesses! Great interview! Your story sounds like a great read. Good luck with your writing!!!

Hi Kate! *waves madly* I loved All In! Can't wait for the last book. Thanks Plotting Princesses for a great interview. :)

Your excerpt left me wanting more, so off I go to download. Thank you and Ellora's Cave!

I love that you're a pantser, like a number of us at 'Plotting' Princesses.

Congratulations on your release!

Your excerpt left me wanting more, so off I go to download. Thank you and Ellora's Cave!

I love that you're a pantser, like a number of us at 'Plotting' Princesses.

Congratulations on your release!

Love the cover of All In! The story sounds fabulous!

The excerpt got my attention!

Hi Kate! Thanks for coming by the Princesses. Great interview, too. Always nice to get to know the other EC authors. :)

Its nice to get to know a fellow EC author!
Cristal

Hi Kate. Truly enjoyed your excerpt. What a generous thing to do offering a free read and strategically well thought out. Loved your answers! We visited New Orleans and my two favorite places is Commander's Palace with the lovely souffle' and I think it is Michael's Seafood? Lovely stuffed mushrooms. Yum - thanks for making me hungry. LOL. You are one entertaining lady. Thanks for sharing yourself today.

Hi, Kate!
Love the excerpt. And free...woohoo! Looking forward to reading All In asap. :)