Michelle Miles: In Which I Talk About Vacations 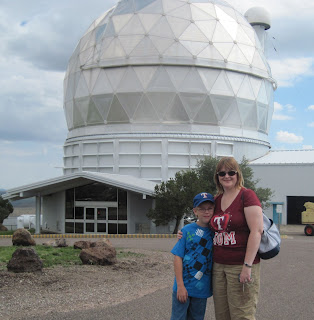 I have vacation on the brain. It’s short-timers-itis, I think. Where all I can think about is getting away from the office and doing something FUN. Ya know? Do you ever get like that?
Last summer, husband, kid and I traveled to West Texas and New Mexico. We had this grand idea to go to the Davis Mountains and Carlsbad Caverns. We were going to drive.
Now, if you’re not all that familiar with Texas let me tell you…it’s, um, big. We live in the Dallas/Fort Worth so heading west meant it would be about 10 hours before we got to the mountains. At the time, I was driving a 2006 Kia Spectra. Two days before we left for the trip, the air conditioner broke. I thought it might just need to be recharged but no such luck. And getting it fixed on the weekend before we left? Didn’t happen. No one could get in fixed in time.
I was mad.
I decided we were going anyway, dammit.

Of course last summer was almost as hot as the summer of 2011. We had a lot of 100+ days. And no rain. It was a long, hot, miserable drive. Husband started the trip and we agreed to take turns driving. By the time it was my turn to drive, we were all sweating and dying of the heat. But we persevered. We made it to the Davis Mountains and stopped for ice cream and a cold drink. When we got back in the car, with the sun blistering and no AC, I pulled out of the parking lot (which was gravel by the way) and blurted, “My eyeballs are hot!”
My husband cracked up. We say that a lot now whenever we’re feeling twitchy about the heat.

We made it to the hotel to blessed AC. By that time, though, I don’t think any amount of cool air would make us feel better. Once you’re hot like that…it’s hard to get cooled off. But we had a great time at McDonald Observatory and Carlsbad Caverns. Of the caverns, my son said it was the “most extraordinary place” he’d ever been. :D He’s right, too. It’s a pretty cool place. And it was 52 degrees in there. We actually wore jackets. I never wanted to leave.
The day we headed back home it was supposed to be 102 for the high. Which means it really feels like 120. We opted for driving home starting at sundown and into the wee hours. It was a trip we will always remember and laugh about even if at the time I felt like I was going to burst into flame every 2.3 seconds.
I finally did get the AC fixed on that miserable car…and then traded it in.
What are some of your best vacation memories, either as an adult or a kid?
Posted by Michelle Miles at 3:00 AM

When I was a kid we went to Carlsbad Caverns and we watched the bats leave the cavern. I'll never forget that sight. All those birds coming out. Also when we toured the cavern, they turned out the lights and we were in the dark. I've never experienced dark like that before. It was a great place to visit. Doing it without A/C...not so much. Too freaking hot.

I've had some fantastic vacations, but your AC story reminded me of when I was a kid. I don't even know where we were, but it was hot and we had a flat on the station wagon. We got the spare on and pulled into a station to have the other tire fixed.

We're sitting there in the heat waiting and my dad looks up at this DQ sign next door. On the marquee it advertised banana splits were half price. He grins that sideways grin of his and says, "Dinner?" That ice cream was amazing.

Two words for you Michelle. Rental car!!! I've got short-timers-itis myself. We are taking our first vacation without children in literally about 6 years.... I'll be across the pond in 2 short weeks. Can't wait!

Kelly, I envy you! Have a wonderful time!

We saw the bats too. It was amazing but the general public sucked. They couldn't be still or quiet. And yeah. It was freaking hot!

As a kid, my family always took vacations, even if we spent time with family. One year, we drove from Dallas to LA and up the coast to San Francisco. We visited the Grand Canyon, stayed with cousins at a vineyard, looked at the bridge, went to Disneyland, Alcatraz--wow. And then there are the ones where you sit and relax. Happy vacation.

Wow! Glad you got there and back safely. What a trip!

One time when we lived in Minnesota my hubby decided we would go visit the Amish community near the border of Iowa. It was fascinating, but he didn't want to pay the fee for the tour. So we followed some woman in her buggy home. I'm sure she thought we were stalking her.

But he's real friendly, so he stopped at her farm to say hello. The kids and I were so embarrassed we stayed in the car. She was good natured about our intrusion and sold him some homemade maple syrup.

Ah, Michelle, that brought back some memories of my trip to Carlsbad Caverns.

Of course, I'm acguiring a lot of favorite vacations since we entering the year 2000. My cruises are all exciting and I get to experience such fun, unusual things That I never thought I would.

But my favorite is visiting Ireland. I felt like I was home there. I cried because I had to come home....Now that is identifying with a place!

We went to Carlsbad when I was a young woman, and also stayed to see the bats. Back then many women were wearing that obnoxious beehive hairdo. There was such a hairdo in front of us, and guess what! A bat flew right into it and got stuck. Lots of excitement for awhile. It made for a memorable bat sighting.

These are the most impressive blogs I have ever seen. You provide such important information in your article. This is my latest post on Click speed test. Please read the article Click Counter and have a good reading experience.

I have read a lot of blogs and articles but your information is so helpful to me. Your work is really appreciated. Continuing your work and sharing this kind of information will be greatly appreciated. Also, I have a blog related to The best spacebar counter
in which I have provided a lot of information. Check it out Spacebar Counter and let me know what you think.