Sylvia McDaniel asks: Is Love only for Virgins?

I’m hard at work finishing up my new Christmas novella. This one is a little different. I went back to my best-selling western series, The Burnett Brides that I had written years ago. The series, set in the old west, is about a mother who has three very stubborn sons who have not gotten married. She wants grandchildren, and they’re not even married. So she pulls some tricks and by the time the third son is married, the children wanted to return the favor of finding her true love. I never wrote that book until now.


Eugenia Burnett (be careful what names you choose in books because they stay around a long time) has sworn never to remarry. She doesn’t need a husband or want one. She’s a free spirit doing what she pleases and doesn’t need a man to boss her around. Yet she’s not given up her matchmaking ways either. Now she’s moved on to the people she knows, and she’s putting widows and widowers together. Until one widower, Wyatt Jones (think John Wayne meets Maureen O’Hara) lets her know in front of a crowded restaurant that he’s not interested in any of the women she keeps sending him except her. He wants to marry her.

I’ve had a lot of fun with this book. The story just seemed to write itself with me hanging on for the ride. I love it when books are this easy to write. But this book is special because it’s about an “Older” heroine.

As a writer, I get tired of writing virgins and also very young women. There’s nothing wrong with writing young heroines, but as a writer I want to explore other times in life. We’re not young forever and what happens when people find love at a different age. As a reader I long for older heroines who find love a second time.


Our population is aging. The baby boomers are retiring more and more each year. Don’t you think they’ll want to read older heroines? No, they probably can’t be kick-ass, though that would be a fun challenge to write, but why can’t they fall in love again? Middle-aged heroines who give love a second chance.


So this year, I’m putting out a Christmas novella that has Eugenia’s story. It could be a flop, but I’m hoping that enough baby boomers will enjoy reading her story and ask for more older heroines who find love.  I’m also hoping that readers who loved this series, will enjoy seeing Eugenia find love and her sons get their revenge. Look for the preorders to start sometime this month. The title is The Christmas Bride.


Would you read a book about a middle-aged heroine finding love again? I hope so. Leave a comment for a chance to win a free copy of the new book when it's released November 1. 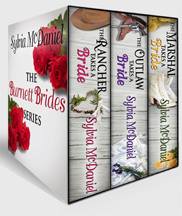 The Burnett Brides series is available on Amazon
Posted by Sylvia at 2:00 AM

Hi Sylvia! I would read about an older woman finding love. Love isn't just for the young. It's good to know you enjoyed writing this one. Can't wait to read. Ox

Thanks Vicki! I hope readers want to read about an older woman finding love.

I'm not a baby boomer, but I think your stories sound wonderful!

But someday you will be late fifties and would you want to find love again? Thanks Barb!

Yes, I definitely want an older heroine. I love grower older and I do not want to relive being young again. Andy Rooney did a piece on women over 40 and why they are better. It's an eye opener and very true.

I love the thought of an older heroine. Who says love is only for the young. I've got friends who didn't find their true loves into well later in life, and they're happy.

Love that you're doing a story about the three boys' mother. I can't wait to read it, it sounds terrific.

And personally, as an "older heroine" I say it's never too late to find love. :-)

I would love any heroine you wrote, no matter what age. But I emphatically agree with you that an older heroine, with some time and experience under her belt could be a whole lot of fun to write, AND read about!

Can't wait for this one!

She thank you for stopping by and I would have loved to have seen the piece on older women by Andy Rooney. He was such a funny guy.

Kathy,
I agree so much with what you said. I didn't know myself or what I wanted in life when I was younger. Hence one bad marriage. The second time around I knew exactly what I was looking for and though I really wasn't ready when I found it, we've been married almost nineteen years. Love later in life is very good.

Liz,
I have had so much fun writing this book. I really didn't get started on it until August 1 and I'm one chapter away from the end. Now comes the editing and rewrites. Then on the LV book.

Bantering of a Beautiful Mind said...

I CAN NOT WAIT for this story! I love the Burnett's!

Not only do I read book with older heroines, I write them. All of my heroines are at least in their 30s, with many in their 40s. I'm writing one now with hero/heroine in their 50s.

Actually I avoid stories with virgins, be they female or male. I'm not interested in anyone's "first time". I didn't "lose" my own virginity...I gave it away as soon as I found a volunteer because I was bored with it.

I want to read about people who have a past, who may have been wounded, and who still persevere to find true love.