Tales from the Crate: How to Write with a Puppy by Karilyn Bentley #crazydog 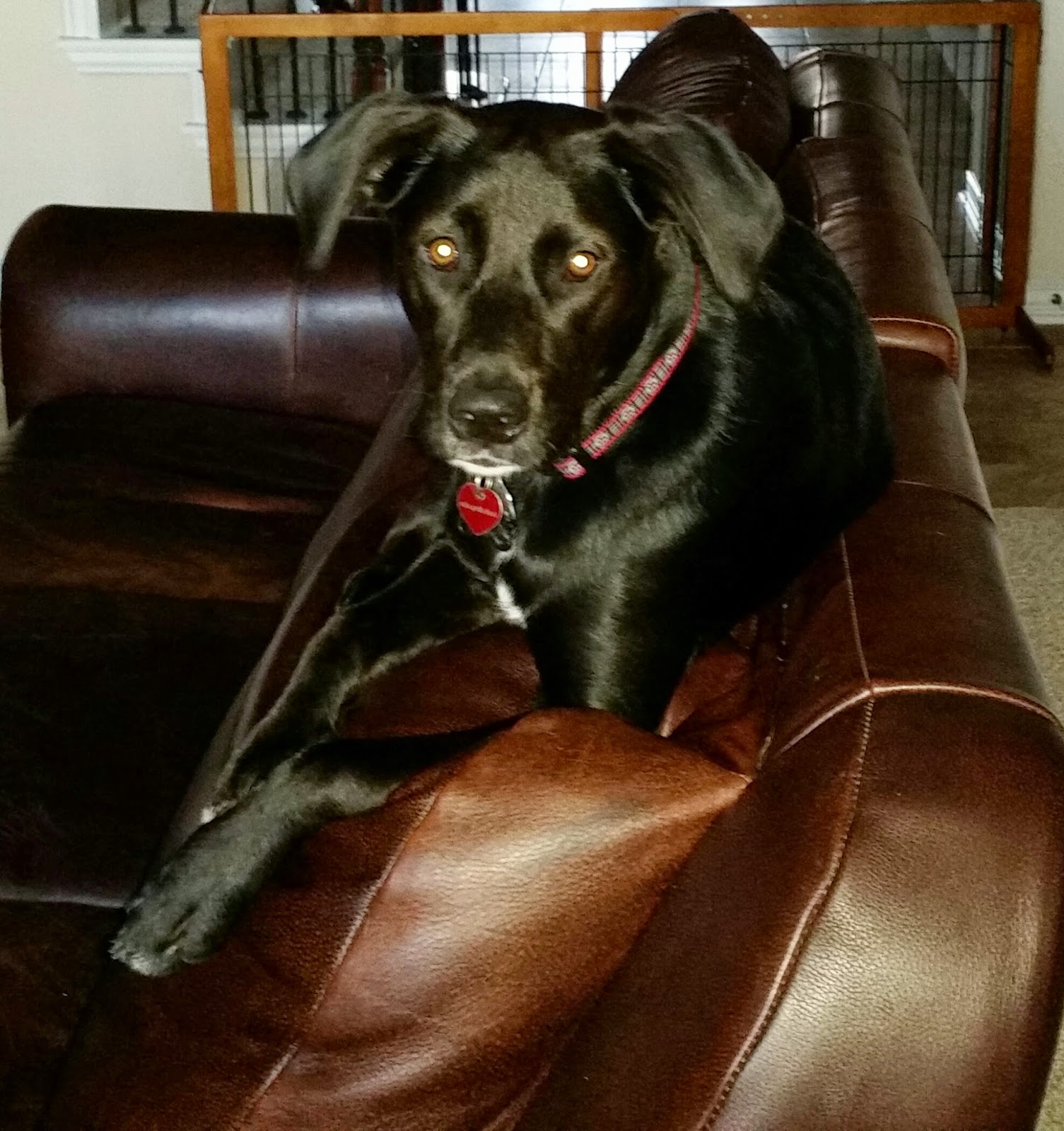 As some of you may remember, we got a puppy in June that we were told was seven months old. In July we found out she was really three months old when we got her. Yikes. I never thought to have that young of a puppy. Karma is getting me back for looking at others and thinking I could do a better job of raising a puppy than they were. Somewhere Karma is laughing its butt off.

So how do I write with a puppy? Well, this is what used to happen on my day off. I'd sleep in until The Hubster would wake me with a kiss as he was walking out the door. Then I'd determine whether the old gimpy dog, aka Hell Hound, was able to go for a walk. If so, walk him. If not, do Tai Chi and meditate. Feed dog. Have coffee and breakfast while reading paper. Take shower. Get in a couple of hours writing/promo before meeting Hubster for lunch. Come home, write some more. Greet Hubster with kiss and spend evening with him.

What happens now.
The Alarm Puppy goes off at 5:40AM and since it's my day off,  get up and haul her outside when she really wants to jump on Hubster and get pets. Put puppy back in crate, repeat night-night while she howls, waking Hubster. Pull covers over head and try to get another thirty minutes of sleep. Give up, get up, let puppy out of crate. Take gimpy Hell Hound and puppy for walk around block, return HH home and have arm pulled out of socket by puppy during a mile run. Kiss Hubster good-bye with promise to meet for lunch. Feed dogs.

Eat lunch. Complain about crazy puppy. Be assured there is no time warp. Return home. Sigh in relief that puppy is asleep in crate. Puppy hears sigh. Open crate, let out overly excited puppy. Commence pet-fest. Play ball-ball. Grab handful of food and try to teach puppy commands. Humor Hell Hound by teaching him commands too. When puppy tires of commands, play another round of ball-ball. Reattach arm.

Wonder why Hubster is home early. Realize it's not early. Place puppy in Hubster's arms and retreat to office. Write a paragraph and go investigate crash. Peel puppy off nightstand and carefully remove lampshade and TV remote from puppy's mouth. Chastise Hubster (a bit too) strongly. Bite back growl when he says he can't watch her at all times. Attach puppy to leash, attach leash to Hubster. Write another paragraph.

Get up to investigate clatter. See puppy yank leash off Hubster's arm, shove aside dog gate and run to office to be with me. Decide she's not so bad after all, but talk about a drain on productivity!

Anyway, that's my life with a puppy and why I've seemed rather frazzled later. On the plus side of life, the first book in my new urban fantasy series, Demon Lore, is up for pre-order now. It releases on 12/15. Squeeee!!! I'm really excited about it. I'll be back later in the month for more info on the book. Until then, happy reading!! And if you have any dog training suggestions or want to vent about your puppy/dog/cat, please do so in the comments.

Been there, done that with puppy. Still laughing with you, not at you. It gets better. In the meanwhile, congrats on your new release!!!

oh my ! - I am now very thankful that all my daughter recently brought home was a 5 week old kitty who thinks sleeping on my keyboard while I type is the best bed in the world.

I did however inherit a 3 month old puppy with a wicked tail from my son five years ago. I was saved from the walking experience by having a very large yard with doggy door access. But You have reinforced why when the time comes for new dogs I will continue to adopt full grown housebroken dogs!

Rescues make great pets. And no puppy terror! Though with my current German Shepherd Gunny I did briefly have a problem with him eating anything paper he found including my books -lol- but he eventually figured out his family fed him twice a day every day and he didn't need to scavenge for something to eat anymore

Still laughing and holding my sides. As a former dog trainer I can tell you puppy energy is like nothing else. I found deer antlers make great teething/occupied toys. Soak them in chicken broth so it absorbs in the marrow and it's a whole new wonderful treat. Also center cut femur bones ( the ones that are hollow in middle) are great and safe for them to chew on for hours. I basted mine with open pit BBQ sauce and baked for like 20 minutes to lock in the flavor. My dogs would sit and chew on them for hours. When the flavor wears off rebaste it and it's a new chew toy. When all else fails Benadryl works wonders.

I adopted a cat I thought was 3 years old but was actually 13 years old. She was not very rambunctious.:) I have never had a young puppy in the house so you have my sympathy. Would love to hear more about your new release in your next blog.

Hi, Karilyn! As you know, four years ago, we adopted two malti-poos. Getting up at 1 (brought back baby memories) was hard to potty them. The white one did great. To this day, the gray one is a pill.

I've been giving mine knuckles to chew. And cleans teeth!

LOL. I've done that more than once only we seldom used crates. One tiny pomeranean we had ate the inserts out of the only expensive pare of shoes I owned and I'd worn them maybe once. The same little 7 pound dog got so angry when we all went back to work after Christmas that she tossed every toy she had, and there were many, down the stairs and scattered them all over the house.

My craziest pet decision came when we'd been married about 6 months. We bought an American Eskimo puppy. He was just a huge white puff ball. Then a man at work brought me a white kitten to keep him company. Those two could destroy our house in nothing flat and they both insisted on sleeping with us. They'd wait until we were asleep then crawl stealthily onto the bed and angle for who could get between us first.

Thank you Katie! It is getting better. Slowly. Very, very slowly. She hasn't pulled any clothes out of the closet in a couple of weeks, which is a huge improvement. :)

Chris: We had always rescued grown dogs too. The puppy found us (she was also a rescue). Like yours, she was nuts over food at first. Once we realized she was younger than we thought, we got her younger puppy food and she stopped being so berserk at feeding time. :)

Karla: Glad I gave you a chuckle! :) Thank you for the suggestions!!! She has a couple of elk antlers and loves those. Knuckle bones are great too. I'll have to try soaking them in chicken broth, we haven't done that. If only I could get her to chew on those instead of anything soft with stuffing..... :)

Thank you Angelina! I bet your new cat wasn't very rambunctious! :) Stop back on 12/16 and I'll talk all about Demon Lore. :)

Vicki: Your doggies are adorable! So cute and friendly! Potty training is not fun no matter what their age. :( Knuckles are great! Puppy loves them!

Pamela: I love stories of how dogs express their feelings. I just don't like to clean up afterward! :) Animals are a lot of fun! Couldn't live without them!

That is why I currently don't have pets. You go girl. The puppy will grow up just like kids do. Thank goodness.

Oh my! At least he hasn't figured out the "I've got your new shoe, come and catch me!" game. I once chased my son's puppy all over the yard trying to retrieve mine--although it made no sense to try and get it back after he munched on it.

Laughing at your story (misery does love company!!) We got our Lola (malti-chon) when she was 10 weeks old. OMG!! She's now 2 and she's still as rambunctious as ever. And I still get up between 3-5 am every morning for that first poop!

CAn't wait for the release!!

Hi Liz! I've heard some dogs have a puppy phase until age 3. Yikes!!

Oh Karilyn, thanks for the laughter today! It brought back all those fond memories of our puppies.

Hilarious! Good thing you have re-attachable arms! Sounds like you're doing great. Someday puppy will mellow out. Just think how much you'll get done then!

Hilarious! Glad you have a re-attachable arm. But someday you're puppy will mellow. Just think how much you'll get done then!

Hi Mary G: I sure do hope she mellows out! And the sooner the better! :)

LOL!! Gosh, have I been there. Your puppy...is she a Lab by any chance? I discovered they're extremely high energy dogs...when I rescued a cute, sleepy little puppy mix from a shelter. My gosh. She's three now and I'm not sure how we survived that first year. She can literally jump straight up and look over the six foot back fence. She'd pull my arm out of my socket during walks, too.

Sooo funny. Thanks for the giggle (and the memories).

Loved reading this post! It totally cracked me up and reminded me of our puppy days. We were no more successful. But now, my 6 year old dog flops down on my feet when I write, which keeps them warm. She occasionally tries to prod my arm for more pets, but she's a gem. All that hard (and exhausting) work paid off!

Hi Joanne! You guessed it! She's a lab/border collie mix (or so we were told). She too was a sleepy little puppy when we picked her out. We have a lab/bloodhound mix who was crazy until about age 10.5. Hang in there!!! :)

Hi J.C.! Thank you for stopping by! Glad you got a chuckle! I'm glad to hear that things will get better. Sometimes I wonder. :)