Zeus - Father of Gods and Men

If you’re looking for a blog on mythology, you’ve come to the wrong place. Zeus, is our brand new puppy that we brought home on December 7th when he was eight weeks old. Our older dachshund is named Ashley. We now have A-Z weenie dogs.
When you get a new puppy, you should be careful what you name him. Puppies seem to take on the personality of their name. In mythology Zeus was considered “King of the Gods.” Our Zeus is just a puppy, but he now reigns supreme over our household. He has taken all of the older dogs toys, her bed, he has us jumping at all hours day or night and the common words in our house are “No Zeus. Stop Zeus.” 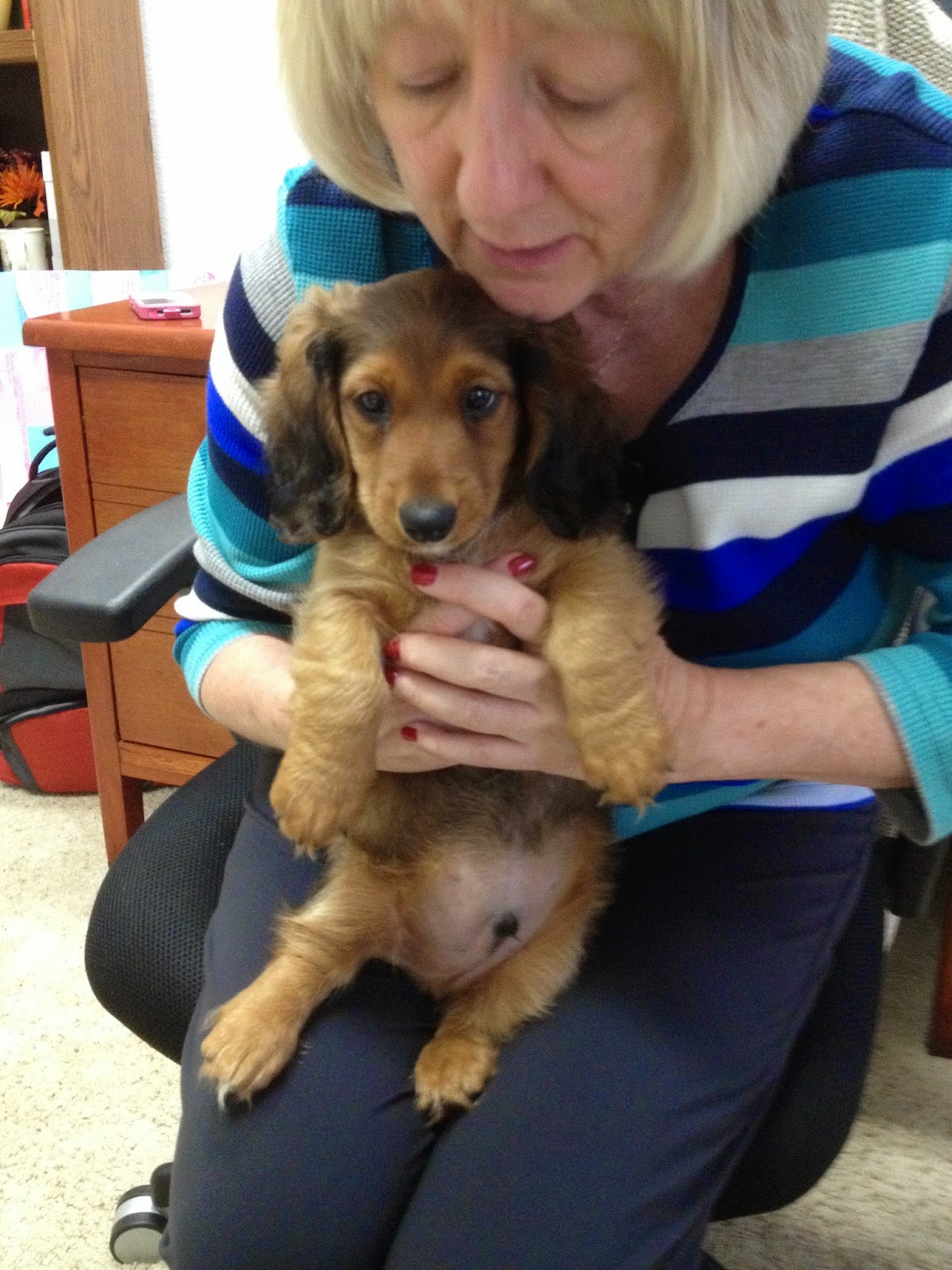 He’s part lover, part terror, part sweet baby. In fact, my son has renamed him Zeusifer – after Lucifer. At this stage of his life, everything goes into his mouth including fingers, toys, electrical cords, furniture, blankets, stuffing (don’t ask) leaves, sticks, grass. You name it and the puppy has tasted it. His teeth are like little razor blades and you don’t want any of your body parts in his mouth.
Our older dog has been very patient with him, but she’s growled at him several times when his teeth sank into her nose. And she has held him down a time or two to stop him from biting her. But recently I watched her playfully chasing him through the house, and sighed with happiness. She’d been lonely since our other dog passed ten months ago and it was so good to see her playing once again. 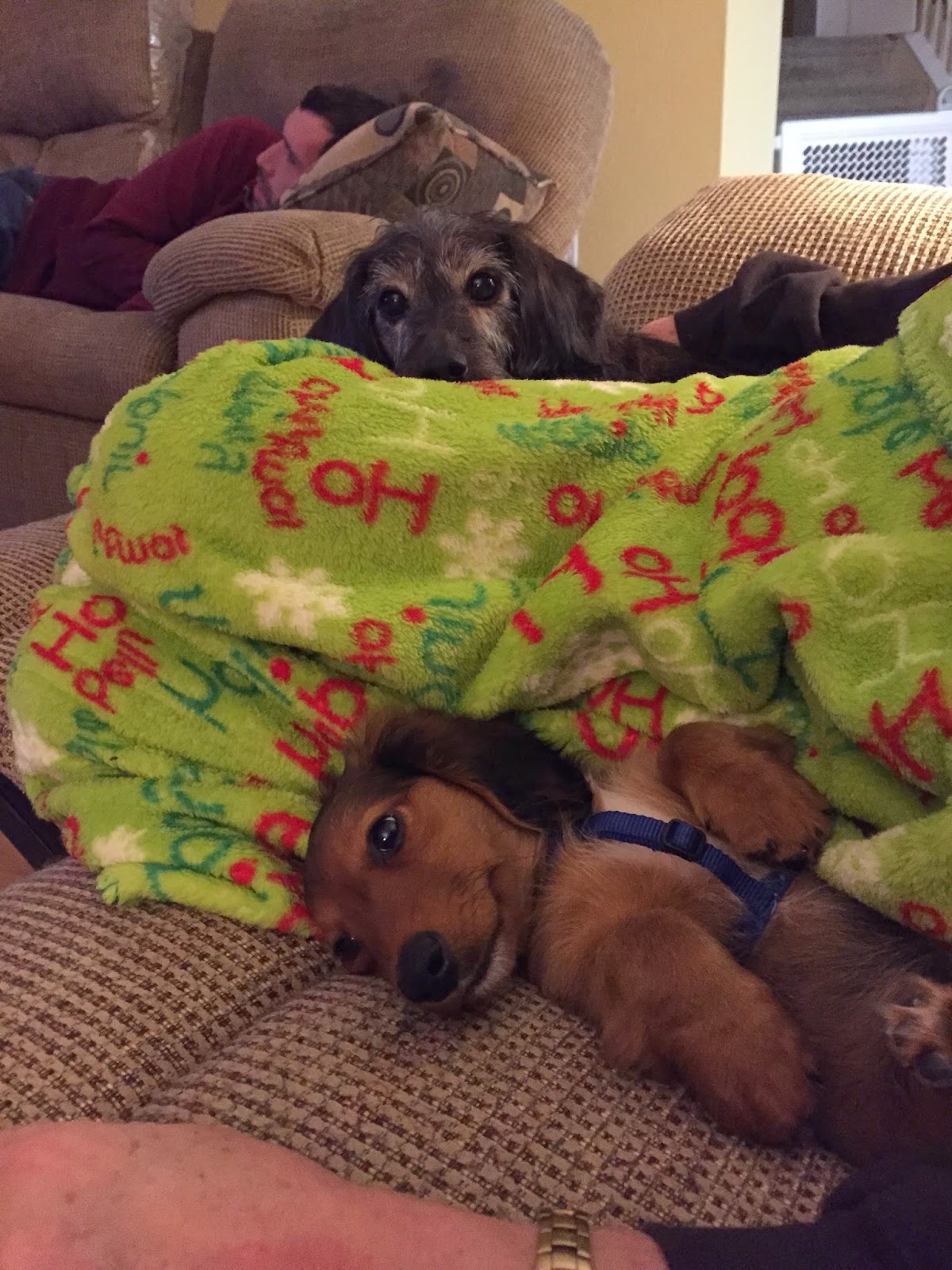 When we brought Zeus home, he was so quiet in the car that my husband told me later that he was worried he wouldn’t have any personality. As soon as this dog adjusted to his environment and knew he was wrapped around our hearts, the personality emerged.  And Oh My God! We are in so much trouble.
He plays full speed as hard as he can and then he finds you and whines until you pick him up. Once he is in your lap or your arms, he goes to sleep and nothing you do will wake him. He is out until his body recharges and then time to play again. 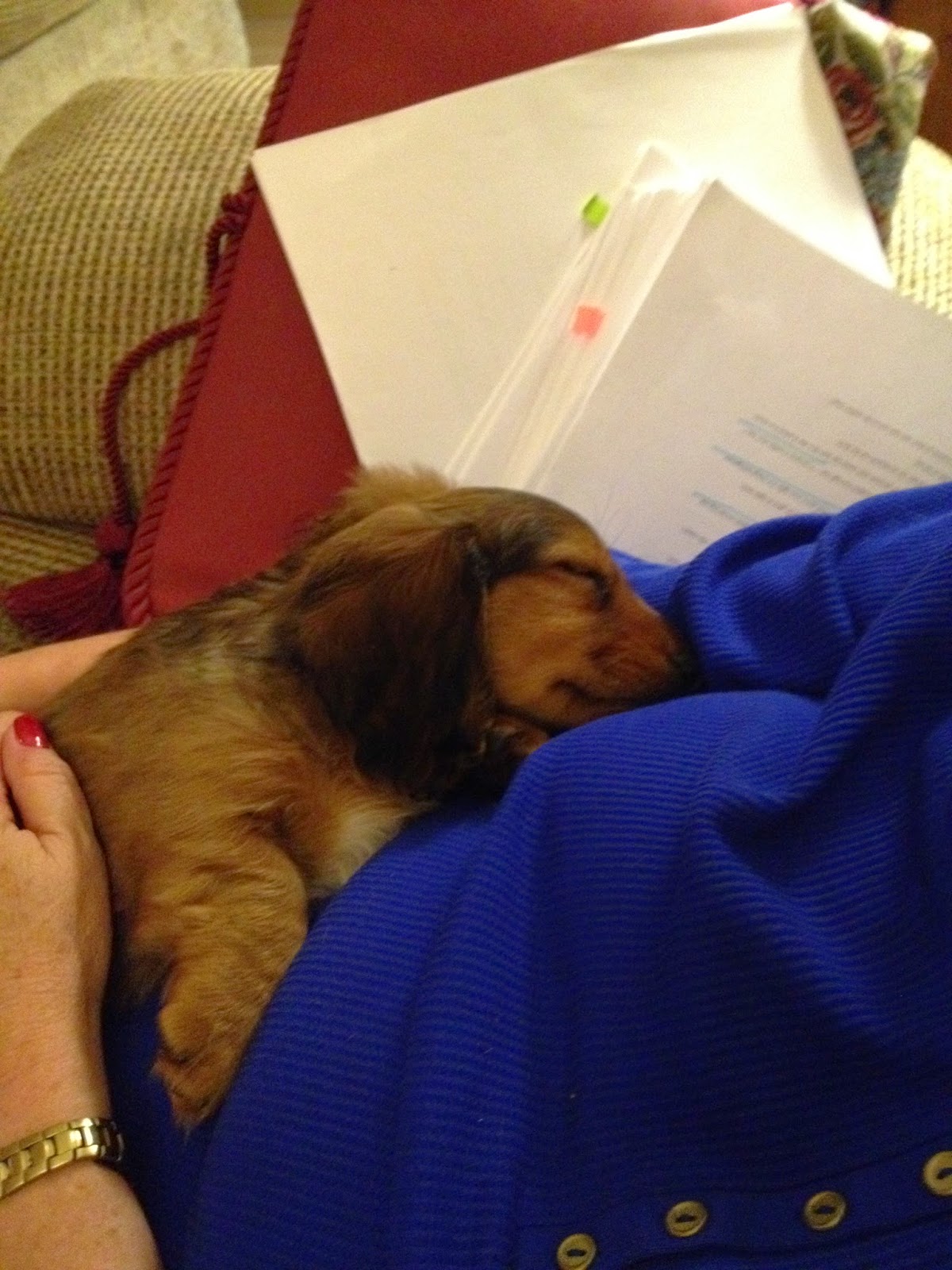 After our last Dachshund died I wasn’t certain I wanted another dog. Putz, who is in my novella Cupid’s Revenge, was the sweetest dog we’d ever owned and we were heartbroken when he died. We had him for fourteen wonderful years and I couldn’t bear the thought of another dog taking his place. And once you begin the journey with a pet, you know that at some point they will pass over the rainbow bridge and leave you behind grieving for them.
Zeus has roared into our life, giving us joy and love and making us laugh at his silly antics. He gazes at you with the sweetest face and you just want to squeeze him he’s so precious. And then he bites you.
Tell me about your Pet. Are you a dog or cat animal lover? What’s your pet’s name?

OMG, Sylvia, you have your hands full, but he is adorable!! One day soon, you'll look back and say, "remember???"

LOL Sylvia - you are a better woman than I - puppies are way too much work for me. My daughter has however added a kitten to our menagerie and watching her bolt from one end of the room to the other sprinting over any furniture in between can be hilarious.

Enjoy your puppy and tell him he's not allowed to bother mommy when she's writing :)

AWWWWH! Really, too adorable for words, what can one say except AWWWH!
cutest little snuggle pup ever.

Zeus is adorable!!!! I want to play with him and cuddle with him. But I don't think my cats will like that very much. Haha!

You are clearly a much more patient woman that I. :) While I LOVE dogs, and ADORE my ancient Aussie, I would never be able to put up with all that charming naughtiness in your puppy. Probably because I grew up in a household with working dogs who were raised out in the barn, and trained from the day they opened their eyes to be steady working and hunting companions. So I've never had a snuggly little lapdog, but you're making me rethink my ways. :)

Sylvia,
You make me laugh. I love your line 'And then he bites you...'. What a riot!

I have developed a cat family, who are feral and adopted me. They are getting to not be so 'feral'.

I'm usually a dog person, but after the last of my dog pets past in 2010, I made the choice to not own another one ( I can't handle the heartache when I lose them).

The cats are God'd pets for me to care for, so I keep them fed and a dry place from the weather.

Aww enjoy your new family member...Zeus i made the mistake of naming my Pitbull puppy Xena..she was a true fearless warrior puppy..always ready to attack a foot or toy with those needle teeth. One piece of advice is while Zeus is teething freeze his toys. Nylabones, deer antlers, or any other rubber toys. the cold numbs the teeth just like a kids teether and it helps soothe their chewing. Congrats again...i miss my furbabies.

Love the pix, Sylvia!!! What an adorable puppy! I'm with you on the chewing. Ours is now almost 10 months old and she still has a thing for stuffing. LOVES stuffing. Also loves to bring you a chew toy, ram it against your leg and chew. Ouch. It will get better. They do calm down.

Vicki,
Yes, he's already doubled in size. So cute and precious, but he's going to be a big dog for a dachshund.

Chris,
When he gets tired and is ready for a nap and I won't pay him any attention. He goes under my desk and starts to chew on the electrical cords of my computer. Not only am I afraid for his safety, but he clearly does this on purpose to get my attention.

Kat,
He is cute, but OMG what a handful.

Chris,
Love kitties, but my husband is allergic to them and we can't have one. But kitties are so cute.

Liz,
He is so cuddly, but then everything goes in his mouth. I love your Aussie dog, she's so so sweet. But she's a little big to be a lap dog.

Phyllis,
I completely understand about after losing a pet not to get another one. If he lives to be 14, I will be 72. Yes, I know hard to believe...I don't know if I will ever get another puppy. Maybe after Ashley is gone She's twelve, so he will need a companion at some point. But after that...I fear who will take care of them when I'm gone.

Thanks Angela! And thanks for stopping by the blog today.

Hi Karla,
I'll try that. I have two toys for him that look like baby teething toys. I'll put them in the freezer and see how he likes them.

Karilyn,
What is it about the stuffing that they love. The other night him and Ashley were sucking on a toy together, chewing it until they got the stuffing out She's twelve years old. She has sucked on toys since we got her as a puppy. I'm glad to hear that your puppy is settling down. The story of yours eating the door was hysterical, but I know costly.

Ladies,
Sorry it took me so long to get back to the blog. I'm at a writers retreat in a gorgeous home. Right now I'm sitting upstairs watching the sky lighten over Eagle Mountain Lake. Really pretty, but no sun yet and it's really cold.