About twice a year, I start getting itchy, twitchy, and b…er, witchy, and I know it’s time to get away from the city of concrete and back into nature.  I’m a country girl at heart, and I need the trees, mountains, lakes, oceans, and wildlife to keep me going.  There is such beauty on God’s earth, and so much that we still haven’t explored.  I once wrote a book for the Scrapbooking industry, and it’s all about reflecting on God’s wonders.  Alas, the publisher folded before it was published, but I pull it out every so often to reread it and remember how important it is to me to be in nature.

Last week my husband and I packed up the car, left notes for the kitty-sitters, and headed to Colorado for a week.  We drove straight through and reached Colorado Springs about six a.m.  We started our vacation with a lovely breakfast with my author friend Jennie Marts <waving at Jennie> and her husband.  We had a great time, and I’m so glad we had the time with them.

After stuffing ourselves with toffee pancakes (!!), we headed toward Mount Evans.  We followed the winding curves, stopping along the way to snap pictures of bighorn sheep, small lakes, and anything
that caught our eye.  If you’ve never been there, but plan to go, be warned of scary-narrow, winding roads that drop off into nothing except grass and rocks.  I think my heart was in my throat most of the way up…and back down.  We reached the top, but it was socked in with clouds and fog, snowing, very crowded, and I was dizzy from the altitude, so we stayed long enough to snap a picture to prove we had reached the top at 14,130 feet.

On the way back down, we spotted three mountain goats camped out among the rocks. One of them must be named Big Daddy, because he was HUGE.  One thing I haven’t mentioned before is that my husband and I much prefer vacations that take us back to nature. We don’t like big cities, crowds, or concrete, so we’ll take trees, rocks, and wildlife any day.  Oh, and food. We love finding unique local restaurants with really good food.

We drove further north to spend the night, then got up early the next morning to hunt for moose.  We have seen a few over the last several years, but not a male with a full rack, so we were on the prowl.  But they must have known we were coming, because they packed up the bears and hid from us.  Although we did see a fox!  Actually, he headed for my husband while I was in the bakery getting us breakfast, but I did see the tail end of him.

We stayed the week with my aunt in Grand Junction, then took a trip with her up to Salt Lake City.  If you’ve never driven through the desert of Utah, it’s almost like you’ve landed on another planet.  There’s a beauty in the starkness of the rocks and mountains. In Salt Lake City, we took a tour of led by two of the Mormon Sisters, and I hadn’t realized how much my soul needed to be recharged, but talking with these two young ladies about their faith really gave me some peace.

The next day we took the long way back to Grand Junction, and drove through some incredible areas filled with the yellows and oranges of aspens.  They were so incredible, almost like bouquets of yellow flowers – I just wanted to gather them up and bury my face in the colors.  One of the 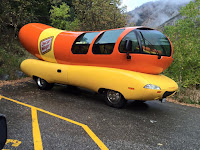 highlights of that drive was spotting the Oscar Meyer Wiener-Mobile tucked away in the mountains!  Toward the end of the drive, we also spotted a cowboy rounding up calves on a remote hillside.  I snapped pictures as fast as I could…uh, it’s research, people!  I’m working on a ranching romance!  Honest!

We spent a couple of days with my aunt and cousins, and had a great time with them.  I learned so much about my family history from my aunt, who is a whiz at genealogy.  I knew I came from German and English blood, but found out I’m also Scottish, Irish, and Quaker!  It was great spending time with some of the family I don’t get to see very often. 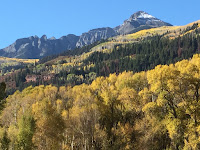 We packed up the car again on Friday and decided to take the long way home, and while my sittin’ bones are still somewhat tender, I’m so glad we did.  There are some incredible mountain vistas between Silverton and Durango, Colorado.  Just gorgeous.  This trip definitely recharged me until the next time we can get back to nature.  And I was finally able to get some writing done!  I needed to clear out the cobwebs and all the angst of daily life, and I put pen to paper...or fingers to keyboard!

Oh!  I found out while on vacation my book, Love Redesigned, is finally in print!

What about you? Where do you like to vacation?  Do you flock to the excitement of big cities, or trek back to nature?

Hi Sloane! Hi Vicki! My brother was a cross country truck driver and so was my Godson...and both said the Utah is the most beautiful state there is. I have been there twice..once when I was about 10 and we went to visit friends at the Army base (Dugway Proving Grounds) and then I was at the 4 corners several years ago.
Vacations are a bit tough for us right now as we are raising our 4 grand children and we honestly can't afford to go on one. I am hoping to go 'home' to Pennsylvania next summer, but I need to find someone that can accommodate 6 of us! Staying at a hotel would be quite expensive because we would need a suite or 2 rooms!
Your vacation sounds like heaven to me! I have a niece that lives in Ft. Collins I would love to visit. Before we had the 4 kids, we used to take awesome trips all over the country. Once, we left here (DFW area) and headed north, then west. We spent the first night in Gallup New Mexico then went on to the 4 corners the next morning. We drove through Colorado (I loved Durango!) and spent the second night in Ft. Collins. The next day we drove through Wyoming and into the Black Hills of South Dakota, where we spent the most time in one place, lol! We drove totally through Nebraska, looking for a hotel for the night, not finding any with a vacancy! We spent that night in Kansas, then drove back through Oklahoma and back to Texas! We did that with our 2 boys, who were 12 & 16 at the time. It was a great trip for me! I would love to do that again WITHOUT kids, LOL!
When we lived in PA we would go to Myrtle Beach South Carolina every summer for vacation. And before that my family would go to either Ocean City MD or the Outer Banks in North Carolina.

Wow, all that driving! Sounds like the vacations my husband and I take!
We haven't been to North or South Dakota yet, but it's on our list.
Utah really is beautiful - we had done most of the national parks a few years ago, but hadn't been to Salt Lake or Park City yet, so I'm glad we were able to go this time.
We drove through PA a few years ago - I loved it! Drove through Amish country, spent the night in Pittsburgh and toured several things the next day. That was our New England vacation, and where I fell in love with the Northeast.
So glad you stopped by to read about our trip!
Sloane

can't believe you counted them all! That's a part of the country I haven't visited yet, but I'm planning on doing more roadtripping in the future

Did you REALLY count all those cows and horses or did you pull numbers out of a hat?
I am glad you enjoyed my home state!

Loved the pictures and the fact that you counted the animals! HA! Several years ago, right outside Durango, the highway came to a halt and we sat in our car and watched about twenty cowboys and cowgirls herding cattle down the side of the road. The highway patrol had both sides of the highway closed as they herded the cattle across and to the other side. One of the cowgirls had to be at least 70 years old, but she was right there doing her part, keeping those cattle in the bar ditch. It was such an interesting sight and of course a couple of the cows wanted to check out the cars. We had one go right in front of us, but there was a cowboy right behind him pushing him off the highway. I took tons of pictures because like you said, it's research.