In “The Adventure of the Blue Carbuncle,” a Christmas goose leads Holmes and Watson on a merry chase from one vendor to another to apprehend the stone’s thief and determine how the Countess of Morcar’s blue carbuncle wound up in the bird’s crop in the first place. (1) 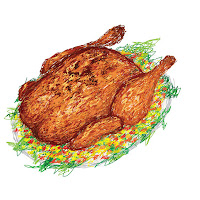 The American public might be surprised to know that while a goose served as the Christmas bird in this story, many Victorians chose to feast on turkey instead. The American bird joined the Christmas tree and crackers to become part of British holiday celebrations during the 1800s. Although the turkey was imported into the country beginning in the 1500s, the Victorians introduced it as a replacement for the traditional goose. (2)

As the turkey and goose battled it out to make it to the Christmas dinner table, many other Christmas traditions practiced today were first popularized during the Victorian period. Most prominent among these practices include the Christmas tree, cards, and crackers. The tree became fashionable after Prince Albert brought the custom from Germany and the Illustrated London News included an image of the royal family gathered around one in 1848. Within a few short years, most families had their own. Family members also picked up the practice of creating and sending cards to one another. The original Christmas card was commissioned in 1843 and cost a shilling a piece (a fortune in those times), but modern industrial printing and a drop in postage rates made the convention accessible to most of the population. By the 1880s, more than 11 million cards were sent each year. Also in 1848, a British confectioner introduced the Christmas cracker—a package of twisted paper that popped when opened. The original candy contents, however, were replaced with paper hats and small gifts as the century passed.

Speaking of gifts, the practice of exchanging presents moved from the New Year at the beginning of the century to Christmas as Victorians more widely observed the holiday. The small traditional gifts of fruits, nuts, or homemade items, however, were replaced with larger, purchased articles over time. (3) 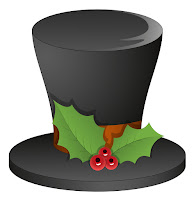 Perhaps more important than the outward trappings of the season was the shift in the overall view of Christmas that occurred in the mid-1840s, coinciding with the publication of Dickens’ A Christmas Carol. At the beginning of the 1800s, the day was not even recognized as a holiday by many businesses. Dickens’ tale is credited with spearheading the change from the somber 18th century Puritan observance to earlier practices of merriment and joy during the Yuletide season. (4) The concept of the “Christmas spirit” popularized by Dickens is possibly behind Holmes’ own belief that the thief of the blue carbuncle had learned his lesson, and in the “season of forgiveness,” sends him on his way, a free man.

Liese Sherwood-Fabre is currently working on a series of books involving Sherlock Holmes at age 13. As part of this process, she has written penned a number of essays on The Life and Times of Sherlock Holmes. You can check out the collection, available as a free download, on her Website. While there, also check out a free short story and her writing tips.

Hi, Liese! And thank you for sharing these Victorian tidbits. You know, I've never had goose. And I didn't have crackers until I was an adult. But Christmas and all the holidays are tons of fun.

Wow, Liese, I loved reading all about Christmas traditions from the bygone era, and learning some things I didn't know. It's so interesting to see how the traditions have changed over the years and evolved into what we celebrate today.

Thanks for a very insightful blog post. Happy Holidays to you!

Happy holidays to you, too, Vicki and Kathy!

I've been trying to remember if I ever had goose, or duck for that matter. My brother hunts and smokes a lot of things. I may have had goose at some point. I had no idea that turkeys had been in England for as long as they had. And funny to think of them as expensive!

Love how much I learn when we chat Sherlock and Victorian era ! I know I've had duck in the past- usually l'orange :) Never goose. But I do know that I'm not fond of anything british and pudding LOL.

Interesting to learn about traditions in other countries, especially that the Brits imported turkey from across the pond

Fascinating blog post Liese! I loved finding out that they ate turkey, too. J