What if you were a Living Accident? #TrueStory #MustRead #TexasTale

I had the pleasure of editing this wild tale! Check it out! It's now available at Kindle for only .99! ~ Princess Alisha 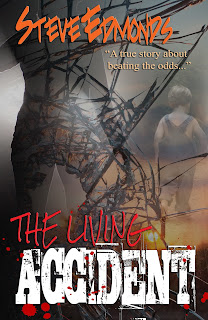 Book Description: The Living Accident is the true life story of Steve Edmonds who beat the odds time and time again. Beating death over and over is a theme for this wild man's life. So much so that he ends up working at a funeral home. Buckle your seat belt and get ready to ride the waves of gut busting hysteria in this coming of age autobiography about a good ole boy who just won't die but helps others who do.

Excerpt:
I guess I was what I have heard folks call being all boy throughout your childhood. I went through my period of killing birds with my BB gun. My dad’s sister, Aunt Bertha and her husband, Uncle George owned a couple of rent houses a couple houses down from us and they spent most weekends there fixing it up over a period of time.
Uncle George was what they call a goosy person. If you snuck up on him and poked him in the side he would punch the nearest person to him, or even if there was just a sudden loud noise near him he would punch anyone who was near.
They just happened to be there on this day while I was up the street with my BB gun searching for prey in this wooded area behind a neighbor’s house. It was getting dark and I looked up in this tree and saw a young owl.
I had never seen one before. My BB gun wasn’t very powerful. It was the kind that was lever action and you could just cock it once. The owl was about ten feet up and I took aim and shot it. He never even jumped. I cocked it again and shot once more. He still never moved.
It was nearly dark by now. I heard a strange noise and it was getting louder by the second. All of the sudden this huge owl landed on the limb right beside the baby.
It was huge, appearing to be at least three feet tall and over a foot wide. When it landed, the limb dropped way down and raised back up. I was scared to death. I began to ease backwards ever so slowly and felt my foot slide up against something, thinking it was probably a tree, I turned towards it.
At the same moment I saw it, it began flogging me. It was another owl and it appeared even bigger. I dropped my BB gun and started running. I could hear something rustling behind my heels and could feel a breeze over my head.
I just knew that I couldn’t make it home without being attacked again, so instead, I headed for my aunt and uncle’s house. As I ran up the drive I could see their wooden door was open but the screen door wasn’t.
I hit that porch running full blast, grabbed the door handle and flung the screen door open so hard that it slammed against the side of the house.
As I ran into the kitchen I saw Uncle George right in my path. My next thought was to duck. As I ran right past, he took a swing at me while simultaneously screaming at the top of his lungs. He said, “Here!”
I just fell out in the floor. I looked back and he had grabbed a knife and was braced as though someone was fixing to be coming right behind me. My Aunt said, “Who you are running from?”
“Owls!”
“What?” she asked.
“Owls!”
After quickly explaining what had happened, they laughed and agreed that it should teach me a lesson. I guarantee you; I learned a hard lesson from that experience. I stopped killing anything after that.
After I was there for a while they told me to head home. I told them I was too scared to go out. Uncle George stepped out and came back in and said there isn’t anything out here.
I still wasn’t convinced. My aunt finally called Momma and told her what had happened and she said Momma told her to tell me to get home right now. I told her to tell Momma to have the front door open.
I stepped out and ran as hard as I could, straight for the house. I know I heard them coming after me as I ran home. When I hit that door and Momma saw my face she laughed like crazy. She said, “I bet you won’t be shooting anything else, will you?”
“No, ma’am,” I said.
The next day I wouldn’t even go outside and everybody sure enjoyed watching me sweat.
I don’t think I went out that whole day but the next day was Monday and I had to go to school. I decided to sneak outside and test the waters on my own without having everyone laugh at me.
I opened the door and eased out as quietly as possible. I walked onto the driveway and heard something. As I turned towards the sound I looked up and there was a huge owl bearing right down on me. It hit me right in the back and top of my head as I screamed bloody murder while running up the steps into the house.
My momma came running into the kitchen. “The owl attacked me!” I screeched.
She doubled over from laughter. I wouldn’t doubt it if she wet her pants too. She tried her best to calm me.
“I’m not going outside!”
“You have to go to school!” she hollered back.
She finally went outside to check for killer owls and found no insane birds so she opened the car door for me. “Come on,” she ordered.
I jumped off the porch and the owl swooped down from the tree, heading straight for my head.
“See! I wasn’t lying! I told you they were after me!”
She enjoyed a good laugh, seeing me get what I deserved. This went on for several days. I had to resort to trying to fool the killer owls by wearing disguises and hats. They weren’t fooled at all. Everyone enjoyed the show while I couldn’t go out without being dive bombed by one of them.
I guess the owls decided I had learned my lesson because the aerial attacks finally ceased. I assure you, my momma enjoyed the heck out of seeing me get my just desserts.

KINDLE BUY LINK
Posted by Alisha at 12:00 AM

Hi, Alisha! What a delightful true story. I can't imagine having a big owl attack me. I'd run fast too. Thank you for sharing.

College education is not all about maximizing post-college salaries. It is also about proessays.org education in the traditional sense. There are other, intangible and life-altering benefits to attending a good college. It may be difficult to quantify those benefits, but you can usually tell quite easily someone who has gone to college from someone who has not.