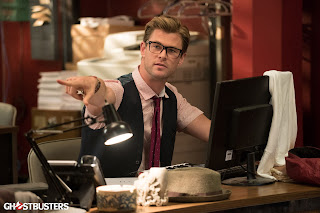 A weekend not so long ago, I visited my local library. I realized for the first time they had movies and music available for check-out. I was in heaven! Who KNEW? And why didn’t *I* know? And what’s really awesome is – it’s FREE! So the kid and I perused their selections we each found something to check-out.


One of them was Ghostbusters (1984). He asked if he could get it and I, of course, said SURE! I forgot how silly that movie is. It still makes me giggle. And there are tons of quotable lines throughout. Such as:

I looked into the trap, Ray.


(Later my BFF reminded that, back in the 80s, the Button Craze was going on and people had buttons that said, “Okay. So. She’s a dog.” That comment resurrected those brain cells that were long gone and it reminded me of the denim acid-wash jacket I had COVERED in them. No lie.)
We watched it twice. The kid thought it was so great I had to buy them both. And now there’s a reboot coming out starring Melissa McCarthy and Chris Hemsworth as the secretary. I can hardly wait to see how that turns out!
I got to thinking about the reboots and big budget sequels Hollywood is doing lately and did some digging. I had no idea there were so many movies that are going to be rebooted, not to mention sequels to some older movies. Star Wars: The Force Awakens seems to have done remarkably well plus we got to revisit some of our favorite characters. I understand there’s going to be a whole new franchise with the Star Wars movies thanks to the powerhouse Disney backing it (honestly, Rogue One looks AMAZING. See the trailer on YouTube HERE).  And there’s going to be a sequel to the 1982s Blade Runner with Harrison Ford reprising his role as Rick Deckard (is he or isn’t he a Replicant?).


Anyway, here are some other reboots tentatively coming between 2016 and 2020 according to IMDB.Com:
Okay I realize this list has more of a science fiction/fantasy slant. But I’m sure there are others we can imagine rebooting. What do you think? What movie would you like to see rebooted?


Michelle Miles is an avid movie watcher, writes romance, drinks coffee and loves SF/F. You can learn more about her books at http://www.michellemiles.net.
Posted by Michelle Miles at 4:00 AM

I Love your article. You cant visit my website : subway surfer new update