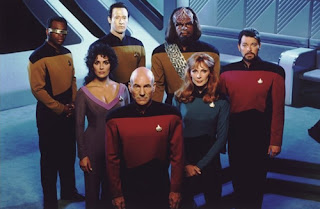 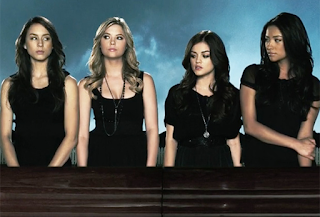 I've already decided my next quest will be to watch all 173 episodes of Star Trek: Deep Space Nine next. I guess my nerdom is really showing.

But I have a confession. Not only do I binge watch Star Trek, I've also gotten into Pretty Little Liars. This is my guilty pleasure. The husband pretends not to notice (even though I know he's ogling the girls) and I pretend not really like the show that it's merely for research purposes only.

My binge-watching isn't just limited to Netflix. I have all the streaming TV I can dream of at my fingertips thanks to the Roku. I also have Amazon Prime and have been catching up on Downton Abby. I've been watching it as fast as I can and only have one season left. Another show I'll be sad when I reach the end.

And when I get bored with all that, there's always baseball. We tend to watch a lot of Rangers during the summer (and a lot of Dallas Stars in the winter).

So what is your guilty pleasure you like to binge watch? Inquiring minds want to know!

Michelle Miles writes fantasy and paranormal romance. Find her on the web at http://www.michellemiles.net.
Posted by Michelle Miles at 4:00 AM

I'm exactly where you are on Downton Abbey, and I'm purposely slowing down because I will be so sad when there are no more to watch!!!

I don't get much TV time, but I will binge watch Discovery ID, any show, it doesn't matter! I have gotten into Podcasts and have been known to binge listen! I put on my head phones and go for a walk...or clean. I am a true crime buff, so those are the ones I listen to. I got sucked into the Serial craze, binge listened to season 1 and then was dying for more. I found Undisclosed which I binge listened to, getting caught up date, I needed another to fill in the week in between, so I found what was then Serial Dynasty, now Truth and Justice. The case covered in the first season of all of them is still on going...the (probably) wrongfully convicted is getting a new trial.I can't wait for that!
I watched Downton Abbey when it was on and it was one of my very favorite shows! I have the first 2 seasons on DVD. I was so sad to see it end, but they did a good job with it.

Hi Kelly! I have really enjoyed Downton! I'm not sure why I didn't watch it when it was current but I will be very sad when it's over. I guess that's why I've focused my TV bingeing on ST. LOL

Hi Cathy! Thanks for stopping by. I never thought about binge listening! LOL

Hi, Michelle! Sigh over Downton Abbey. I need to show off more clothing photos because the exhibit was freakin awesome. I'm stuck on American Ninja Warrior. America's Got Talent (Tape Face is my fav), all kinds of car shows on Velocity, Everything HGTV, old movies, mystery on PBS. Longmire. Just saw where Lady Mary has signed onto a new show. Mmmm

I am trying so hard to stay away from watching too much TV. Plus, I don't want to watch campaign commercials or even regular commercials, so I DVR all the shoes I love to watch. Vicki, we are watching American Ninja Warrior and loving it. Don watches all the car shows and I love reality TV. Yes, I'm a sucker for the Bachorlette, Bachelor Pad, Couples Therapy, Dating Naked and anything that is on HGTV. Like I said, we DVR everything so we can zip right on through the commercials. There was a crime show that I loved on Netflix - but Don didn't like it, so we stopped watching it. Watching too much TV eats right into my writing time. Speaking of...I haven't gotten started this morning and need to hop to it.

Well, I personally don't watch too much TV either. However, because I keep my granddaughters, I watch a lot of My Little Pony. And I'm totally up to date on Strawberry Shortcake and Kate and Mimmim. I'm sad they outgrew The Backyardigans. Ha.

Have a great day, everyone!

What is this American Nina Warrior? I have to check it out.

I only watch when my words are done for the day. That's my rule. :)

Like you, I have a rule that I can only watch when the words are done for the day. And that means, more often than not, that I have to go back to my laptop after dinner and write instead of sitting in front of the TV.
So I'm not much of a TV watcher, especially of all the wonderful BBC type historical drama—I get too into their world and it bleeds into my writing. But I recently went through all the available episodes of Grace & Frankie and really loved it.
Otherwise, I watch cycling for sports, and that's it.
I'd always rather be reading! ;)

I haven't watched TV for a long time because of the scheduled programs but recently when I heard about mobdro . I found it much more convenient to search for movies, music and news.

So happy to find good place to many here in the post, the writing is just great, thanks for the post.