My Great Hunter or Why Aren't the Squirrels Scurrying? #MFRWorg #Rssos #pets #dogs

I had no idea when Handsome adopted Champ and Jones, our malti-poos, that Jones would turn out to be such a huge hunter. 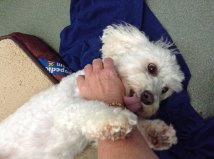 We’ve had the poos now for five years. And during this span, Jones has brought us squirrels. Yep, those fast critters are not fast enough for him. Jones loves to do run-run-run, a kind of lap thing, in the back yard. He is so fast when doing them, he even tilts aside.

Jones would be a good running buddy for someone. Sadly, I'm not a good runner.


Champ pitter patters. He’s smaller, more Maltese than Poodle. He has the short legs with a little bend in them. He likes to fetch “Squeaky,” an Army green flat cat. He leaps off furniture and scampers like a sheep. But not nearly as fast as Jones.

When I held yoga in the garage apartment, one lady came in late and asked if the dogs had a brown squeaky. My head went hmm because you never knew when they'd change from one to another and possibly, they had changed without me knowing. But upon returning to the house and passing their doggie bed, I saw the truth. A squirrel.


A month ago, Jones caught another squirrel. I had my hands in sudsy water and heard high-pitched squeals. Running outside, I saw this one still alive. I slid a newspaper plastic wrapper over my hand and up my arm, picked the creature up by his tail and set him in the grass beyond the breezeway gate and out of Jones’ reach. Instantly, the little guy flipped and crawled into the lantana.


This past week, Jones caught another, only I wasn’t there to rescue it. Then he caught two small ones. I went to the garage with garbage and saw him on his bed with the two, all laid out neatly, side by side. I dispatched them, thinking that’s what I’d heard squealing.


An hour later, another. Sigh.


With all the scurrying going on because it's fall, I almost dread going outside and finding more bodies. I’m sure there is a way to teach Jones not to catch animals. Any tips for helping me?

Pets are a lot of fun! Hattie Cooks loves cats, but can only have a beta in her apartment. Find out more at:
Amazon ebook    Amazon PB   TWRP ebook   TWRP PB   B&N   KOBO

Posted by Vicki Batman, sassy writer at 2:30 AM

Oh no. You are brave to take care of them. My cat loved to bring me presents, snakes, birds, moles...I had to get hubby to dispatch them. I don't know how to stop him from bringing you the presents. He must be very proud of how he keeps the yard safe!

It's funny how cute they are and yet, they are hunters too. Hugs!

Love this, Vicki! It's amazing the stuff dogs can get into, isn't it. Fortunately, all the ones I've had didn't bring me presents, though I did have Teddi catch birds and want to keep them in her mouth. It was a sight to see these poor birds wanting to fly away and she just wanted to play with them.

Great post! Makes me miss not having any dogs right now.

Your dog is feeling the instinct of his wolf ancestors (smile!).

Hi, Kathy! I'd never had dogs before Handsome and I married, just cats. The first dog, a sheepdog almost as big as me, wasn't too much fun. But these two are a hoot. Come get doodle love anytime!

Hi, Angela! Probably so. It's hard to imagine these two related to wolves. They're scamps. LOL

Loved the story Vicki! I had a dog once that did that, but I have no clue what to tell you. My dog aged out of it. :) Your dogs are adorable!