Michelle Miles: It's the Movies, Not Your House 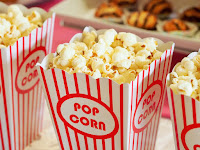 It's become a rare occurrence when the husband and I go to the movies. I take full responsibility for that because I detest the general public.

But we needed some fun this past weekend, so I requested a movie date. We saw Arrival with Amy Adams and Jeremey Renner. Really good flick. I recommend it!
Anyway, we purchased the tickets online and then picked them up at the kiosk at the theater. Things are getting so impersonal these days, you don't even have to talk to anyone to buy tickets. It's kind of sad, actually.

As we waited for the movie to start, the row began to fill up. To my right, an empty seat. To my left, the husband and on the other side of him was probably the rudest woman we'd encountered in a while. She sat down with her oversized cloth handbag, kicked off her shoes, put up her feet and then proceeded to move in. She even brought a pillow to stick under her knees as she wiggled her way to comfort. In her handbag, she'd smuggled in all kinds of contraband. I couldn't tell what, exactly, but the rustling of the bag was completely annoying through previews. About halfway through the movie, when her drink was nearly empty, she pulled off the lid and tossed it on the ground. And not in a way that wouldn't be noticed. She tossed it like a Frisbee.

I am pretty sure she wouldn't do this at her own home or even someone's that she had been invited to. If she was at my house, I wouldn't ask her to come again. I guess I don't understand why she thinks it's okay to leave her trash behind for someone else to pick up. Granted, they are usually high school kids who pick up the trash in theaters and that's their job, but is it okay to leave behind ALL your trash? My thought is no. My husband and I picked up our popcorn bucket, cups and bottles and took them with us when we left the theater. The trashcan was overflowing outside the door so rather than balance it on top, we found one that wasn't to deposit our trash.

I guess in my mind it's blatant disregard for fellow human beings. My husband was a Boy Scout, so you know their motto: leave it better than you found it. And we do. He's the only guy I know who practically buses the table when we're done eating at a restaurant.

I try not to let these things bother me but...they bother me. I know it's something I should probably just get over and ignore. But ignoring it still doesn't make it okay. I guess I just expect people to act better when they're in the general public. Maybe that's expecting too much.

Am I the only one that's experienced stuff like this?

Posted by Michelle Miles at 4:00 AM

You're definitely not alone in feeling like people have gotten completely irresponsible in their attitudes and seem to have no regard for common courtesy or decency anymore. It amazes me how people act in public. I would never, and I mean never, act in the way I see people behaving in public. I'll bet if somebody came into THEIR home and acted the way they do, they'd have a royal snit fit.

But a lot of people have become desensitized to common courtesy through social media, where that cloud of anonymity shrouds them. They have become inured to not only heir actions, but those around them to the point they don't even notice when they are being disrespectful. And it's a shame.

Hi Kathy -
I agree with you completely! I blame social media too. While it has its goods points, there are a lot of negatives I see from it. I guess this is, sadly, the world we live in now.

Oh Michelle, you are not alone! People make me so angry when I go out because of their rudeness and blatant disregard for others!I was appalled the other day when my very own daughter in law told her 6 year old that it was ok to be late, she had to look pretty!I said "Baby girl, you are beautiful, and it certainly IS important to be on time. People are waiting for you and it's rude to make them wait!" and I took her little hand and led her to the truck with my DIL running after us trying to fix one more thing! Seriously? The 8 year old was in a program at school and HAD to be there by 6:20. This is why she can't keep a job! This is why kids are growing up so rude and disrespectful! Sorry for the rant! LOL!

Hi Cathy -
Rant away! I agree with you. I'm a stickler for being on time. My husband makes fun of me for being 15-20 minutes early everywhere I go. I'd rather get there and wait than be late.