We are thrilled to have Suzanne Pearson as a guest Princess today on the blog! 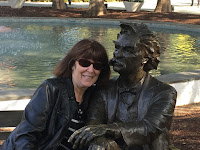 Suzanne Pearson was born in the Congo to missionary parents.  After graduating from high school, she and her family moved to Eugene Oregon, where she eventually met her husband.  She didn't start writing until she was an empty-nester, and had the idea to write about a missionary in the Congo who gets into all sorts of trouble.

Suzanne, get ready for your Plotting Princess speed round interview!  Ready? Set? GO!

One Line Blurb: Time is running out and someone is willing to kill to get what they want.

Excerpt from Love, Lies and Alibis:
Rocky tugged on the leash but she didn’t budge. “Sure, we’ll be fine.” Why had Luke asked her that? It made her suddenly feel as though she and Rocky were on an island, separate and vulnerable. She crossed her arms and moved closer to the tree.
What was she doing here anyway? Why had she agreed to this little excursion? This was all Luke’s fault. Who did he think he was to put this idea in her head? Adoption, babies? Dear God.
Most days it took everything she had just to get out of bed. If she adopted Rocky, she’d be responsible for his welfare.
The little bugger whined and tugged on his leash.
“Sorry, baby.” How long had she been daydreaming? She rubbed the gooseflesh that was suddenly popping out on her skin. The wind was starting to whip around her legs. Dark clouds hurried across the sky changing the mood of the day to something dark and oppressive.
Thunder boomed.
Her eyes darted toward the mall. Where was Luke?
Rocky yelped, straining at his leash.
“Don’t be afraid.” The makeshift dog park was quickly emptying as people scurried to their cars. “Luke will understand why we returned to the tent.” She bent down to pick Rocky up as fat raindrops found their way through the branches of the tree.
A twig broke away from the tree and bounced off Rocky’s shoulder. He shot one terror filled looked at Tiffany and raced away, ripping the leash out of her hands.
“Rocky, no!” she cried. But he was beyond hearing. Stepping out from the shelter of the trees, rain pelted her, drenching her clothes. Her bangs were plastered to her forehead but at least her hair was too short to obstruct her view as she searched for the runaway puppy.
Lightning flashed, and the scent of ozone hit her just as she saw a tiny dark body hurtling toward the cover of trees lined up like soldiers against the parking lot. Rocky slipped through a break in the trees and disappeared. She raced toward the spot slipping in the mud ringing the trees. Squatting down, she called his name.
Her heart pounded as she frantically pushed branches aside until something nudged her hands. Rocky? Please God, let it be Rocky.
Woof!
“Good boy, good boy,” she crooned. “Come here, baby.” She could see him now. He was covered in mud and shivering violently as his terror-filled eyes searched hers. He took one step toward her extended hands and then backed away from her even as he let loose with an ear-shattering volley of barking.
“Rocky, stop that. Come here.”
Something hot and heavy settled against her back. “Luke?” Even before she caught the faint whiff of stale tobacco she knew it wasn’t Luke. Rocky would not have backed away from him.
Her stomach knotted with fear. She forgot about Rocky as she struggled to break free. A branch slapped against her face and she cried out.
The assailant wrenched her arms back and dragged her across the grass. Her heart pounded and the blood roared in her ears. Her foot caught on a tree root, momentarily stopping her attacker, but with a violent yank, her sneaker popped off and her foot came free.
They were out in the open now, having left the trees behind. Struggling against her attacker, she frantically searched for someone who might see what was happening and come to her aid.
No one.
She was on her own.
Her mind flashed back to a self-defense video from high school and she tried to remember what to do. Make yourself dead weight? Smash her head back into his nose?
“Where are you taking me? What do you want?” Her screams disappeared in the howling wind.
“You’re going to get it for me.”
His lips pressed against her cheek, making her skin crawl. “Get what?” She tried dragging her feet to slow his progress but her toes barely touched the ground. His arms around her waist were cutting off her air supply. Short, quick breaths were all she could manage.
Woof, woof, woof.
Her captor faltered for one moment but then continued dragging her across the asphalt with Rocky nipping at their heels.
Dear God, I know we haven’t been spending time together and, of course, it’s my fault. But, this would be a great time to let me know you’re real. A miracle would be really cool!
A blinding flash of light stopped her would-be attacker in his tracks.
Wow, God. Thanks.
A horn blared. Tires screeched.
Oh! Oh no.
The assailant let loose a string of curses.
“Let me go!”
“Stop squirming.”
The car hit a pool of water, fishtailing toward them. It wasn’t going to stop. It kept coming and coming and coming.
She strained to break free from the Schwarzenegger-like arms holding her. Kicking back, she tried to connect with his knees, shins, anything that would make him loosen his grip.
She didn’t want to die, not when she’d just begun to live.
Luke, where are you?
One minute she was tiring of her struggles to break free, the next, she was flying through the air.
Straight into the path of the oncoming car.
Her head bounced off something unforgiving. Pain ricocheted through her elbow and she thought she heard a bone crack. Rocks, mud, and gravel tore through her jeans and shirt as her body slid across the ground.
And then it was over. She slammed into a rock-hard object. The air left her lungs and the smell of rubber burned her nose. Something warm trickled down the side of her face. Tiny hammers pounded against her skull.
Through it all, she knew she needed to move, to run, before her attacker found her but her legs were twisted and her brain was getting fuzzy. As the darkness overtook her, one last thought raced through her mind.
Run.

Congratulations Suzanne on the release of your new book. May you have many sales. Very interesting life you've led - born in the Congo. Wow!

I have a picture of myself as a baby in my crib with a snake curled on the floor right under the crib. That's probably where my fear of snakes began!

Great post, Suzanne! Congratulations on the publication of Love, Lies and Alibis!
Where did the inspiration for this book come from?

My time in the Congo was very difficult emotionally. I tried to put it in a box and bury it as deep as I could in my subconscious. However, when I started writing, it clamored for attention. My husband help me find a present day situation to incorporate the knowledge I had of Congo and missionary life. The story about the snake actually attacking the truck bumper happened to my dad. It was I believe a 17' green mamba which is one of the deadliest snakes in the world.

What made you decide to set "Love, Lies and Alibis" in Eugene, OR?
What can you tell us about the area?

Whenever my family returned to America, we would live in Eugene, OR, so I'm very familiar with that city. Thankfully, I have nothing in common with Tiffany, the heroine of Love, Lies & Alibis so I'm not sure how I came up with her character but I really enjoyed watching her wade through numerous difficulties to a place of healing.

This excerpt is awesome - love the tension! Congratulations on the release Suzanne! Here's to many many sales and fabulously glowing reviews! :)

Wow! What a way to get my heart moving this morning!

And what an intereting life you've had!

Best wishes on the book!

absolutely love that picture ! How fun - and welcome and thanks for stopping by !

Welcome to the Plotting Princesses blog, Suzanne! Loved the excerpt, this sounds like a book I definitely need to add to my Kindle. Congratulations on its release, and wishing you many sales.

What I like about Tiffany is that, even though she is a mess, she can see beyond her own problems to try and help Luke.

Wow, Suzanne, so nice to have you!! And a champagne sister too. Did I miss the cake? Happy book day and hugs!!

Welcome to the Plotting Princesses! You wear our guest tiara very well. I loved the excerpt. It makes me want read more! Congratulations on release of book #2!

Thanks ladies. It has been a pleasure being here and no, Vicki, you didn't miss any cake.

Thinking of tiaras reminds me of Amy on Big Bang. Does anyone know that episode? Okay, okay, I digress.

Welcome Suzanne! Wow, that was a great excerpt! Now I have to go find out what happened. Congrats on your release! Here's to many sales!

I'm mostly a cat person but having Rocky in this story really made me want to go out and adopt a puppy. He's a precious, sweet little guy.