Stilettos or flipflops: Barefoot
Coffee or tea: Tea
Ebook or paperback: Paperback
Pencil or pen: Pen
Favorite song: The Celts by Enya
Streak or not: Not
Favorite dessert: Anything dark chocolate
Champagne or gin: Champagne
Paranormal or Historical: Historical
Ginger or Mary Ann: Mary Ann
Favorite TV show: Beauty and the Beast (Ron Perlman and Linda Hamilton)
Hot or cold: Cold
POV: Optimistic
I'd die if I don't have: Caffeine 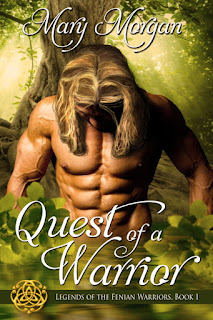 “You met them in the Order of the Dragon Knights, now journey to the realm of the Fae and witness their legends!"

Excerpt from QUEST OF A WARRIOR:

Putting a fist to her mouth to stifle the laughter, Ivy turned when the front door to the pub blew open. The cold blast of air lashed across her face, but she gave no care. Her mouth became dry as the man stood there blocking what little light remained in the sky. His silver-blond wavy hair whipped around his chiseled face shaded by a light beard. Yet, it was those eyes that bore into hers—holding her captive. Were they silver or ice blue? She blinked several times, and swallowed.

The giant stepped into the pub and closed the door. Ivy’s gaze traveled the length of him as he made his way past her to the bar. She couldn’t help but follow him with her eyes. He was sinfully dressed in all black—jeans, boots, leather jacket opened to reveal a black tee. He was magnificent.

The woman’s words snapped Ivy out of her lustful trance. She looked at her friend. “Vikings in Glennamore?”

Mac placed her coat over her shoulders and chuckled. “Do not fear they were banished many centuries ago. I’ll go see what the Viking wants. I’m sure he’s only passing through and needs a pint and some food. There’s nothing in Glennamore to raid.”

The room blurred, and Ivy brushed a hand over her brow. “Not a Viking,” she uttered softly.

Erin placed a hand on her arm. “Are you all right?”

Ivy lifted her head. The gorgeous man leaned against the bar as Mac made his way to him. “I said he’s not a Viking.”

Erin smirked. “You could have fooled me.”

The man straightened as Mac pointed a finger directly in Ivy’s direction.

Ivy was unable to move, the words tumbled free as if spoken by someone else. “He’s an ancient Celt.”

The stranger immediately glanced her way, shock registering across his face as if he had heard her spoken words.

“Good Lord, you’re as white as a sheet, Ivy Kathleen.”

She barely heard Erin’s words. The Celt moved toward her, a frown marring his handsome features. A tremor slithered down her spine as she lifted her head up to meet his gaze.

“Ivy O’Callaghan?” The soft burr of his voice brushed over her face, and she couldn’t determine if it was Irish or Scottish.

Her mouth stayed dry, making her unable to acknowledge the man’s question. Nodding slowly, she took a step back. Then the Celt smiled, and Ivy thought she would melt right there on the floor. How could anyone look that gorgeous?

Erin nudged her. “Forgive my friend, Ivy Kathleen, she seems to have lost her voice.”

Recovering her wits, Ivy replied, “Sorry. I’m done telling stories about my life in the States.”

The Celt arched a brow. “Not interested in your stories. Sean Casey sent me to inspect your repairs.”

Smiling, the man nodded. “Most of his life. I’m Conn MacRoich.”


Find QUEST OF A WARRIOR at: Amazon: https://www.amazon.com/Quest-Warrior-Legends-Fenian-Warriors-ebook/dp/B072HPBMDM/

Hi Mary! I loved this book! Actually your whole series. :) Good luck with your sale!!

Thanks so much for hosting me today! And thank you, Karilyn for loving my stories! Woot!

Great excerpt, Mary! All the best with this release and your others!

Mary, loving "Quest of a Warrior"! So glad you could be the guest Princess today!

I'm always short on time for reading but love a good time travel! Thanks for popping by !

I love Enya! Good luck with the book.

I appreciate writers who can create such otherworlds. This sounds amazing! Good luck.

Nice interview, Mary. I really enjoyed the speed round. All the best on your latest release.

Waving to all of you! Thanks for stopping by! And Allison, you have made my month!

Mary Hi! Dropped by to check out your Quest of a Warrior, but I already have and read it. Waiting for your new one. LOL Best of luck!

Great excerpt, Mary. And Enya is one of my favorites, too. I wish you much success!

Welcome to the Plotting Princesses blog! So happy to see you here today. Loved the excerpt, and love reading paranormal. I'm definitely going to be checking this book out, just from that excerpt alone.

Hi, Mary! So nice to have you visit with us and share about yourself and your book.

Mary is one of the most fantastic all around historical authors. She is a truly fabulous person and I am so honored to call her 'cherished friend'. She is just AWESOME!!!