DASHING ALL THE WAY: A Christmas Anthology

Good morning all! I hope you are all well into the swing of the holiday season (Hanukkah begins today!) and full of good cheer. To do my part for comfort and joy, I’ve got a short excerpt from my Christmas novella, “Up On the Rooftops, in DASHING ALL THE WAY: A Christmas Anthology with authors Celeste Bradley, Eva Devon, Heather Snow and myself! 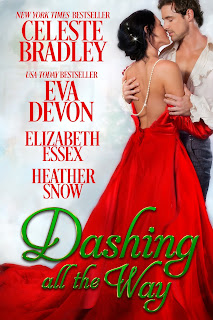 Now, my novella, “Up On the Rooftops” is set in London, 1811, features a very Scottish heroine the likes of which I’ve never before written—a widow!

Here they are, spark to each other’s tinder:

“ He kissed her the way a man kisses a woman he wants beyond distraction—with heat and perhaps a little anger. But he was angry—angry that she tempted him so. Angry that he couldn’t stop himself from wanting her just the same. Angry that she kissed him like he’d never been kissed before—as if she knew she was the most precious jewel he would ever hold in his hands.
But they were in too public a place. Anyone might come by—her mother, her step-brother Arthur, her step-father the viscount. “Come,” he whispered against her lips, and she came willingly, grasping the hand her offered her to lead her down a corridor to the first door that gave out into the courtyard, where the winter wind lashed against her bare arms.
Toby immediately turned back, determined to find someplace indoors.
“No.” Despite the cold, she was just as determined. “I think I know a spot.”
She led him at a run to the carriage house, which was well-lit on the alley side, with braziers put out to warm the gathered coachmen as they waited for their charges within the house.
But Caledonia Bowmont was as clever as she was beautiful, steering them toward the back of the carriage house, where the Meecham town coach was put up tight and snug. And best of all, dark and inviting.
She clambered in and immediately pulled out a thick, fur-lined rug. “This will keep us warm.”
“No,” he contradicted even as he wrapped the dark sable around her shoulders. “I’ll keep you warm.”
He drew her close to kiss her, so close she was almost in his lap. And then she was in his lap, with her arms wrapped tight around his shoulders, kissing him as if it were the rightest and best thing in the world. As if they had always meant to meet in a dark, velvet-lined carriage. As if he had always dreamed of kissing her wrapped in fur and delight.
She smelled of sweet orange blossom—sunshine in the dark of winter—and she tasted of wicked desire and sparkling champagne. Of brightness and light. Of happiness. Of possibility.
That was her allure—that was her danger.
Because she made him think of impossible things.
She made him hope.

What are you hoping for this holiday season? Me, I just want my family to be all together, and for my sprigs to be home safe and sound from college. :)

Let me know your hopes in the comments below to be eligible to #win an e-copy of “Up On the Rooftops,” along with the three other novellas in DASHING ALL THE WAY!

I know there will be great rejoicing when your family is together this Christmas. For 2018, I hope Handsome's recovery continues. 2017 was tough on us. Merry Christmas!

Merry Christmas to you nd yours as well, Vicki. May it be everything merry and bright!

The holidays raced toward me like a roaring train this year and I'm not ready! Merry Christmas! I'm wishing lots of wonderful thinks for us in 2018!

Congratulations on the Christmas book!

Thank you, Kathy! Wishing you and yours comfort and joy! And lots of book sales! <3

Nice book to read when everyone else is asleep,snug in their beds. Wishes for a wonderful Christmas to your friends and family.

Thank you, Margaret. I wrote it to be a lovely escape and I hope it is that. Wishing you all the best as well, this Christmastide!

And my winner is Margaret Murray-Evans! Please contact me at elizabeth@elizabethessex.com to receive your e-copy of DASHING ALL THE WAY! Wishing you all comfort & joy!