I’m going to use this space for my shameless self-promotion.

On Friday, December 1, the second book in my Age of Wizards series released. ON THE HUNT FOR THE WIZARD KING is out for public consumption. I’m so insanely excited about this book. It took me nearly a year to write because these books are long and complex. But I’m happy with the way it turned out and I think readers will enjoy Sunnie and Caleb’s story. 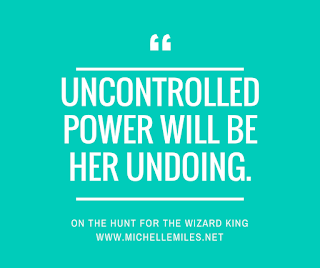 I sort of kicked myself for ending IN THE TOWER OF THE WIZARD KING on a cliffhanger. I’m sure a lot of readers hated that but I…couldn’t…help…myself.

The second book has a real ending. I promise. Most storylines are wrapped up nicely except for one or two lingering ones that will make you wonder what happened to these characters. I’ve been toying with an idea for a third book.

I’ve built this large world where there are wizards and faeries and even a few dragons. I think I’ve figured out a way to cross-over my Realm of Honor series with the Age of Wizards series with a cool new twist. 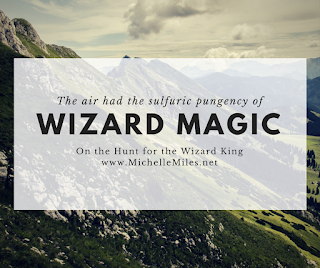 I have so many stories swirling around in my brain, it sometimes makes it hard for me to focus on what to do next. I want to do EVERYTHING next and that’s pretty much impossible. HA.

Anyway, here’s a little peek at the book. Buy links are at the bottom. 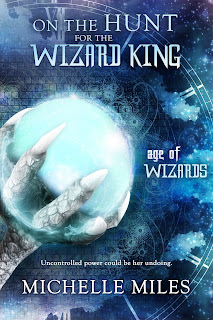 As they made their way down, she saw the shimmering thing in the water. She hadn’t noticed it earlier that day. Had it been there before and she missed it? She couldn’t quite make it out but she knew it was something that didn’t belong there.

“What is that?” She pointed to it.

Caleb beat her to the edge of the creek. She paused next to him and peered down at the long silver staff with the glowing orb nestled in what looked like a silver dragon’s claw. The water sparkled around it, giving it an ethereal glow.

“Stay away from it.” There was something urgent and commending in his voice.

Touch it. Take it. Pick up the staff, Sunnie.

The words whispered in her head, the voice a dark and forbidding presence urging her forward. As though something reached down into her inner psyche and compelled her to do as it commanded. She dropped to her knees at the edge of the creek.

“What are you doing, Sunnie?”

Though she knew Caleb was speaking, she ignored him because the pull from the staff overpowered her senses.

Embrace the magic. Take the staff.

She pinched the bridge of her nose between her thumb and forefinger. Was she hearing things? Or was the voice really there?

Become who you are meant to be, Sunnie.

That time she was certain she heard the words in her head. She glanced up at Caleb but he merely stood there, almost like he was frozen in time. Sunnie glanced back at the silver staff in the water and noticed something very strange about the ripples. It seemed almost as though they moved in slow motion.

She heard a commotion that caught her attention and she saw the men on the other side of the creek. Two of them. One of them had the staff. Somehow she knew this was not the present. She was seeing something that happened in the past. It was only a brief image before it faded. The next image that came into view was of one of them falling backward into the creek, releasing the staff into the water.

She stretched out her hand but it was out of reach. Her knees dug into the soft ground as she reached toward it, her muscles straining. Her fingertips brushed the cool water.

“Don’t touch it.” Caleb’s hand landed on her shoulder and pulled her away from the water.

“I have to pick it up.” Dark need pounded through her with such a violent fury, she shoved off his hand and reached for it again.

He practically tackled her like a defensive lineman pummeling the quarterback. He shoved her away from the edge of the creek, pushing her to the ground. His hands encircled her wrists like a vice as he held them in place over her head. His long lean form pressed against her, covering her, as he looked down at her.

Email ThisBlogThis!Share to TwitterShare to FacebookShare to Pinterest
Labels: Age of Wizards, epic fantasy, fantasy, in the tower of the wizard king, magic, Michelle Miles, On the Hunt for the Wizard King, wizard

Congratulations on the new release in your wizard series! I know how special this series is to you, and I'm happy that the second book is out where readers can finally see what happened since the end of book one. :-)

The excerpt is great!

Congrats on your new release! I really enjoyed reading it! Best wishes for many sales!

So insanely happy for you, Michelle!