Writing emotion is probably one of the hardest things to learn. You have to do it in such a way that makes the reader believe that’s what the character is thinking and feeling and you have to make the reader feel it, too.

I write romance because I love seeing two people overcome impossible obstacles and odds to get together and have that happy ending. That’s what it’s all about for me. And, as we all know, romance stories are character-driven. I can suspend disbelief in the hokiest plot as long as the characters are unforgettable and the romance is timeless. Seriously.

I judge a lot of contests and in some of the entries I’ve read, the story is great, the pacing is fine, the plot is good. The author even has a good voice. But the characters are flat, flat, flat. You have to dig deeper and go beyond the physical description to make me want to cheer for your hero or heroine. It’s not just about how they look, it’s what they feel and how they feel it. You have to make me ignore my dirty house, the litter box that needs to be emptied, and the mounds of laundry to spend three hundred pages (or more) with your peeps.

How do you give your character that emotional punch?


Dig deeper! I bet you’re wondering how you can do that. The best way I can describe it is put yourself in your hero/heroine’s shoes. Think like they do. Channel their personality through your fingers as you type their actions, thoughts, feelings, dialogue. 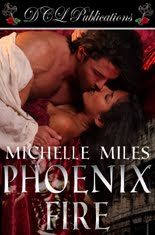 Before you run screaming from the blog, here are a few examples that can help you get that power punch. These are from my upcoming release, Phoenix Fire from DCL Publications.

"Oh, yes. I think you will. Because if you refuse," the Emperor said, "then I’ll have you both killed right now. Accept and perhaps one of you will live."

"We’ll do it," Cassius said quickly.

"No!" Elena shouted. "I won’t do it." She floundered in the agonizing maelstrom swirling within her. She couldn’t face Cassius in the arena. She wouldn’t! She’d rather die on Death Hill. She'd rather die in the jaws of the tigers. Anything but fighting Cassius, one-on-one to the death.

"Oh, yes. I think you will. Because if you refuse," the Emperor said, 'then I’ll have you both killed right now. Accept and perhaps one of you will live."

"We’ll do it," Cassius said quickly.

"Cassius, no—" The desolate shock held her immobile, a terrible sense of bitterness assailing her.

When I read the revised version, I can really feel her desolation, her shock, her fear all boiling out of her. The thought of facing the man she loves in the arena is devastating to her. And when I wrote it, I tried to channel that into Elena. I asked myself how *I* would feel if I had to fight the man I loved to the death. Not a happy feeling, to be sure.

But emotion isn’t all despair like this. Sometimes, it’s all about feelin’ the love. Romance novels (and Hershey bars) are about giving the reader that intense feeling of falling in love. Who doesn’t want to fall in love over and over again? If you’ve ever been there, then you know what I’m talking about. You can’t breathe if you don’t have that person near you. Your world is whole now that you’ve found your certain someone.

Showing with your character is all about feeling it, too.

Sometime during the night, Cassius slipped out of her apartment and left her alone. It would do neither of them any good if he were to be found in her company the next morning. It was a risk both of them knew they couldn’t take, even though she desperately wanted him to stay the night.

Her sleep had been restless. She tossed and turned for much of the night. Without a doubt, she had allowed herself to fall in love with him. As she watched, the sun’s rays filtered brighter and brighter through her room.

Can you spot the telling? Here, I’ll help. Telling: Without a doubt, she had allowed herself to fall in love with him.

BOR-ING. This makes me want to hit the snooze bar. Instead of telling the reader she loved him, how can we show it? Read below.

Sometime during the night, Cassius slipped out of Elena’s apartment leaving her to her restless sleep. Memories of skin meeting skin, breath mingling with breath, bodies brushing in the heat of desire and lust haunted her dreams. Her heart skittered in her chest more than once when she thought of him. And a constant flutter in her lower abdomen had her pressing the palm of her hand against her skin to quell the flurry.

With the blood quivering in her veins, she realized it was more than lust. More than illicit sex and defiant passion.

By the gods, I love him.

Rolling to her side and drawing her knees to her chest, she clutched the ratty blanket and squeezed her eyes shut. Was the Goddess of Fate playing a horrific trick on the two mere mortals? Or was her love for Cassius, the man who would be the Emperor’s killer and her savior, truly meant to be?

No matter how she played out the scenario in her mind, she still came up with the same answer: she would either be dead or alone. And neither sounded very appealing.

The revision is so much better than the original, don’t you think? It really shows what Elena is thinking and feeling about Cassius. I don’t know about you, but I’ve had intense emotions like this before. And instead of telling the reader she’d fallen for him, we feel it. So much better!

One more example and then I’ll close this post.

I never really "got" the emotional punch until a critique partner pointed out all my missed opportunities. And when I forced myself to sit and really think about who my characters were and worked on their emotional responses, I think I have a much better story.

She couldn’t—or wouldn’t—let it go. She had managed to work herself into a frenzy. "Just because I’m stuck in this pit of hell doesn’t mean I want to be. It doesn’t mean I want to kill people. It means I’m a slave of Hixyl, just like you are now. Just like any of us here in the Games. Forced to fight or die. I have no choice. I hate it!”"

What can be changed in the above paragraph to make it more emotional? To give it more of a punch? Here’s the sentence I changed: She had managed to work herself into a frenzy.

She couldn’t—or wouldn’t—let it go. Her heart palpitated at a quick pace. Her palms had broken in to a hot-cold sweat. "Just because I’m stuck in this pit of hell doesn’t mean I want to be. It doesn’t mean I want to kill people. It means I’m a slave of Hixyl, just like you are now. Just like any of us here in the Games. Forced to fight or die. I have no choice. I hate it!"

Not only do we see and feel her frenzy, we hear it, too, in her dialogue.

So, do you see how do you get an emotional punch? It’s your job as the author to feel character’s feelings, too. Don’t play it safe and tell the reader, show it. Push yourself. It’s not always going to be comfortable for you or your characters (and, if you’ve done your job well, your readers!).

If you can do that and translate it successfully on paper, then you’ll have one heckuva punch!

Now go take on the page!

Michelle Miles is a member of Romance Writers of America® and writes contemporary, paranormal and fantasy romance. For more information about her books or to sign up for her monthly newsletter, visit her website at http://www.michellemiles.net/.
Posted by Michelle Miles at 8:00 AM

Michelle,
Fabulous post on an ultra important topic. From the synopsis to the story, emotionally investing the reader into your characters is the key. My sincere best to you, enjoy your holidays, and I wish you every success! *Hugs*

Good job stalker buddy. I always ask how my character feels when she does something. Sometimes being in the characters skin is the way to see the emotion. Writing in first person pov is more emotionally involved for me. A good tip is to draft the scene in first and switch to third if that pov is preferred. And write internal dialogue to know their thoughts.

That emotional punch - that big POW that resonates with the reader - is what separates a good story from a great one.

What a good topic, Michelle! It gives the reader a chance to see what goes on "behind the scenes" when we are writing, showing that we really do work hard to make sure a story fulfills that desire to feel what the character is feeling, know what that character knows, etc.

As writers, it's important we craft and hone each sentence to provide the most powerful impact, give that POW! so when the reader finishes they are moved and emotionally touched by the words we have written.

Great examples of before and after, Michelle. And some were so small but so impactful! I hate revisions and re-writing, but it's a necessary step and, as you've shown, it makes the story better.

Wow! Being forced to fight to the death? That's great conflict!

And I agree, revising to get deep emotion is my favorite part of the writing process, too!

Great way to show not just tell, Michelle. I, too, judge a lot of contests, and I sometimes have to tell the writer that I didn't connect with their characters. I never really knew how to tell them to fix that...until now. Thanks.

And I love Vicki's suggestion. I write 3rd person POV. I'm going to try writing a scene in 1st person and convert it to third.

Such good examples! Thank you, for your insight. I find to reach that deep POV I also pretend I'm the character in whatever situation.

Michelle,
Good topic. I liked your revisions. I do at least three revisions on the story, before I send it off and usually one of these is nothing but uping the emotion.

Your character had to fight her hero...oh my that's great conflict.

Thanks, everyone, for stopping by! I'm actually home sick today with the crud. I crawled out of bed to check email and the blog and am sure glad I did. Thanks for all the wonderful comments!

Wow! What a fantastic writing lesson! Thank you for posting this, Michelle. And thank you for that helpful tip, Vicki! I hope you're feeling better soon. :)

Hi Michelle,
Great post! And so true. Thank you for the tip, I must go apply it to my WIP. :)