It’s all about Character. 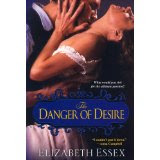 Today, I am thrilled to introduce you to my next release, THE DANGER OF DESIRE, coming on Nov. 29th from Kensington Brava.  This is the last of my Georgian period Dartmouth stories, although THE DANGER OF DESIRE takes place almost exclusively in London, England in the year 1799.  It’s the story of Captain High McAlden, whom we got to know as a secondary character in both THE PURSUIT OF PLEASURE and A SENSE OF SIN.
This book also introduces a new character to my readers, the heroine of the story, Meggs the pickpocket.  Meggs was both an easy and a difficult character to write.  Easy because I could all but hear her voice as I was writing, and difficult because she very well could have appeared to be an unsympathetic character—a conscienceless thief (at least according to the hero).
So how could I make a character who was in direct opposition to a well-known, and well-liked, hero appear sympathetic to readers? How could I get them on her side?

i'm hope the giveaway is including international reader

i never read your book before, but i love the excerpt elizabeth, good job ;)

Good morning my loverly friend, Ms. Essex. I'm so happy you are here to talk about Danger of Desire which is a fabulous book! I love Hunky Hugh.

Can you talk about him?

Good morning Eli, and YES, I am happy to include international readers in the giveaway! Thank you for stopping by and reading the excerpt. You can also find excerpts from my other books at my website:
http://www.elizabethessex.com/ElizabethEssexBooks.html

Love the excerpt. Enjoyed what you had to say about character development and garnering reader sympathy. Very helpful.

Good morning, Vicki! And thanks for your kind words about the book. :)

Can I talk about Hugh? Oh goodness, yes. I think at this point, after three books, it is safe to say that he is my favorite hero. Mostly, because after three books, I had an almost exact idea of what he looked like, what he sounded like and how he would act. I originally wrote him as a secondary character in THE PURSUIT OF PLEASURE, where he was young and gruff. By A SENSE OF SIN, he had grown and matured, especially in his principles and sense of morality, so when he find him again in THE DANGER OF DESIRE, he is a fully formed, experienced man. But he also has some deep vulnerabilities that I hope will surprise readers. :)

I think in garnering reader sympathy, what I was really trying to do was make sure my heroine was completely understood by the reader. And that's my job, to make all her actions, even the bad ones like picking pockets, so well motivated that the reader thinks, "I would have done the exact same thing." A reader may not like a character's actions, but if they can completely understand the reasons and motivations behind it, then they will take the character into their sympathies.
Thanks so much for stopping by this morning to comment, and good luck!

And I would like to add I'm adding a surprise drawing from Plotting Princesses to those who friend us today!

HUZZAH! Let me check my own FB page to make sure I'm 'friended." :)

Welcome Ms. Essex and what a terrific excerpt (as well as a wonderful book, I absolutely loved, loved it).

I enjoy stories where you feel as if you know everything about the characters, that they are so real you can see and hear them as you read. It makes the story that much richer in feel and I can become more enmeshed within the narrative from there.

As always, lovely to see you here at the Plotting Princesses. :-)

As someone lucky enough to get an advance read on this book, you not only delivered an incredibly sympathetic heroine (and a hot, hunky hero!!), but she was truly someone I was rooting for.

Thank you, Kathy! Thank you for your kind words!

(And I should explain that both Kathy and Vicki read an ARC of The DANGER OF DESIRE before it's release date next week.)

I completely agree with you. I love stories that immediately pull me into the characters' lives. Once I get emotionally involved with a character, I'll follow the book anywhere it wants to go!

It's a great thing to remember every time I start a new story. :) Thanks for stopping by!

Addison, thank you so much for stopping by!

I am thrilled that readers are liking this hero and heroine—and liking them together—as much as I do! When I first thought of pairing these two characters together I thought they were all wrong for each other, so of course, I had to throw them together and see if the sparks would fly. I think they did! :)

can't wait to read this latest story - your writing has always been a wonderous journey back in time !!!

and I find your method of character development totally right on - duh!! LOL.

thanks for popping by

Chris - thanks so much for stopping by. I know not every style of writing works for everyone, but I am glad to know I found a kindred spirit in you! For me, I can't write a book without knowing and understanding the characters first. I always say "I want to write a story about a girl who ..." I never think I want to write a story where they do this or that. But that's just what works for me ... and you!
Cheers!

You hooked me! Now I have to add Danger of Desire to my TBR list.
Fascinating character who earned my sympathy.

Hi Elizabeth,
Wow, I loved your excerpt! Can't wait to read Danger of Desire. I want to see how this character changes and affects the hero.

Good job and congratulations on your new contract.

I have to admit, just as I have for my hero, this heroine is my favorite I've written so far. She just had an engaging voice inside my head and I heard her talking to me, and to the hero everywhere I went. So glad I became a writer instead of a mental patient!

Thanks for stopping by today and good luck! Cheers.

I'm reading this book now and wow! Elizabeth is a rare talent. Her writing leaves me speechless. In a good way.

The excerpt of your new was great! I can't wait to read it. Characters are my hook. If I like the character and want to know what's going to happen to them, I'm hooked. It's hard to pry the book from hands.

Congratulations on your new release and new contract.

Thank you, Sylvia for your kind words. I hope you'll find this heroine knocks this self-assured hero right off his preconceptions. And I'm pretty sure he enjoys the fall. :)
Cheers!

But you of all people should know it's not talent—it's relentless hard work. I am simply relentless in my editing process and I try and try to make every word do heavy lifting, so both the dialog and internalizations are fresh and unique and are specific to the character.

So glad to know you're enjoying the book! Cheers!

Well, Pam P we just need to get a copy of TDOD into your hands and hope no one even tries to pry it loose!

I am so glad to hear there are other writers and readers who love character-driven books! Enjoy the holiday and I hope it is full of extra time to read. :)

Oh my gosh! What an amzing excerpt - You NAILED it!!! If I don't win the book (fingers crossed :)) I will have to fun out an buy it! Congrats!!

Thank you, Sasha! I'm so glad you enjoyed it. I have to say it's always really hard for me to choose an excerpt. I always want to start at the beginning and just keep going... I can't wait for this book to make its way onto the shelves and onto people's E-readers.

Hope you have a wonderful holiday. (I hope to start the pies this afternoon.) Cheers!

Elizabeth, the scene is wonderful. In this short bit, you definitely made me want more of Megg.

Congratulations on your upcoming release. It sounds like it will be a fantastic read!

Sheila, thank you so much for coming by today and for your kind words. I am so glad you liked the excerpt and Meggs. I am sure you're going to love the rest of the book then! :)
Cheers and good luck!

Thanks for your kind words, Phyllis. TIme does seem to fly doesn't it! And I just completed revisions for book #4, which now has a release date in August 2012 and will be called ALMOST A SCANDAL. No rest at all for the wicked. :)
Glad you enjoyed the excerpt and thanks so much for stopping by. Cheers!

Hi Elizabeth,
Great excerpt! I think you nailed it. :) I'm looking forward to getting the book. I love your writing!

Thank you so much, Karilyn. I am so glad y'all are loving this book as much as I am. :) I really had a ball writing this book and living with these characters—so much so that I think I got a little depressed when I finished the book. So then I just had to go ahead and make Hugh and Meggs secondary characters in my next book ALMOST A SCANDAL. Some characters are too much fun to retire.
Thanks so much for stopping by today! Cheers.

We have our winners!

The lucky commenters have each won a copy of THE DANGER OF DESIRE:

I'll contact you by email to send out the books. Cheers!