Get to Know: Cynthia Woolf & Tame a Wild Wind

Welcome, Cynthia, to the PP. Let's get to know you:

How did you get from your day job to writing romance?  I am lucky in that I am able to write full time.

Morning, afternoon, or evening person?  Early morning person, I mean really early, like 3 AM.  I get more done at that time of day than any other.  When you have insomnia you don’t sleep much.  J  So I get lots of writing done.

Music--with or without? What kind?  I don’t use music when I write.  I know that a lot of people do.  Two of my critique partners listen to music when we do our “just write” sessions.

First or third POV?  I write in third person but I like reading both.  It doesn’t matter as long as it’s consistent through out.  After writing in third for so many years, I don’t think I could make the change to first person.

How's tricks? Do you juggle multiple projects?  I’m often writing 3 or more books at one time.  I’ve no idea how I do it.  I just write on whichever book is calling to me that day.  Sometimes it the futuristic, the next day it might be my historical westerns.

What's harder: beginning, middle, or the end?  Middle, definitely.  I always know the beginning and end of my books.  I write romance, so there is always the ‘happily ever after’ in my books.  But I often suffer from a sagging middle.  Then I have to brainstorm with my critique partners for new scenes.

Revisions: Love 'em or hate 'em?  Hate them, if I don’t have a real direction given.  Or if they are really against the grain of the story I want to tell.  I’m lucky in that I indie publish, so I don’t have too many revisions.

How did you come up with that title?  Usually, the title I start with isn’t the one I end up with.  I brainstorm with my critique partners for a better title.  If I’m doing a series, which I usually do, then the titles are easier, once that first one it done.

Best advice anybody every gave you?  The best advice I ever had was, publish yourself.  I don’t have anyone telling me that my story is not what the public is looking for now.  I realize that publishers have to try and read the market, but I think they need to take more chances if they are to survive.  There are too many really good books out there being published by the authors and they are making a whole lot more money than they would with a publisher.  And their books are out there now, not 18 months from now.

Fill in this blank: My ideal fictional hero would think me gorgeous no matter…what I weigh.

What's your favorite dessert?   Carrot cake like my mother made.  Still trying to find one to buy, they are never as good. 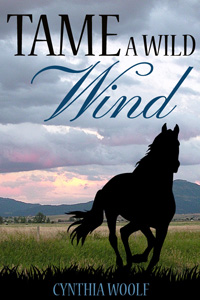 Here's an excerpt from Tame a Wild Wind:

They was about to hang his brother.

Harry’s stomach roiled with nausea.  From the alley next to the saloon, he watched the Ranger, Sam Colter, march Frank up the gallows steps.  Watched the hangman put a noose around his brother’s neck and ask if he had any last words.  Watched, helpless to do a damn thing about it.

It weren’t Frank’s doin’ that Colter’s wife and kids had died in that fire.  They’d only wanted to have a bit of fun with the woman, make a little money, that was all.  They hadn’t wanted to see her and those girls die.  That was never the plan.

Fool woman.  If only she’d waited.  Her father would have paid the ransom.  A bank president could afford it.  Instead, she’d broken loose.  Thrown that lamp at his head, trying to kill him and killed herself instead.

The fire had been fierce.  It moved so fast like the house was made from kindling.  He rubbed the puckering skin on his arm, feeling the sting of the flames all over again as his flesh charred.  He couldn’t have saved them, not and gotten himself out in time.  Harry clenched his fists.  It wasn’t his fault.  And it wasn’t Frank’s either.  It wasn’t.  She was to blame.  Frank shouldn’t have to die for something she’d done to herself.

He had to stop this from happening.  He had to save Frank.

Self publishing may be difficult at times, but I'm convinced it's the way to go. Thank you for sharing your thoughts.

And if you want to try a fantastic carrot cake, I have a killer you can make.

Best success to you.

Hey Cynthia, nice interview! Interesting excerpt, too. Is this book 1 in the series?

Hi, Cynthia and thanks for visiting the PP today.

I have to say you had me in your excerpt with "They was..." Very good opening hook.

S. L. I'd love to have your carrot cake recipe. If you want to send it to me, my email is woolfcindy@aol.com.

Christine, Tame A Wild Wind is the second book in the series though it is a stand alone title. The first book is Tame A Wild Heart. Thanks for asking.

Thanks, Vicki, for having me here today. Glad you like my opening.

What a compelling hook! Now I have to buy the book to see what happens next.

Cynthia, Nice to meet you here and find so many of your questions I would answer exactly the same way. Your series sounds like a winner.

Thanks Roxy. It's one of my favorite covers too.

Hi Sharon. Nice to meet you too.

Hi Cynthia,
I see you all over the place. Love, this cover and now I have to go out and buy the book. Western historicals are one of my favorites. Glad you visited us today.

So funny Vicki!!! I was going to say the same thing. "They was..." LOL Talk about getting someone's attention. Very smart. Gripping excerpt with an amazing need to know more feeling.

Dear, I do love visiting this place.

Hi Sylvia. I hope you like the book and thanks for buying it.

Hi Cynthia,
Welcome to the PP! I loved the interview, the cover and the excerpt. I wish you good luck in the indie world!!

Thanks Karilyn. I've had a great time today.