This morning, I woke up to snow. Now, some of you might say that's typical, and it probably is in your part of the world. But in mine, snow is a treasure.

I'd risen early to go to my workout. And while the dogs went out for their morning business was when I noticed what I first thought was rain, sleet, and ultimately, snow.

A little snow won't stop me. I have a four-wheel drive vehicle! I can put my car on the lean and mean streets and get anywhere. 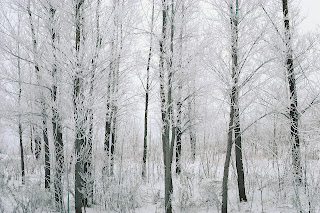 This morning, I wound along the lake road to my friend's house. There were so few cars out. The street was coated in the white stuff. The snow was flying fast and furious. I even turned on the fog lamps.

I picked up my gal pal and as we turned on to the main street, we experienced thunder and lightning. Pretty exciting to be in a thundersnow.

I had to cross four small bridges and literally released my foot from the accelerator and let the car coast across. When we pulled into our parking spot at the gym, the instructor's car was the only one we noticed.

She held class just for us and another brave soldier.

What a difference an hour makes! In that small amount of time, the parking lot had turned to slush. The roads did too. The bridges were a tad icier.

Four hours later, everything was gone.

Just a typical winter's day in my town.

Are you ready for summer?
What's your favorite season?

Vicki Batman just finished a diet Coke and is headed to the kitchen for another.  Her new story collection, Little Birdie Who…and Other Stories will be launched February 1. Find her work at: Amazon.com, BarnesandNoble.com, Smashwords.com, Museituppublishing.com, and NobleRomancePublishing.com
Posted by Vicki Batman, sassy writer at 1:30 AM

This Texas weather. Blink and it changes. I don't mind the cold so much but when the ice and slush hit the roads, I stay in my house all snugged up and warm and safe from the rest of the crazy drivers. This former Florida girl doesn't drive on that stuff!

Hi, Kathy! I'm with you on ice and slush. I'd rather dive under a blanket, put on an old movie, do needlepoint or read. Oops, it's not even like that outside and I want to do those things. ox

Our neck of the woods is great! We had a horrendous downpour on Monday including flood alerts for Oahu but today it's gorgeous, sunny, nice trade wind. A bit cool at night but hey, we can all live with that!
Aloha from the Islands!

You brave and adventurous soul! I saw the snow, reveled in it's beauty for a moment (while the coffee was brewing) and took it as an indicator from the Almighty that I should snuggle down on the couch with a book for as long as I could get away with!

Hi, Elle! Your neck of the woods is great. Flood alerts are very scary, tho. Glad that worked out. Aloha to you too!

Hi, Vikki! My trusty Jeep can take me lots of places. People make fun of me for having four wheel drive, but they don't when the weather is yucky. I'm with you on the snuggling part. Thank you for visiting with me, my friend. Hope all is well with you.

Note: as I walked thru the breezeway to the garage, I noticed a little anole running around. Kinda early for him and was probably disturbed by the mower men. So I rescued him and set him in the sun.

Weather is crazy any more. You live in Texas and had snow. I live on the East Coast where it was in the 60's a few days ago. Cooler now, but no snow in the forecast. And I'm always ready for summer.

Vicki, what is an anole?

Hi Vicki,
I love winter! I love to put on my sweaters and go face the cold. And most of the time I like driving in snow. It's like me against the weather, who's going to win? Me, naturally! :)

Hi, Cara! You wouldn't believe how warm it is now. I'm running around in a sweat shirt and usually there's a t-shirt in there somewhere.

An anole is that little lizard that changes from green to gray, etc. Do you have them?

Thanks for visiting with me, girlfriend. ox


Hi, Karilyn: you have great attitude when it's cold. I'd rather retreat into the blankie on the couch with kitty and book and old movie and diet coke... lol

Great story, Vicki! Sounds like Maryland. We have crazy, windy snow one day and spring-like temps the next. Mother Nature likes to keep us guessing, doesn't she? LOL.

Hi, Joya! So your weather swings like ours does? So far today, I've seen TWO anoles. Or the first is hanging around. lol

Thanks for sharing, sweetie. ox

Hi, Vicki, no we have no lizards where I live. They're in Florida and maybe in some of the southern states, but not up here in Delaware. I like lizards.

Oh Vicki! I love it when it snows. But I love it even more when I don't have to drive to work in it. When it snows, I wish it would just dump on us and close everything down. I'd rather have cold weather than the 108 we have during the summer. I can't take the heat anymore.

Hi, Sylvia! I love the snow too, especially the big ones like you mentioned. All does shut down. The roads are super quiet. It's quite fun.

When the boys were in school and had the rare day away, they would go to the alley and slide down it on trash can lids and a funny little pedal car we had. I loved watching them.

Thanks for being with me.

Ooooh, snow! That sounds like typical TX snow, but it's amazing while it lasts!

My fav TX seasons are spring and fall. Here in FL, I'm cool with all the seasons. Even when it turns cold here. :)

Thanks for sharing your thundersnow story!

Hi, Nancy! I'm guessing snow is rare down there. And yeah, the thundersnow was way cool. I can't even remember one before now. But then, my memory... I guess we shouldn't go there. Happy day to you, my friend.