Hi, my name is Michelle. And I’m a Trekkie 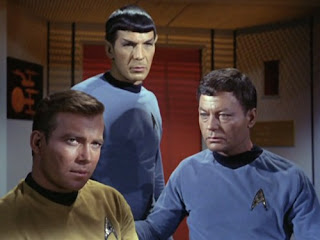 I have a confession to make. Long before the days of ST:TNG (that’s Star Trek: The Next Generation for those of you who don’t know), I was into Star Trek. I watched the original series with humble devotion. Back then there was no such thing as a DVR (horrors) and I set my VCR (remember those?) to record every episode of the old three-season show.

Was it cheesy? Yes, of course it was. We always expected at least one Red Shirt to get killed during the show. Because, as we all knew, Captain Kirk, Spock and Bones would never get a scratch. “The Trouble With Tribbles” was a natural favorite. “A Piece of the Action” another. I loved seeing Kirk & Co. in 1930s Chicago-esque clothes toting real guns.

When the ST movies came, the first one was a total disappointment but the second one made up for it. Kahn, that old Space Seed, came back to haunt us! It was the first time we saw our heroes in real peril. And Spock’s self-sacrifice actually turned out to be quite logical.

After The Next Generation came on strong, the Star Trek Conventions started up. Anyone remember these? They were solely devoted to us Star Trek Fans. Yes, I admit it. I went. I toted my Star Trek Compendium and had some of the original crew members autograph it. (I still have it!) I got to meet Nichelle Nichols, George Takei, James Doohan, Jonathan Frakes, Patrick Stewart.

My friends and I played the Star Trek RPG game. I wrote fan-fiction.

Ah… those were the days.

I wasn’t much into DS9 or Voyager or Enterprise. By then, my interest in Star Trek had waned some. I was busy with my life, raising a kid, starting to write books again.

So when I started seeing previews for the remake of Star Trek by Lost-Gods J.J. Abrams and Damon Lindelof, I knew my interest would spark again. It looked awesome. It looked amazing. It looked like I needed to beat a direct path to the movie theater.

Of course everyone had seen it before me but I finally managed to get to the theater to see it. It didn’t disappoint. There were a few things in the move that bugged me as a die-hard Star Trek fan. But overall, it was probably the best sci-fi flick I’ve ever seen. It tops out anything the previous Star Trek films did. I can't wait for the second one!

You better believe I’ll be in line at the theater to see them.
Posted by Michelle Miles at 7:13 AM

Hi, Michelle. I was a Next Generation trekkie. Watched a bit of the original and the subsequent movies and Deep Space Nine.

YAY another original Star Trek fan. I watched those older versions of each episode until I could practice quote the dialogue verbatim!

The original cast has been and always will be Star Trek for me. Nobody could overact and still get the message across like James T. Kirk. Nobody was a logical and supposedly emotion-free but so filled with angst and deeply buried emotion as our friendly Vulcan, Spock. And nobody delivered one-liners better that Bones. (Gee, can you tell I'm a fangirl!)

I glommed onto the books when they cam out, read the fan-based stories, got the trivia books, everything. Even wrote my own Star Trek fan-fic before fan-fic was popular. LOL

Great post and brings back lots of memories, Michelle. I did like the first "new" movie and i'll definitely be watching the second one too!

Michelle, I too just posted a Trek titled blog today, and I have to say I'm 48 by like a little kid when it comes to the Trek shows and movies. I've seen every episode (thanks to Netflix) and of course loved the movies. You are right that the new JJ Abrams take was the best, and his casting for the main characters and the jobs they did were amazing. Keep being geek like this, and you've got a steady fan :-)

More like in the pilot they rehashed later- in the actual series - he was more detached. I liked that -shrug

those were the days!

While I didn't watch the original series outside of a couple of episodes, I have seen all the movies and all the other series. I love the new movie too! Can hardly wait for the next one to come out. Engage!

Kathy! I wrote fan-fiction, too!! LOL! How funny! I loved those characters so much. Before Comic Con there was the ST conventions which I totally went to. Showing my nerdom here but it was so much fun. Glad to meet a fellow trekkie :)

I am so a total trek gr
Eek! I started watching when I was about 4/5, my uncle was 19 and a huge fan, I wanted mousekateer, he won with Trek. Spock would have made the best dad ever! Lol

I too went to a lot of the conventions, especially once I started working at the Las Vegas Hilton.... loved original, tolerated ST:TNG, couldn't stand ds9, loved Voyager and Enterprise. I used to belong to a Klingon fan club, still have costume somewhere.....
Yeah, I remember those days. :-)

Hi, I love the new trek movie.. can't wait til the next one comes out. I watched all the reruns in the 70s and 80s. I have seen every movie and loved the Next Generation. great post.Love the Plotting Princesses and can't wait to read some of the books listed here. Will be back again. Hey would love a follow and comments too. Working on a novel now too. :)