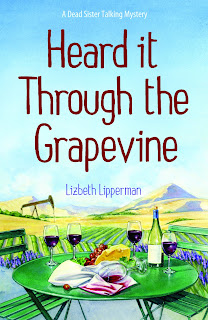 Today is the official release date for HEARD IT THROUGH THE GRAPEVINE, the first book in my new series from Midnight Ink titled A Dead Sister Talking Mystery. I thought it was the perfect segue into talking about ghosts and supernatural things that have happened  to us. First, I'll give you the blurb so you can get a feel for the story.

Sisters Tessa and Lainey Garcia weren’t on speaking terms. But now that Tessa’s dead, her wisecracking ghost is making up for lost time.
Lainey Garcia left Texas nine years ago after her sister Tessa married the only man Lainey ever loved. So when Tessa’s house explodes, the last thing anyone expects is for her to appear to Lainey . . . as a ghost.
Formerly a part owner of the biggest vineyard in the region, Tessa’s got the goods on every fake, floozy, and two-faced liar in town. But Tessa doesn’t know who killed her, and she asks the remaining Garcia girls to uncover the truth. Setting out to fulfill their sassy sibling’s wish from beyond the grave, the sisters discover a mile-wide list of suspects who wanted Tessa dead. Learning the hard way that killers don’t like snoops, Lainey fears she’ll be the next Garcia sent to the big vineyard in the sky.

Okay, this book is loosely based on my own four sisters, one of whom died way too young. Although my sister who died is nothing like my smart ass ghost, the book does show the relationships I still have with all my sisters. My sister Theresa was two years older than me and we fought like cats and dogs growing up. The two oldest sisters were best friends as were the two younger ones. Tessie (as we called her) was a loner with her own set of friends. She didn't want any part of me, and that was okay.

It wasn't until we were both adults with children of our own that we began to get closer. A year before she died (heart attack) she told me a secret that no one else knew. I guess she wanted to get it off her chest. After she died, my younger sister badgered me into telling her over the phone one night, and I swear to God, the lights flickered. It freaked me out enough that I never repeated her secret to anyone else.

Now here comes the spooky part. After I had written Grapevine (formally titled TALK DEAD TO ME) I was guest blogging and mentioned the story I just told you. When I went to post it, the spam word was TESSE. OMG! My sister is Tessie and my ghost is Tessa. Talk about getting chills.

I was a skeptic until then, but now I am a believer that there are things that go bump in the night. I know some of you have a story like this, and I'm dying to know. Some lucky commenter will win a copy of HEARD IT THOUGH THE GRAPEVINE (US and Canada only.)
Posted by Liz Lipperman at 8:07 AM

We had a family ghost living with us until the kids all got married. My partner's grandmother. She watched over the kids, and occasionally would take the pantie hose we'd throw out and put it back in our drawers.

I wish I could say I had a ghostly exprience, but I can't. Then again, I'd be so freaked out, it's best that I haven't!

Too funny. Now that's the kind of stuff I believe, Nora. My mother hated to throw anything out. One day I saw her hanging out my baby's wet Pampers. Your MIL was probably frugal like that, too. Some people say they have their own guardian angel.

Liese, are you squeamish about stuff like this? I love it.

You write such fun books! This one sounds like another keeper.

Well, I don't know if this qualifies as a ghost story...

But one of my closest friends from high school visited me in a dream one night when I'd gone home to Arizona for a visit. At the time I thought it was odd because in the dream Denise looked young again like she had when we were in high school. I remember feeling sad and telling her that the world would be less beautiful without her in it.

When I woke up the next morning my sister got a phone call from Denise's mother. Denise had spiked a fever and died during the night.

It still moves me to tears that my sweet kind-hearted friend would take the time to say good bye and comfort me upon her leaving earth.

I forgot to ask why did you change the title from Talk Dead To Me?

Oh, Kat, that almost made me cry. It definitely qualifies as a supernatural experience. And they changed the name of the first book because they wanted to call the series A Dead Sister Talking Mystery Series and didn't want the word dead in both.

Frankly I like my original title better. My series title was The Ghost and The Garcia Girls. They said it sounded too old. What do I know?

Nope, never had a ghostly experience, but that doesn't mean I don't believe in them. You write such fun books.

Hey, Pam, thanks for saying that. I do have fun with the characters. And you never had anything spooky happen to you?