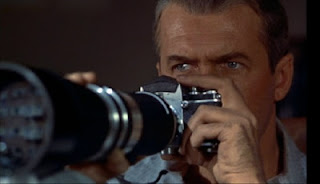 It all carried over into my adulthood.
I can remember movie lines without thinking. I’ve learned the fine art of using them in everyday conversation. People who know me well and are paying attention will realize this. It’s an art. ;) I can rattle off actors names and what movies they were in. But in my old age, this is becoming more difficult. So my secret weapon is IMDB, either online or the app. 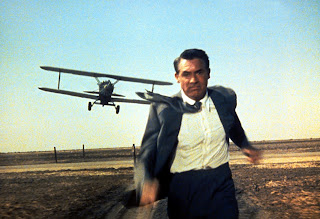 I discovered not long ago my local library has quite a large DVD collection. Imagine my surprise! I found several Alfred Hitchcock movies on the shelf and checked them out. The best part was it was for free! Can’t beat that with a stick. I carried home Rear Window and North by Northwest. Husband hadn’t seen either.

These are not like the movies made today. They’re not “in your face” with explosions and people shooting each other every ten seconds or throwing f-bombs around. These are “thinking” movies. Suspenseful thrillers that make you pay attention. Kind of like Sixth Sense with an ending I never saw coming.

I think he enjoyed the movies. At least he seemed to. When I can get back to the library, I intend to look for Vertigo and The Man Who Knew Too Much. I think he’ll like these too.

Some of my other favorite (old) movies include Gone With The Wind, The Quiet Man, Ben Hur (actually, anything with Charleton Heston is a winner in my book!). What about you? Are you an “old movie buff” and what are some of your faves?
Posted by Michelle Miles at 1:30 AM

Michelle, I'm a huge movie fan. I'm like you I can quote movie lines at the drop of a hat. Although some of mine are kinda obscure. Love old movies, especially old musicals.

There's something about the old movies, the Cary Grant comedies, the Bob Hope and Bing Crosby Road movies that just takes you back to your childhood and happier times. Watching old movies always puts a smile on my face.

Oh Michelle,
YOu bring back some memories. The first time I saw Gone with the Wind was on a HUGE half circle screen ( of course it could have been HUGE, because I was child). I was in awe of it all and cried all over the place.

I LOVE The Quiet Man! When I went to Ireland, I went to the places you see in the movie - the 'Vicker's ( the preacher)house' and the ivy covered bridge next to it, the cottage he moved into and the bar and street in front of it. It really brought that movie to life!!!

Me! Me! Me! Huge movie fan. I'm a little tired of films with tons of CGI and tend to go see ones at the indie theaters. I always have TCM as a go to on my remote. And you posted a picture of my all time fav, Rear Window. It is Brilliant. They say Vertigo is better, but the heroine annoys me. Thelma Ritter and Grace Kelly in RW are great.

I also grew up with parents who loved movies. Mom was absolutely smitten with Paul Newman. Cat on a Hot Tin Roof and Long Hot Summer come to mind. My dad was a McQueen fan. The Great Escape (fantastic cast of characters) and Bullet. Oh that chase scene in Bullet. Great memories.

Oh my, what an amazing coincidence. My father was the managing director for the Scandinavian countries of 20th Century Fox when I was a kid. I ate, slept, lived movies, had freebies to theaters to watch. I met Elisabeth Taylor when she was in Finland promoting "Cleopatra." Gregory Peck was a guest in our home when he was in Helsinki promoting "The Snows on Kilimanjaro." I can relate to every word you say. We've had a rich childhood, I think.

I'm not a huge movie fan. But I'd say Dr. Zhivago is one of my all time favorites.

Rayne, what an amazing story! That is really cool you met such big stars. I'm envious! :)

Thanks for sharing and stopping by.

Wonderful movie, Janie! That's a great one. Thanks for stopping by :)

Quoting movies is fun. And I love the oldies!

Phyllis what a great tour of Ireland! And GWTW is one of my faves. :)

Great movies! I confess I've not seen Bullet. Adding that to my list. :)

That flashback to your mom and dad is adorable!

I love the old movies. they actually told a story and had twists and turns that had to do with the characters. I am getting really tired of superhero movies and I start snoozing after the tenth car crashed or the twentieth plane/boat/city blown up.