Do You Believe in #Ghosts? by Karilyn Bentley 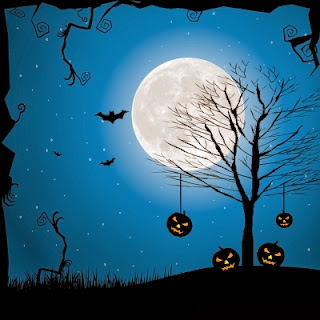 
Tis the season for spookiness and things that go bump in the dark. I don't know about you but I love fall. Here in Texas, it usually doesn't get very cold this time of year, but it does cool down into the 70s, which makes for great trick or treating weather. And seeing all the Halloween decorations around my neighborhood makes me think of the more spooky side of the holiday.

Yep, I'm talking about ghosts. Do you believe in them? I do. Maybe not the way they're portrayed in the movies, but I do have a healthy belief in otherworldly spirits. Perhaps that's because as a child I used to be able to see the occasional ghost or feel their spirits haunting certain houses. But my favorite ghost story really isn't mine, it happened to a colleague.

This lady said if she couldn't see it, then she didn't believe in it. Naturally, for her, ghosts did not exist. Until she built her dream home, that is.

After sinking all her money into her dream home, it started having foundation problems, the only house in the neighborhood to literally crack in half. The swimming pool even shifted so the water would seep out of one end since the other end was higher. While annoying, and according to whoever she spoke to, unfixable, it still wasn't as bad as the ghost.

When they moved in, they painted their five year old's room purple. A day later, child-sized handprints danced across the wall. They repainted. The handprints returned. Kind of creepy, but they thought their daughter lied to them about touching the wall. Then her daughter started talking about her new friend and how they liked to play together and the lady just thought the kid has an invisible friend. Nothing that abnormal. Until her housekeeper quit, claiming she saw a ghost and refused to work in a haunted house. That's when she realized she had a problem.

She then told her daughter to stop playing with her new "friend" and started walking her property line. Behind the back fence was a stream and she found old headstones from graves. Yep, her house had been built on an old graveyard. She tried to call one of the TV ghost hunters but the ghost wasn't aggressive and they only wanted aggressive ghosts for their shows. The colleague ended up moving.

What about you? Have you ever seen a ghost? Do you believe or not?


Karilyn Bentley
www.karilynbentley.com
Fantasy with a touch of funny
Magical Lover
Warrior Lover
Facebook
Posted by Karilyn Bentley at 1:00 AM

My mother said that every time her friend did something that her dead husband didn't like, she would find the dishes he collected sitting in the floor. She would hear the dishes rattling, get up and they would be sitting in the floor in front of the cabinet they were in. She also saw him one morning when she was getting ready for church. He told her to come on or they were going to be late. Kind of creepy.

That is creepy, Sylvia! I've never had things move like that before. Pretty scary!

What a story! No, I've not had an encounter. Sylvia's story is crazy too.

I definitely believe in ghosts! My playmate when I was a child was one. I was the only one who could see her and she helped me through some very rough patches, always there when I needed her. I was never afraid of her, and have fond memories of her to this day.

Although mine is a nice story, I do believe in the creepy kind, too, and don't want any of those ghosts near me. :-)

I guess if the bottom line is do i believe that dead people can haunt us - No.

but in fiction it's akin to Harry Potter - I don't believe in Hogwarts but it's fun to watch!

The house we use to live in had a basement and my boys refused to go play in it. They said an old man sat on the end of the couch smoking a cigar. They truly believed it and over the years their description has never varied.
R.E. Mullins

Thanks for stopping by Vicki!

Wow, Kathy! That's pretty cool! But you are right, I would not want one of those scary ones. What happened to your ghost?

Hi Chris, not everyone believes and that is fine! And I love Harry Potter. :)

Hi R.E.! That is a great story! I don't blame your boys for not going downstairs. It would freak me out too to see someone sitting in my basement smoking! Thank you for stopping by!

I have never had an experience of seeing a ghost, but I believe in the possibility.

There have been times I feel my mom's presence, but I haven't her since she died.

Hi Sandy,
Thank you for stopping by!! I think it's easier to feel a presence than to see it. Isn't it nice to know your loved ones still watch over you?

I also believe in the possibility but haven't experienced it. I'd love to think of my mom watching over me and being supportive esp. since she died young and missed so much. But it goes to believe that if we do believe in the nice ghosts, there has to be not nice ones... so I don't want those!

I've not seen or heard any ghosts.

The only thing really creepy I ever experienced was as a cop. I responded to a ceremony in which Satanists sacrificed a goat, melted candles, the pendagram chalked on the cement floor.

They were gone by the time we got there, but let me tell you, the wicked vibes could still be felt.

It was one of those times I brought my cross out from under my shirt and fondled it often!

Hi Melissa,
You are right. If there are nice ones out there, then there are the not so nice ghosts. I don't want to meet one of those! Thank you for stopping by!

Phyllis,
How downright frightening! That is something that shouldn't be messed with under any circumstance. How creepy! I bet that place was filled with a ton of evil. Full body shiver.