Today, we welcome guest author E.E. Burke, who writes sexy, suspenseful historical romance set in the American West. Her writing has earned accolades in regional and national contests, including RWA’s Golden Heart. She recently released Her Bodyguard, the latest book in the series Steam! Romance and Rails. 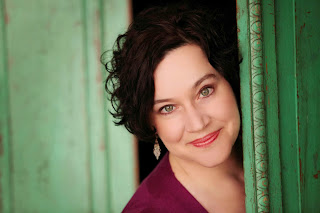 Something about railroads calls to my romantic nature. Maybe it’s the passion and excitement of a long-ago era when America expanded its boundaries as fast as men could lay track. I wanted to give readers a glimpse into that exciting time period, and that’s how the idea came about for the series Steam! Romance and Rails.

Both books in this series are set against an actual construction race between two railroads with long names that were dubbed “The Katy” and “The Border Tier.” Passion’s Prize focuses on The Katy’s story. Her Bodyguard follows the troubled Border Tier and a woman embroiled in a bitter war between the railroad and rioting settlers.

I’ve often found that historical fact is better than anything I could’ve made up, and in this case, I wasn’t disappointed. The story of the Border Tier has all the makings of an epic: crooked politics, underhanded landlords, angry mobs, liars, cheats, and mysterious killers. It wasn’t difficult to craft a suspenseful tale around colorful historical events and characters. My challenge was developing primary characters as compelling as the supporting cast.

For inspiration, I dove into the history books. The fiercely independent Kansas women who championed suffrage and equal rights served as models for my heroine, Amy, and the tough-as-nails but troubled survivors of Missouri’s guerrilla war gave me inspiration for my hero, Buck.

When I put these two together at cross purposes in the midst of a cutthroat railroad competition, with settlers’ rioting against the owners and a mysterious character stalking the heroine, the story just came together beautifully.

Buck and Amy are so wrong for each other on the surface, but so right for each other when in comes to what counts: the heart. But first they have to overcome deceit and betrayal—and redemption is really what is at the heart of this story.

“Your husband abandoned you in Girard?”

Irritation flickered across her face. “He’s not my husband, and he didn’t abandon me.”

It was on the tip of Buck’s tongue to ask why she was traveling with a man who wasn’t her
husband. But then, what did he care who she traveled with? He opted for a safer question. “Why were you there? From what I hear, it’s not exactly a safe place for a woman.”

She finished chewing the last bite before responding. “I had business in town.”

Her lips sealed. Apparently, she didn’t wish to elaborate.

Buck smoothed his mustache with his thumb and forefinger, mulling over her hesitation. Just what kind of business would a wealthy lady have with a bunch of rowdy settlers? When he’d come up on her, she’d been terrified, even after he told her he was trying to help. Had even offered him money. More money…

His scalp began to tingle, a sure sign something wasn’t right. He leaned forward, draping an arm over his knee to appear casual. “I didn't mean to frighten you when I rode up. You must've been expecting trouble.”

“Trouble is one way to put it….” She toyed with a curl at her cheek, not meeting his eyes. “You see, I thought you were going to kill me.” 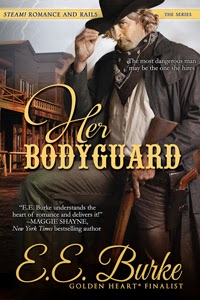 The most dangerous man may be the one she hires…

For America “Amy” Langford, investing in the Border Tier Railroad isn’t about chasing riches. The savvy businesswoman is after bigger stakes: influence, respect, success her father didn’t live to see.  Rioting settlers and underhanded competitors can’t stop her, but a killer might. When a stranger comes to her rescue, she trusts her instincts and hires him as her bodyguard.  Buck O'Connor has put his violent past behind him, but being a wanted man dictates a life of deceit. So what’s one more lie? He becomes Amy’s protector so he can secretly thwart her railroad’s progress to help his cousin avoid financial ruin. A great scheme—until he falls in love.  While Buck hides his true purpose, Amy lies to herself about her growing feelings for her bodyguard. But the price for deceit is steep, and secrets from the past could destroy their future...if they survive.
Her Bodyguard is available on Amazon (http://amzn.to/15nfO3m) and B&N (http://bit.ly/1hFvYrk). It can also be purchased in paperback (http://amzn.to/19j3HE4)

Other books in the series 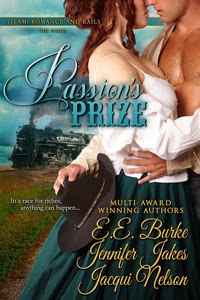 Passion’s Prize by E.E. Burke, Jennifer Jakes and Jacqui Nelson
Three interlinked novellas tell the stories of three women caught up in a cutthroat competition between two powerful railroads. In a race for riches, anything can happen.

Today, I’m giving away a free eBook copy of Her Bodyguard. To be entered in the drawing, just leave a comment and don’t forget to provide your email.

I’m also running a special promotion to give away a free weekend at the romantic Victorian-era Bed & Breakfast that inspired me to set a story in historic Fort Scott. 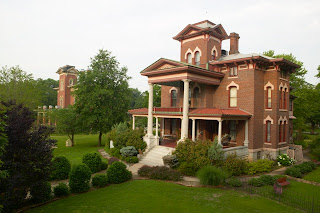 If you want to enter this drawing, just visit my website. https://www.eeburke.com/

I have quite a few favorite Western books and shows. But my current favorite is the AMC television series Hell On Wheels, which follows the building of the transcontinental railroad through the lives of characters who inhabit the moving town they’ve dubbed “Hell On Wheels.”

Have you got a favorite Western book or movie or television show? What is it, and why is it your favorite?

Thank you so much, E E Burke for visiting
the PP today!
Posted by Vicki Batman, sassy writer at 5:30 AM

Thanks for this wonderful post, and the great introduction to your books!

I have to say that my favorite western of recent years has to be the genre mash-up that was "Cowboys and Aliens" but I think that was only due to the charisma of my faves, Daniel Craig and Harrison Ford. :)

But all in all, I'm so glad to see Westerns coming back in the romance market! Cheers, EE

Hi! EE, and thank you for visiting the Plotting Princesses. I love reading historicals because they take me to a different place. As for a favorite Western....hmmmm...I like several: The Man Who Shot Liberty Valance, The Searchers, Red River--all have John Wayne. Interesting, Vicki.

What I love about your post is that you say there are really a ton of "real life stories" in the history books and you just had to add the characters and the "uumph" to make it fiction. That is so cool. I don't know much about that period of history besides what I see in movies. Your books sound awesome.
Patti

I love western historical romances and I'm thrilled to see more of them making their way into the marketplace. More lovely stories for me to read. There's something about that time period, the American West, that was open and bigger than life. I can see using actual historical events from that period, they'd provide so much realism to the story.

Historical romances are my very favorite! I will have to read your books! This sounds fascinating! Love the excerpt! Thanks for visiting the PP!

Love the excerpt! I will definitely want to read this series!

Love the excerpt. Sounds like a great read. Thanks for joining the Plotting Princesses today. I will watch any western Sam Shepherd is in. Hey, even if I couldn't see the screen, I'd just listen to his voice. But I'm strange like that.

Thanks Elizabeth, Sylvia, Vicki, Patricia, Kathy, Alisha, and Cathy. Wow. I'm so glad to here you all love Western historical romances. I had been told (too many times to count) that publishers didn't want historical romance set in America. But after I encountered the fan base for Hell On Wheels, I was convinced there was a latent hunger for this kind of book. This is what led me to self publish. The more I talk to people, live and online, the more I'm convinced there is an audience. I just have to find them. Looks like I've found a few of them here!

I adore the old Western movies, but some of my favorites are Clint Eastwood's Outlaw Josey Wales, Lonesome Dove, Dances with Wolves, True Grit (the most current version with Jeff Bridges), anything with Jimmy Stewart. Love Jodi Thomas and her Texas stories, Catherine Anderson, Kaki Warner, Lorraine Heath, Linda Lael Miller of course, as well as Johanna Lindsey and Julie Garwood (pretty much everything they write), and the list goes on and on.

I've really enjoyed reading my writing partner's stories. Jennifer Jakes and Jacqui Nelson are so talented and I'm so honored to be working with them.

Thanks for having me here! Ya'll are a great bunch!

Your covers are stunning! Great excerpt, too.

Enjoyed the excerpt, and that is one good-lookin' book cover!

Must admit, I love my cover. The guy who is on it, Harvey Gauden-Stables, is one of Kim Killion's hottest models. Only, you might not recognize him because on my cover she made him a blond! (He's got black hair and very dark beard.) I posted some pictures on my FB page (www.facebook.com/EEBurkeAuthor) from the Moonlight and Magnolias conference, where I met Harvey in person for the first time. Got pictures with him. He's just as handsome in person, and the nicest guy you could ever meet. Did a great Sam Elliott pose on the cover. I couldn't be happier.

Welcome EE! I like Western Historicals and even started to plot one some 25 years ago.

Even though I only did the research and wrote some preliminary scenes, I ended up sticking with my Romantic Suspense. What's so funny, I still remember some of those scenes and research materials, even though the hard copies were destroyed years ago.

I LOVE your cover! Best wishes to many sales.

History does have so many tales! I love the cover and blurb! Thanks for sharing!

Thank you all for the comments and compliments. I do love history, and get most of my ideas as I do research.

For me, part of the fun is taking real events and historical characters and letting my fictional characters react to them. Makes the story seem so much more real to me.

I've really enjoyed reading all your comments and appreciate the chance to share my project. Don't forget about the promotion I'm running on my website. Would love for you to sign up. There's lots of opportunities to win.

we hope you enjoy your visit to the Plotting Princesses' Palace.

Congratulations to Melissa Keir who is the winner of EE Burke's giveaway!