I posted on Facebook a while back about how much I love maps. Not only are they great for research purposes, but I also love to stare at them for hours on end and imagine all the possibilities. I’ve been a map nerd pretty much all my life.

On a recent bookstore visit, I purchased a couple of maps for my current WIP, which is set in Hell’s Kitchen in New York City. I find I’m particularly fond of Knopf Mapguides with the fold out maps because you get a really good bird’s eye view of the city itself. Plus they have it sectioned off by areas so it makes it super handy when working in a small grid like I am. AND it’s small enough to fit into my purse so I carry it everywhere. 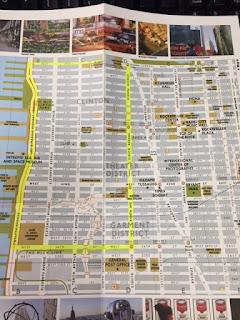 The really cool thing about the Knopf Mapguides is it lists “best of” places from restaurants to hotels to entertainment, as well as transportation for the city. There’s even an index of streets, monuments and places to visit in the back.


The highlighted box is the boundary of my world for this novel (and subsequent novels if there are any *wink*). And even though this isn’t my usual sort of worldbuilding where I build everything from the ground up, there is still some worldbuilding involved because I have to know where my people live, work and play. And sometimes have sex. *grin*

What I love about doing this is I can pinpoint exact areas and notate them on the map. I don’t know if you can see it, but I do have two places notated in pencil of where a major part of the story takes place as well as a secondary character’s home (which I’m thinking will come in handy for book two if there IS a book two and I’m thinking there probably will be. Ha).

For me, setting is one of the most crucial pieces I need to have in place before I start writing. Or at the very least shortly after I start writing. Deciding where to put the story is just as important as deciding who my characters are because oftentimes the setting itself can become a character, especially with a city like New York.

When I know my setting, I build the story around it and use things within that setting to create the type of world I need for the story. For instance, I wanted a grittier world for this story so it’s set in a nightclub in the middle of Hell’s Kitchen. It was fun doing research for clubs in that area of the city to see what I could model mine after (and mine is completely fictitious). It was also fun to think of the types of people who would populate this world and how they would interact with each other, where they lived and why.

I’ve used this technique before on my as-yet-unpublished urban fantasy which is largely set in Hong Kong. I purchased a Knofp Mapguide of Hong Kong and it became invaluable to me as I wrote the story and figured out how my main character navigated the city.

But I don’t just love maps for research purposes. I love them for other purposes, too. Like planning a vacation! When the husband and I traveled to the Black Hills one summer, we studied roadmaps to plan our route to and from. He navigated us there and I got us home and no, I didn’t get us lost. Even though we took two different routes through Nebraska and Kansas, they looked the same—lots of corn and hay. *grin*

What about you? Do you love maps?
Posted by Michelle Miles at 4:00 AM

Hi Michelle! Very interesting blog. I can honestly say I've never used a map while writing. Though I can see where it would be helpful, especially if you're writing about a place you've never been or a country you've always wanted to visit but haven't had the opportunity. I guess I'm just an armchair traveler. LOL

Best of luck with the new series (wink). Glad that you've found something like working with maps that helps with your writing process. I might have to think about adding that to my creative process and see if it adds an additional dimension to the story.

Hi, Michelle! I love maps too, especially the ones which note interesting things along the way, like grasslands or battle fought here. I need a good map. I'm checking out that brand right now.

Hi Kathy! Thanks for stopping by. :) When I'm writing about a city, I really need to know where I am when I move the characters around. So maps really help me to do that. I also love Google Earth.

Hi Vicki! I love these handy guides. They have them at B&N. I also purchased the Hong Kong one off Amazon. :)

Hi Michelle! Loved the blog! Yes, I'm a map girl. Dad taught me how to read one when I was a kid and let me navigate on vacations. It's come in handy as the years go by. But I've never used a map while writing. Maybe I should try! :)

Absolutely love maps. I hadn't thought about using a map for my writing, however. (Wish I'd used it for my series set in west L.A.) Even for a totally fictitious town or neighborhood, it might be cool to see where the different scenes play out in relation to each other. Great idea