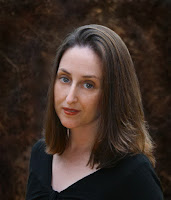 Zoe Forward is a hopeless romantic who can’t decide between paranormal and contemporary romance. So, she writes both. When she’s not typing at her laptop, she’s a small animal veterinarian caring for a wide range of furry creatures.

Speed Round:
Favorite movie: Toss up between: 12 Angry Men and Pirates of the Caribbean
Favorite book: I need a genre, please! I love so many.
Last book read: Adult book - Mercury Striking by Rebecca Zanetti;  Kids book- Finding Winnie: The True Story of the World’s Most Famous Bear by Lindsay Mattick
Favorite color: green
Stilettos or flipflops: flipflops
Coffee or tea: coffee
Ebook or paperback: ebook
Pencil or pen: pen
Favorite song: Hooked on a Feeling by Blue Swede
Streak or not: not
Favorite dessert: anything chocolate
Champagne or gin: champagne
Paranormal or Historical: Paranormal
Ginger or Mary Ann: Mary Ann
Favorite TV show: Top Chef
Hot or cold: hot
POV: third person
I'd die if I don't have: my family 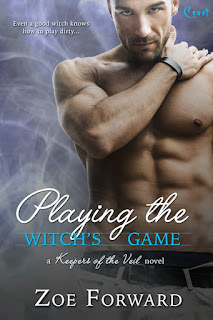 Even a good witch knows how to play dirty.

Excerpt from Playing the Witch’s Game:
“You want me to do what?” Nikolai’s mind stalled on her verbal bomb.
“I want to hire you.” Jen leaned against the kitchen counter, far too casual.
“You want me to pretend to be your boyfriend? On TV?” He stared into Jen’s wide-set blue-gray eyes and the grin of her generous mouth, a mouth he’d spent a lot of time contemplating, far more than he should have. Her brown hair was shorter, more professionally cut than last year. He missed her long locks, but the cut matured her in a good way. She was closer to thirty than the barely twenty-one vibe she projected.
“There’s this reality show I plan to audition for tomorrow. But it’s a couple’s show. Since I’m technically single at the moment I need you to pretend to be my boyfriend.”
He liked the thought of her not having a boyfriend, but not this scenario. “On television? Which TV show?”
“Extreme Survivor.”
A snort escaped him. She had to be messing with him. Her eyes narrowed in warning.
Oh shit, the woman wasn’t kidding. “You want to go on Extreme Survivor? You, the art museum PR coordinator?”
“Well, I figure with you I’d have a better chance of getting through a few days.”
“You couldn’t have formulated this plan more than about fifteen minutes ago. You can’t be serious.”
Her eyes widened with momentary fear, but her back stiffened and her shoulders went rigid. She gave him a confirmation nod. Respect and admiration for her rose. She recognized the dangers, but something important pushed her.
He said, “I might be able to deal with the left field bullshit they toss the competitors on that show if I could get past it being television and un-reality. But you? You do realize you can’t wear stilettos on that show.” Why was he even analyzing this juvenile scenario as a possibility?
“Oh, good. You’ve seen the show before. I do own other shoes.”
“They make you do crazy things on that show like climb mountains with your bare hands and no ropes, or swim across the rapids of a half-mile-wide river that’s infested with piranhas. There might be snakes and spiders. You might even have to eat them.” He chuckled when her face paled.
She notched her chin up. “Can you make them taste good?”
Laughter bubbled from deep down in a release of tension he hadn’t experienced in a long time. Actually, he hadn’t laughed this hard since he last tangled with Jen. He shook his head. “No. Nothing makes them taste good when you’re in the middle of nowhere. I’m not a covert ops soldier or a survivalist. We can’t be on national television.”
Find Zoe Forward at: Website - http://www.zoeforward.com
Find PLAYING THE WITCH’S GAME at:  Choose your favorite vendor here - http://www.entangledpublishing.com/playing-the-witchs-game/

Hi, Zoe and welcome to the PP. 12 Angry Men is a fabulous movie. Good choice and congratulations on your book.

Sounds really interesting (the book). I wish you the very best with it!

This sounds like such a fun premise! I can't imagine doing something like Extreme Survivor, I'd be out in the first 5 minutes. LOL

Best of lukc with the new book and thank's for visiting with the Princesses.

Hi Zoe! Your book sounds like a lot of fun! I don't think I could do Extreme Survivor, no bug eating for me! :) Best wishes for lots of sales!!