Cowboys Are Better Than Navy SEALS 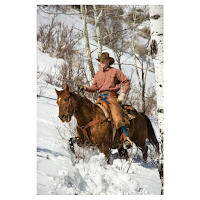 Last month at the Lori Foster Readers and Authors Get Together, Sharon Hamilton and I wrangled over whether or not Cowboys or SEALS are better. Even a very cute young man took my side and told Sharon that were better than SEALS. Then two weeks later I see Sharon had written a blog at Happy Ever After Blog listing the top 10 reasons why a Navy SEAL is better than a cowboy.

She’s thrown down the gauntlet and the game is onso just for fun, here are my 10 reasons why a Cowboy is better than a Navy SEAL:

10) of leather and horse and a manly scent that makes you go Seals they’re all wet.

9) Cowboy hats shade their face and make them look mysterious. When a man tilts his head a certain way, you can’t see his eyes or know what he’s thinking.
8) Who needs to jump out of an airplane when you can ride like the wind on the back of your favorite steed.
7) Cowboys don’t need all that fancy equipment that SEALS use. They are independent, strong men who use only what nature provides and their trusty six-shooter to save the day.
6. Some Cowboys wear boots made from swamp things, but the historical Cowboy boots were made from leather that protected him from rattlesnakes.
5. SWCC boat? Why would a Cowboy make his horse endure getting on a boat? But he can ride across a desert, swim a stream or climb a mountain.
4. Tats? Historical Cowboys didn’t need tats? Contemporary Cowboys they can have tats, but it doesn’t distract or make them into the strong men they are. They don’t need a badge to show their bravery. It’s all in their walk.
3. If there’s trouble on his ranch  or someone is trying to steal his woman, he’s there to protect her. He takes care of his family and the people he cares about.
2. There are no secrets with . are sworn to secrecy.

And the No. 1 reason a Cowboy is better than a NAVY SEAL —A Cowboy can become a Navy SEAL if he chooses that lifestyle.

Navy SEALS are fabulous men, great heroes, but they’re in constant danger and gone from home a lot. Cowboys are at home protecting and nurturing and caring for their ranch and family.

So, Sharon Hamilton, Author of the Band of Bachelors, this is why are better than Navy SEALS. Still, I would highly recommend you check out Sharon’s Navy SEALS, they are great heroes and wonderful stories.

If you’re looking for a CowboyA quick read, I just released Ace’s Bride in Debra Holland’s Kindle World. Ace became one of my favorite heroes, because he’s such a sweet, gentle, yet strong hero. And yes, he’s a Cowboy.

The Past Collides With the Future Creating Mail-Order Bride Sparks

After being gone for years, Mick ‘Ace’ Anderson ordered himself a mail-order bride and returned home to Morgan’s Crossing, Montana. But everything has changed at home. son for ordering himself a bride is dead, his brother and father have both remarried and Mick is hiding his alter ego, Ace, the gambler from his family. If things couldn’t get worse, his mail-order bride is right out of the past he’s trying to keep hidden.

Emily Black, or Lady Melody as she’s known in the saloon, is running from a much too ambitious fan who wants to make her his own caged singing bird. Realizing the only way to escape her over zealous suitor is to become unavailable, she signs up with a mail-order bride agency. But imagine her surprise when the man who lifts the veil at her wedding is non other than the attractive gambler in the saloon where Lady Melody sang.

Hiding from the past, can Mick and Emily fresh or will the demons from the River Bottom Saloon follow them to Montana? And can the attraction they denied in Kansas City overcome their distrust and bring them together forever?

Available on Amazon Only Tomorrow!!
Posted by Sylvia at 2:00 AM

Whoa, Sylvia! What a throw down!!! And love your reasoning Cowboys can be SEALS if they want. Congratulations on your story.

LOL, Sylvia. You are too fun. I love teasing you too!! Great job on throwing down the gauntlet. My newest, which comes out Monday, Nashville SEAL: Jameson, is about a SEAL who plays a guitar and wears a hat. He's probably the closest I'll write to a cowboy. But he's a SEAL.

Thanks for the shout out!!

Oh, and if you want to hear my narrator sing, like he used to as a Nashville star, here it is!!

Marvellous post. I've read all Sharon's SEALs and love them all but, I do have a very soft spot for a cowboy.

Sharon,
I had a great time at Lori Foster's readers event teasing you about Navy Seals vs Cowboys. It was fun. Now I've got to go check out the youtube video. Next time you and Geri go to the "Museum" you're going to have to let me know. That sounded like a hoot.

Hi Julie,
Seals are pretty darn hot, but there is something to be said for cowboys as well. Think of those tight wranglers and all those muscles from lifting hay. Yes, I do like a good cowboy.

Tcarle,
Hahaha!! Both of them are hot and great men...but cowboys are near and dear to my heart.