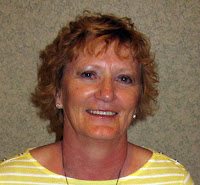 Please give a warm welcome to our guest princess, Tina Susedik!

Speed Round (one word only answer):
Favorite movie:
Favorite book: A Knight in Shining Armor
Last book read: Missing : The Lady Said No by Jacquie Biggar
Favorite color: Yellow
Stilettos or flipflops: flipflops
Coffee or tea: tea
Ebook or paperback: Both
Pencil or pen:Both
Favorite song: Thank You by Led Zepplin
Streak or not: Not
Favorite dessert: Chocolate
Champagne or gin: Champagne
Paranormal or Historical: Historical
Ginger or Mary Ann: Mary Ann
Favorite TV show: None
Hot or cold: Hot
POV: Third
I'd die if I don't have: Wear a bra

One Line Blurb:
Can Sarah and Jack survive dogs and puppies, wind and rain storms, Indians and unfavorable fellow passengers while their love blossoms on the Oregon Trail?

1000 Word Excerpt from The Trail to Love:
Cold seeped into his bones. Something warm blew across his face and ears. Jack swatted at his ears and peeled one gritty eye open.
"Papaya!" He pushed at the horse's nose. "Go away." Papaya continued prodding at him. "Damn horse." He rubbed his cold hands together.
In the dim light, he wasn't sure if it was morning or evening. The previous day's events came back to him. He sat up and wiped a hand over his stubbly chin. Tears burned behind his eyes.
Papaya tugged at his sleeve until the only thing he could do was stand. "Dammit, horse, leave me alone." He pushed the horse to the side. The sun rising behind the mountains from the east cast a shadow on a tree Jack swore hadn't been there the night before.
Standing at least twenty feet high, the trunk was twisted and gnarled like the arthritic hands of his grandfather. Several roots rose from the ground making it look as if it would walk away. Some of its massive branches drooped close to the ground, like arms dragging across the grass.
As the sky lightened, he realized that, unlike the rough bark of the pines at this altitude, the tree's light brown bark was smooth. Was it the lighting, or did some of the bark actually seem golden while in other places it was rough and dark brown? The surrounding trees paled in comparison.
Jack stepped closer. Pale green, oval leaves reminded him of an elm tree, only much smaller. When the wind blew, the undersides shimmered with a silvery glow.
Had he been so distraught yesterday he'd missed the massive structure? The tree seemed to beckon, calling him to its embrace. He dipped beneath its branches.
His hand shook as he reached out to touch the trunk. The instant he came in contact, his icy fingers warmed. Then his arm. He tried to pull away, but he couldn't move.
Warmth spread through his body then settled in his aching heart. Was he hallucinating or was the tree humming? Had the tree actually whispered, "Love will come."
A calmness settled over him and the darkness of the past few days diminished.
Between the hanging branches a person, surrounded by a foggy haze, appeared. Actually, two people. One tall, the other waist high, with a smaller version of Jack's hat on its head. Suspenders held up too-short pants over the little one's plaid shirt. A woman and a boy? They held hands, swinging them back and forth as if they hadn't a care in the world. The woman's bonnet hung down her back, loose hair flowing to her waist.
Was the tree showing him what Lily and his child would have been like if they'd lived? His heartbeat pounded in his ears, and he swore his heart cracked. As quickly as the despair washed over him, the tree hummed again and his heart warmed and peace settled through him.
Then the woman looked over her shoulder. This wasn't Lily. The sun struck the vision. Instead of his wife's dark hair, this woman's shimmered like gold. Even from this distance, her sparkling blue eyes pierced through him.
Her smile beckoned him, and when she crooked her finger, all he could do was follow. The closer he came, the farther away they moved, until their bodies faded and nothing stood before him except the large boulder he'd slept against.
The tree. What if he touched the tree again? He pivoted on his foot, ready to run back and feel the twisted branches. What the hell? Maybe he'd lost his bearings while chasing the woman and boy. He spun in each direction. Nothing. The tree was gone. Poof. Was he losing his mind and dreaming the whole incident?
Something light brown on the ground caught his eye. Jack picked it up, his fingers warming at its touch. Bark from the disappearing tree? Had it all been real after all? If so, then where had the woman and boy gone?
Jack retraced the steps he'd taken to follow them. Only his own impressions in the dirt showed. He was going crazy. That was it. Crazy from grief. Maybe what he needed was to get away from the land and the memories it held.
Papaya pushed against Jack's back, nearly knocking him to the ground.
"What do you think, old boy?" He ran his hand over the horse's soft nose and recalled Samuel Hunt's offer of a job from before he’d married Lily. "Should I see if Sam still needs someone to help take those crazy emigrants to Oregon?"
As if he understood what Jack was saying, Papaya nodded his large head.
"Well, since I'm already crazy, I might as well listen to you."
After a quick breakfast of cold biscuits and hard tack, he swung onto Papaya's back and headed back down the mountain. Back to his empty home and future.

Welcome to the blog today, Tina! Your book sounds so interesting!

welcome to the princesses! Thanks for sharing !

Welcome to the Princesses, Tina. Great excerpt. I'm a flipflop girl too!

Welcome to the Princesses. Hope you've got your tiara on. Loved the excerpt, and great answers to the speed round. Wishing you many sales.

Welcome Tina! I loved the excerpt! Very intriguing. Best wishes for many sales!!

I'm dying over here because you can't live without a bra. Thanks for visiting with us today!