A while back, I told a girlfriend I was in a rut. I wanted to do some new things. Here's some ideas we explored:

But when this one caught my eye, I was all over it in a heartbeat. Cheesemaking 101.


The only thing I knew about cheese is eating it. But this store and the founder has a world-wide reputation. The Julia visited here. The cheese is served on American and Virgin airlines. The best restaurants use it.


The company is located in a reviving area of town. Part of the 100 year-old tile floor is in the entry. We signed our names, got aprons, hairnets, washed hands. The class, led by the founder and owner, started with the company's history. Then, we toured the facility with her describing the various cheeses in the cooler.


It all began with milk poured in a double boiler. The class cut in half lots and lots of lemons. Using a reamer, we got out the juice which was strained and poured into the double boiler. A few minutes later and some stirring--abracadabra--we had ricotta.


I'm not kidding. It was like magic.
After the ricotta was scooped and stowed in containers, we were showed three kinds of mozzarella which began with mozzarella curds-- balls, string cheese, and olive loaf. 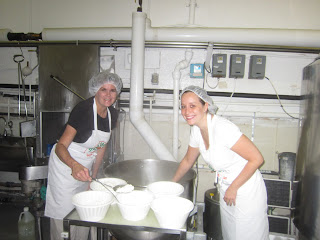 We chopped the curd, kneaded it into bits, added hot water, strained and pulled the cheese as she had. Afterwards, the class participated in a wine and cheese tasting. We took home our goodies, too.


I had a blast getting out of my rut and expanding in this way.

What are you doing that's new and interesting? Want to try Plumbing 101 with me?

Vicki Batman is ensconced in her wheelie chair with a diet Coke and her ancient napping cat. Find Vicki at: http://vickibatman.blogspot.com Or at: http://plottingprincesses.blogspot.com. Her latest and greatest is San Diego or Bust: http://museituppublishing.com

Plumbing 101 -- No way! I hate the idea of crawling under sinks etc. But the cheese making sounds like fun. What a fun class.

Plumbing 101 -- No way! I hate the idea of crawling under sinks etc. But the cheese making sounds like fun. What a fun class.

Hi, Sylvia! It was fun. I think I'll try the basic plumbing one day too. Plumbers can be hunky!

I had the cheese-making itch and got a kit for christmas. A kit that still sits unopened.
You've inspired me! But I'll steer clear of that plumbing.
Great post.
Sharon Struth

Hi, Sharon! This class was so awesome. Everything set in place and we followed the directions and yeah! Cheese. The ricotta seemed to be the easiest to make. I think the plumbing could be interesting. Course I should have done this a long time ago. LOL. Thanks for posting.

I remember going through PA Amish country and stopping to watch cheese be made - not only fascinating with the huge vats, but delicious!

Very cool post, Vicki. I never ever knew one could make cheese like that in a class setting. Wow.
But, sorry, no - I do not like anything plumbing, especially toilets and sinks. AACK! I leave that to my husband.
Years ago my counselor told me I had to get "out there" and get a hobby. That's when I took my first horse riding lesson and we all know became of that.
Now I am sooo grateful to her for suggesting I get out of the mommy rut and do something for ME.
Patti

Hi, Chris! Watching the Amish make cheese would be cool and I'm guessing it is a different kind from what I did. However, I subscribe to ending every meal with chocolate instead of the cheese. lol

Hi, Patti! We should all have time for me. I think that makes a whole person. I've always been a huge reader and done needlework. I've seen your baby and he is gorgeous. Someday, I'd like to pet him too. ox

How much fun! I have a friend that is into cheese-making and it is very complicated. But wow, does she make good cheese! And where did you find a class for plumbing 101? Sounds rather fun, but my hubby might expect me to do all the plumbing fixes around the house. :)

Hi, Karilyn! This cheese class wasn't complicated. They had the hard stuff done. I saw the Plumbing 101 class in the paper, but was out of town when it was held. I'm looking for it to show again. Thanks, gf!

This likes fun! I've thought of taking a cooking class before. Maybe I should get off my duff and do it. :) Getting out in the world makes for a more creative writer. Thanks for sharing.

Hi, Sharla! It was fun, except for the hairnet part. LOL. And exactly, as a writer, I can't hibernate because as a person there's a lot in the big wide world to explore. By exploring it, our brain in spurred creatively and possibly, something will hit the page. Maybe a word, maybe a phrase,and if lucky, maybe a whole book. Thanks for posting.

I NEED to learn plumbing, but eating cheese with wine sounds more appealing. Love your ideas on ways to get out of a rut!

Vicki, you crack me up! This picture of you is priceless.
Only you! You're just like your heroines in your stories: funny and adventurous!

I am sure that on https://fivebestvpn.com/ you can get useful tips on using VPN. It means a lot these day