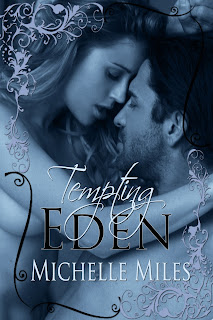 To celebrate today's release, I'm giving away one eBook copy to a lucky commenter so be sure to stick around to the end of the post.

Eden doubts a trip to the Bahamas will make her forget her cheating boyfriend, empty bank account and dead-end job. But when her best friend insists the trip is what she needs to forget her troubles, Eden can’t refuse the all-expenses paid vacation. Little does she know a new kind of trouble awaits.

As an elite Guardian of Atlantis, Sabre is on a mission to bring back human females from the surface. The lost continent’s lead geneticist wants to impregnate the women, mixing Atlantean DNA with human genetic material in order to save their dying race. If Sabre refuses, his sister will be killed. Despite his revulsion to such a mission he has no choice but to obey.

When Sabre walks out of the sea and finds Eden on the beach, he can read her deepest fantasies loud and clear. At first it’s enough to simply bring them to life, touching her to ecstasies she’s never before experienced. But when his heart falls under her spell he knows he can’t take her back to the scientists and a life as a guinea pig. He intends to keep her for himself…no matter the price.

Sabre knocked on Helene’s door and waited for her to grant him entrance. When she didn’t he pushed it open and peered into the small confines of her apartment. In the darkness he could see shapes of her furniture strategically placed in her home. She was meticulous in her décor and he knew there wouldn’t be as much as a speck of dust on anything. He could see sunlight slashing through the cobalt waters beyond the floor-to-ceiling windows and fish swimming by as though they had not a care in the world.

Stepping inside, he closed the door and listened in the silence for some hint of life.

No answer. He flipped on a light to chase away the shadows and scanned the room. Everything was in its place. The sofa sitting atop the handmade Atlantean rug, the modern art on the walls and the heavy wood coffee table and end tables. Yet there was no sign of his sister.

Her bedroom door opened but still she did not emerge. She knew he was there, opened the door to let him know where she was yet didn’t come out to greet him. Balling his fists, he charged toward her bedroom…and stopped short in the entrance.

His baby sister was curled on her side on the bed with her knees drawn up to her chest. Her eyes were closed and her dark hair was fanned out on the pillow behind her. A stabbing pain slashed through his heart.

“I don’t need you to check on me, Sabre.” Her voice was cold, unfeeling. Desolate.

He paused, not sure how to proceed. He knew she was hurting. He knew she was devastated. He also knew she would survive. She had to. She was all the family he had left. He couldn’t bear the thought of losing her too.

He didn’t want to ask about how she was feeling—he knew the answer. He also didn’t want to tell her he wanted to make sure she was all right—that would cause her more pain. She’d lost her child after all. She’d been angry and depressed since.

He’d talk to her about something else.

“I’ve been called to a special meeting with General Bastian,” he said.

“So?” She never opened her eyes. Never looked at him.

“It’s also a meeting with the president. Top secret.” That got her attention and she finally blinked open her eyes. He pressed on. “General Bastian thinks it’s about what’s happening.”

“What’s happening? You talk as though it’s nothing to be concerned about,” she snapped. “Do they even really care, Sabre?”

She sat up, her chocolate locks falling around her face. Her thin, gaunt face. He could see the shadows under her eyes and her sunken cheeks and it pained him. She was not the lively young woman of their youth he remembered. The one who looked up to him as her hero. The one who used to tease him about his fascination with humans. It was why he joined the Guardians and why he worked so hard to become General Bastian’s second-in-command.

Why he wanted to keep her safe and make sure nothing ever happened to her.

“Yes, they do. And they are concerned. That’s why they’re going to do something about it.”

“What can they do? We’re a dying race and everyone knows it.” She clutched the blanket tighter around her shoulders, shivered and laid back down. Her back was to him as though she’d shut him out already.

Sabre feared their world—the one they’d so carefully built over the last few centuries—was coming to an end. He’d known it was bad—he’d experienced it firsthand when his sister miscarried. Her husband, devastated by the loss, committed suicide. The losses had been so hard on her she’d fallen into a deep depression. One he couldn’t get her out of.

But their tragedy wasn’t unique. The women of Atlantis could seldom conceive and if they could, like his sister, they couldn’t carry the babies to term. Atlantean geneticists had determined their race had become too small for them to survive. Even his general wasn’t immune to the tragedy. His wife had lost their child.

Leave a comment and enter to win! Deadline to enter is midnight CT tonight! I'll randomly draw a winner and will notify you by email so be sure to leave your email address in the comment!
Posted by Michelle Miles at 5:00 AM

Congrats Michelle! Super excited for you.

Yikes, I can't believe I didn't stop here yesterday. I sorta have a great excuse? lol

Congratulations, sweetie, on the book. The cover is awesome and I can't wait to read because you are the most excellent writer. oxoxo

LOL no problem, Vicki :) And thank you! You're awesome :)