Release Day for VEXED: The Haunting of Castle Keyvnor: "Between the Devil & the Deep Blue Sea" by Elizabeth Essex

Greetings and salutations to the Princesses!

I hope you'll join me in celebrating the release day of VEXED: A Haunting of Castle Keyvnor, A Regency Romance Collection of twelve inter-related stories. My contribution to this brilliantly collaborative effort is the novella “Between the Devil & the Deep Blue Sea.”

The collection consists of four volumes: VEXED, BEDEVILED, MYSTIFIED & SPELLBOUND, and each volume contains three meaty novellas all unified by a central theme: the protagonists have all gathered at Castle Keyvnor in the Cornish town of Bocka Morrow to hear the reading of the late Earl of Banfield’s will.

Now with twelve different authors, you can be assured that there are twelve unique voices telling the stories, but we worked hard to keep our plots interrelated, so that different characters interact with each other and exist in the same physical place—the haunted Castle Keyvnor.

My story doesn’t dwell on ghosts and haunting, but deals with the powerful magic of love, and its consequences. At the start of “Between the Devil & the Deep Blue Sea” my heroine, Nessa Teague has never believed in the power of magic. She’s never taken part in the charming but ancient local festivals. Until Captain Lord Harry Beck comes back to Bocka Morrow after years away in the Royal Navy, and she realizes that there is nothing she won’t do to have him for her own true love. Nothing. Not even magic.

Harry Beck has left the Royal Navy only to find himself shoaled upon the rocky coast of Cornwall, where smugglers haunt every cove and treachery fouls the waters. His best hope to find the traitor selling secrets to the French is to charm the vicar’s observant and intelligent daughter, Nessa Teague.

But in a place where loyalty runs deeper than the deep blue sea, they’ll need more than charm to uncover the secret plot that threatens their country, and shakes their faith in the power and magic of true love. 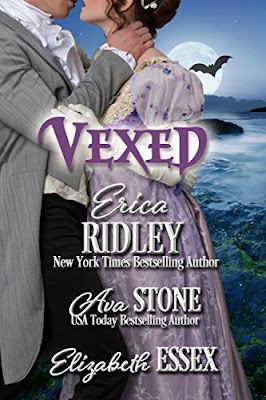 October 1811
At the Feast of Saint Allan in the tiny village of Bocka Morrow, it was said a girl could bewitch a man into loving her with one bite of a polished Allantide apple. Nessa Teague, being the daughter of the Rector of Saint David’s Church, and a quiet, dutiful sort of girl who never gave her parents a moment of worry, had never tried to bewitch anyone. Never picked or polished an Allantide apple. Never taken any part in the charming but heathen tradition.
She had simply never believed in the power of enchantment.
But that was before her Harry had come back. After twelve long years, during which Nessa had pined and longed and never once forgotten even a single moment she had spent in his company, Captain Lord Harry Beck had come back to Bocka Morrow.
And there was nothing, absolutely nothing, Nessa Teague might not do to have him.
“Gracious!” whispered her mother, drawing Nessa close to prevent her from greeting the slow-walking, tall man in weather-beaten blue. “What does a king’s officer think he’s doing in Bocka Morrow, walking about the village as bold as you please? He’s like to have his throat cut.”
“He’s not a Revenue man, Mama.” Nessa kept her voice low in the vain hope that her mother would do the same. “He’s Royal Navy, can’t you see? It’s Captain Beck. He’s come back.”
“Lord Henry Beck?” Her mother shaded her eyes to take a second look at the man making his slow way up the narrow village street. “I’d never have recognized him. He looks…”
Magnificent. Heroic. Hurt.
“…far older than he ought. If, indeed, that is Lord Henry.” Mama dropped her hand along with her regard. “He’s nothing to his brothers, certainly. I saw the young Viscount Redgrave with the marquess, in his carriage on his way up to Caste Keyvnor. Fine figure of a young man.”
Aye. Nessa could not take her eyes from him, afraid he might disappear for another twelve years. Afraid she might blink and find he were nothing more than a shadow on the surface of the sea—another ardent, imagined daydream. “He’s been injured, Mama.”
“Viscount Redgrave?”
“No. Captain Beck. In the Battle of Lissa, last spring.” Nessa had kept track of him as best she could from her backward, hidebound village on the frayed coast of Cornwall. “And again, in another action in which his 36-gun frigate, the Lively, took two French fifth rates of 40 guns.”
“Gracious, Nessa!” Mama tutted. “I don’t like this talk of ships and guns.” Her mother’s tone said what her words did not—that ships and guns were not a suitable topic of conversation for respectable young ladies. As if they did not live in Cornwall where the sea, its bounty, its opportunities, and, most importantly, its ships, were not of certain concern to all. “Wherever have you been hearing such tales?”
Nessa heard tales of Lord Harry everywhere—she only had to listen. The fisherfolk along the quay talked, the newspapers that came from Truro celebrated, and the publican at the Crown & Anchor gossiped. “He’s a hero.”
“Well, I suppose he ought to be, for his family’s sake, if nothing else, since he’s the Marquess of Halesworth’s spare.” Her mama turned the corner sharply, hauling Nessa along with her. “But he’s nothing to us anymore.”
Nothing to Nessa, she meant.
And Nessa could be nothing to him. Because she was nothing but a local rector’s middle daughter, who had been the unlucky age of thirteen years old when Lord Harry had left her father’s tutelage and gone off to the Royal Navy. She was just a nobody, who wasn’t supposed to gossip, wasn’t supposed to read the newspaper, and wasn’t supposed to pine after a man so far out of her reach as the Marquess of Halesworth’s spare for twelve long, lonely, unrequited years.


And she certainly wasn’t supposed to polish up an Allantide apple with the single-minded intention of enchanting Lord Harry Beck into discovering that she, Nessa Teague, was his one and only truest love.

What is the most outrageous thing (or things!) you've ever done to secure your one true love?
Wishing you all Happy Reading!!!! Cheers, EE
Posted by Unknown at 6:58 AM

Good morning, Ms. Essex, and congratulations on the anthology. I can't wait to dive in and read more because you know I love your work. Hugs.

Thank you so much, Vicki!! This is a return to familiar themes (duty v. desire) and familiar heroes, with my young Royal Navy Captain Harry Beck. He's just our favorite sort of stalwart but romantic fellow!!!

Wishing you happy resting my dear!

Well, Ms. Essex, apparently none of my shenanigans did the trick, because I'm still very much single. LOL

Congratulations on the new release! Can't wait to dive into it. Sounds like just my cup of tea, to cuddle up with your book, my comfy chair, and a cuppa beside me. Add in a touch of magi and castles, and I am ready to dive in. Best wishes for many sales.

Thanks, Kathy! Wishing you a lovely afternoon with a comfy chair, a hot pot of tea and Captain Harry Beck. ;)

(And only one of my shenanigans ever did anything—but it involved moving to Ireland for a while, which was great fun, even if it hadn't worked!!!)

Thanks for the book love!

Do you want to know more about buying term paper? Here you can find useful info about it