Release Day: In the Tower of the Wizard King by Michelle Miles 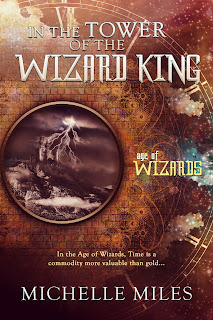 IT'S RELEASE DAY!
I'm so excited to get this book out and in the hands of readers. It's available in print or eBook and coming soon to audio. Below is the blurb, an excerpt and buy links!﻿

In the Age of Wizards, Time is a commodity more valuable than gold.

When Aoife (EE-fa) stumbles upon an antique trunk in the attic, it calls to her with an ancient magic. Inside she finds a stairway leading into darkness and cannot resist stepping onto that first stair. It leads her to dark truths her mother never wanted her to uncover and love so powerful she walks through time to save it.

Her magic is dormant.

When Aoife Burke rushes home after the unexpected death of her father, she discovers her mother has vanished amidst inexplicable circumstances. She returns to her childhood home to search for clues of her mother’s whereabouts but another shock awaits her. Sean O’Connell, the object of her girlhood crush, has purchased the family home. She senses Sean is hiding something from her, refuses to let her inside and does everything he can to keep her out. A determined Aoife breaks inside and stumbles upon an antique trunk in the attic. When she opens it, instead of the normal musty clothes and ancient letters, she finds a stairway leading into darkness. It calls to her and she cannot resist stepping into the trunk and onto that first stair where it leads her to magical truths her mother never wanted her to discover.

His magic is dangerous.

Sean O’Connell has been assigned by the Inter-dimensional Portal Protection Agency to keep Aoife and her mother out of Faery. But when she breaks into the house and disappears through the portal in the trunk—like her mother—he has no choice but to follow her, even though stepping into Faery will force him to face his past. Keeping her safe and out of the hands of the Wizard King also becomes a fight to save Aoife’s life from her own mother, who has discovered a time portal in Faery leading her back in time to alter her past mistakes, putting Aoife’s life in peril. Sean is willing to do anything to make sure she’s safe. Even if it means he has to tap into his dangerous magic to do it.

Present Day in the Human Realm

An incessant buzzing pulled Aoife Burke out of a dreamy, heavenly sleep. Her hand fumbled on the nightstand trying to silence the thing when a pillow crashed against her face, jarring her from half-asleep to fully awake.

Still groggy and trying to wipe the sleep from her eyes, Aoife dropped the pillow to the floor and yanked the cell phone off the charger as it stopped buzzing. When the small screen lit up, she had four missed calls. All from her mother.

Her mother never called her, so to have four missed calls meant something terrible had happened.

She snapped to a sitting position, her fingers fumbling on the screen as she tried to get to the missed calls screen when it started to buzz again. She swiped the screen and answered.

“Aoife, there you are at last. I’ve called to let you know that your father passed away.” Fiona’s even tone held no emotion whatsoever.

Aoife blinked, a sudden sickness piercing through her gut as her hand tightened on the phone. She hiccupped a breath and forced her mind to remember to inhale, exhale. “What do you mean he passed away? He’s dead?”

Instant regret and guilt poured through her. She’d skipped going home for Christmas three months prior because she couldn’t stand the thought of her mother giving her a frosty reception. When Aoife turned thirteen, her relationship with Fiona underwent a drastic change, something Aoife had never understood.

Her parents’ marriage had been rocky for a while too, but Aoife naively thought despite all that, they would always be together. Tears pooled in Aoife’s eyes as she clutched the phone and gulped in air, desperate for breath. Her roommate, Jenna, moved to perch on the edge of the bed, putting a comforting arm around her shoulders.

“I’m sorry to have to break the news to you this way, but there’s no time, really.” Fiona sniffed so quiet Aoife almost missed it. “Your sister is in Shanghai filming a movie but I called to let her know. I thought you needed to know, too.”

But the line went dead.

Sounds so interesting! I have only read the blurb text and I already see this book turned into a movie or even my favorite genre - anime. Congratulations!

Hi Michelle! Wow, I am sure this book is very interesting I want to read it. If you like reading you can check response paper on our webpage. Exclusive-Paper is a leading writing service, the professionals of which are always ready to write any other kind of academic papers writing.