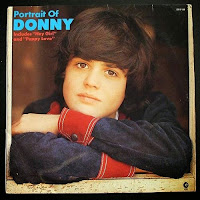 I was thinking about crushes the other day, and happened to think I covered a lot of firsts with my own first crush, Donny Osmond.  He was my first crush, my first poster on the wall, my first record album (yes, I’m old), my first concert, my first fan club.  I even had the requisite purple socks with his face on them, all the record albums (still have them, in fact), the Donny & Marie dolls, and the concert posters.

He’s come a long way from the young boy on Andy Williams show. He’s a husband, a father, a grandfather (how’d that happen?), a man of very strong faith, and he continues to entertain fans of all ages.  I still love his music, and I want to go to Las Vegas for the Donny & Marie concerts there.

I graduated from pop star to actor with Vincent Van Patten in 1974 when he played the son on Apple’s Way.  Imagine my surprise several years ago when I caught him announcing some world of poker show.  Only problem with that show is there wasn’t enough face time!

My junior year in high school was a huge change for me. My sister and I moved to Missouri from Texas to live with my dad and his new family.  I was miserable not knowing anyone…until I met the boy across the street.  He was my first friend, and so cute! Well, my idea of cute: redneck, worn jeans, beard, and beat-up baseball cap.  We were always friends, nothing more, but I still crushed on him.

Then, in college, I had a crush on the guy who delivered merchandise at my summer job.  And I crushed hard.  We ended up opening one of the new kiosks for the company, so it was close quarters, and we talked a lot.  I was dying for him to ask me out, but it wasn’t until his last day, before he left for the military, that he asked me out for pizza in the mall.  I wore a red shirt, and I swear my face was the same color because I was so excited and happy.  He left for Colorado, and we stayed in contact by writing long letters. 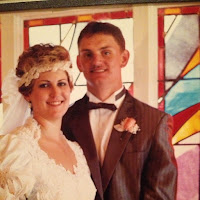 We fell in love through those letters.  A year later he transferred to Missouri, a couple of hours away from where I attended college, and three months after that we were engaged.

We’ve been married almost twenty-seven years now, and I still crush on him.

When I write, I think back over the years to those puppy loves and my first love for my husband, and use those emotions to enrich my characters when they meet The One.


How about you? Who was your first crush?
Posted by Allison at 3:30 AM

Like you, Donny Osmond was really my first crush (although my first concert was Bobby Sherman...another cutie!). I was going to marry him. I DID marry a Don, but not the one I was going to as a kid, LOL! Great story about your crushes! I could not stand my husband when we first met, haha! He was (is) a typical Leo...arrogant and obnoxious...but he grew on me I guess because in July we will be celebrating 32 years of marriage! I don't know how I would have gotten through the past few years without him!

What a lovely remembrance of past loves. When they tell you to "write what you know," this is one example of what is meant. Remember those emotions and put them into your characters. Great post!

Love this, Sloane! I didn't have music or tv crushes. I occasionally liked someone at school, but confess? Never. I dated a lot in singledom. Handsome was pretty funny for a while and then everyone said I should date him. So I did.

Hey I met Donny when I was in college at BYU. In fact I was covered in clay and dashing into the administration building to buy more clay for my ceramics class and I ran smack into him.
Very embarrassing. I should've looked where I was going.

What a cute post! I love the pix of you and your hubby! I too liked Donny Osmond on the Donny & Marie show. But idiot me thought they were married instead of brother and sister. LOL!

My first true crush was Elvis Presley. of course I was young and naive, but there was something about that dark hair and blue eyes that was just swoon-worthy! And he could sing, too! He was the total package. LOL Bobby Sherman too.

Wow, what a great post, it really makes you think about those earlier years and the guys who shaped who you were attracted to as you matured.

By the way, I still love guys with dark hair and blue eyes, so I guess some things never change. LOL

Music for me was The Monkeys and my crush wavier from Davy to Mickey and back again. My TV crush was a handsome man on a SCI-FI show of the 60's called "Voyage to the Bottom of the Sea". David Hedison who played Captain Lee Crane was my hard fall crush. I was devastated that he married someone else and not me! I still follow the man - he is 82 years old and still looking good!

My second major TV crush was Tom Selleck. I was also sad when he married.

Oh well, I found my guy and I'm pretty cool with that.

Right there with you,, Phyllis. Davy Jones of the Monkees. Then the Mod Squad and Pete CHurnak. LOL. Fun memories.

I'm loving all these posts! Thank you all for responding.

Kat, I'm GREEN with envy! You ran into him - mud and all. Hilarious!

Cathy, I had to laugh out loud when you said you couldn't stand your husband at first.
Congratulations on almost-32 years! And you haven't killed each other yet.

Vicki, you are too funny.

Kathy - I, too, loved Elvis. But funniest thing - in his younger years, he looked so much like my dad...or actually, vice versa. Daddy looked like him when he had sideburns.

Phyllis,
I liked Davy best of the Monkees, too. And was so excited when he was on the Brady Bunch!

Pamela,
I haven't thought about the Mod Squad in ages. I used to love that show!

Karilyn, you're a hoot. I loved that show!
Thanks for visiting my post!

Enjoyed going down memory lane with you, Sloane. I guess my first crush was Dr. Kildare since I wanted to be a nurse. (I'm REALLY old!) And like you, I crushed on a new kid who started going to my high school his freshman year, then moved and returned at the beginning of my junior year. This year we will celebrate our 46th wedding anniversary.

I love seeing everyone's firsts. I's pretty revealing that my first crushes were similar (a Monkee) but offbeat. Not Davy or Mickey, but Mike, the tall, funny Texan. Clearly I had a type right from the start.

But second crush was on Michael Palin from Monty Python's flying Circus. Another funny man.

So that's how I like them in real life—the Indispensable Mr. Essex is a tall funny Texan—and my heroes are at their best when they show their sense of humor. :)