There were several Princesses in attendance. If you think this looks like a Where's Waldo drawing you would be right. There were thousands in attendance at the Giant Book Fair. Were you there? Can you find yourself in this crowd? Ha! Me, either. I can't find my own nose in a room that crowded.


Here's a closer but highly candid Where's the Princess photo. In this picture try to find Sylvia McDaniels, Kathleen Baldwin, and Chris Keniston. Oops! Chris stepped out of the photo. But she was there earlier. And so was Princess Liese Sherwood-Fabre. 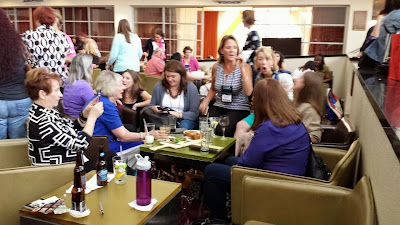 Fun was had by one and all. There was line dancing with the Steampunk crowd, bull riding with the western writers.

And silly selfies, like this one with me and author Patience Griffin. 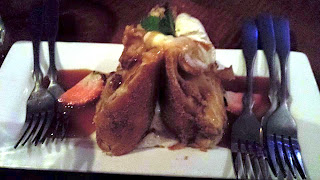 And eating! Lot's of eating.

Tasting of savory and sweet delights; such as Bacon lollipops at the Meddlesome Moth, and this delicious fried cheesecake, which Princess Sylvia shared with me and our pal, author Kay Thomas. Yum!! 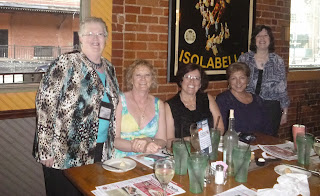 And here's Princess Phyllis at a scrumptious dinner with her editors and fellow authors at Soul Mate publishing.

On Saturday, we met readers, tons of readers. See top photo. We talked about our favorite stories and signed our books. Like my brand new release: A School for Unusual Girls, which New York Times Sunday Book Review said, "is enticing from the first sentence." They also said this... "Baldwin has an ear for period dialogue as she draws us into this world of sharp, smart young ladies who are actually being trained and deployed for the British war effort by the mysterious headmistress, Miss Stranje. It’s speculative historical fiction, with a trace of steampunk inventiveness..." And a bunch of other nice stuff.

So, I am a very happy Princess.
Princess Kathleen's new Historical YA series debuts today. To read more about it got to A School for Unusual Girls on Amazon.

If you were at RT tell us what you did there? Who you met? What you ate... Did you ride the bull? Line dance. (I tried line dancing, but I didn't know how. So author Angi Morgan coached me.)

Posted by Kathleen Baldwin at 12:50 AM

HUZZAH!!! It's here at last! I have been waiting very impatiently for your marvelous book to debut, and so has my sprig! She will gobble this delicious book up the moment she is done with her last final exam tomorrow!!!

And RT was a ton of fun, not only for the time spent with other authors, like you and the other Princesses, but especially for all the terrific time I got to spend with enthusiastic readers!

Congrats again on your most royal of releases. :)

Such a great time ! And so excited for the fabulous reviews for the new book! So deserving !

Kathy!
Can't wait to get my hands on your book! Will be reading it with great anticipation!

Best of luck with the launch!

KAT, what a wonderful post. Looks like you had a great times as did other Princesses. I popped in on Friday and enjoyed my time there as well.

Much congratulations to you on your release AND such good reviews! You so deserve all the good this book brings you as you worked so hard on it.

So sorry I missed seeing you at RT. I joined the group from the above photo on Friday night, apparently right after you left.

I've got my copy of your new book, and can't wait to jump in and read it. Congratulations on the new release, and I'm positive it's going to do splendidly.

Best of luck with your launch parties!

Hi Kat! Congrats on your release! I'm looking forward to reading it! Glad you had a good time at RT. I've never been, but it looks like everyone has fun at the conference.

Thank! Y'all are so sweet. You're the best friends a girl could have. Big Hugs and thank you for your encouragement and support. You all ROCK!

Ms Essex, you were EVERYWHERE at RT. I dub thee Queen of RT. How many workshops and panels were you on??? Lots!

So sorry I missed you Kathy!! Had dinner with my editor.
I wish I'd seen you Friday, too, Phyllis. Oh.. :-( I don't like that I missed seeing some of you. Pictures girls. Pictures! Add them into the post.

I did get to see Liese one night

Seriously, put pictures in the post. I didn't get a photo of Liese there but I remember some being taken.
:-)

Thanks Kat for adding my photo!

Really wish I'd been there with you all..

Excited for your release!