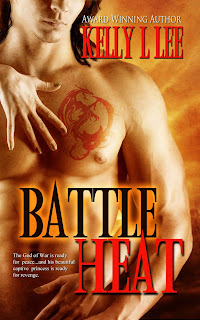 But here's the kicker. Both of these books have been released before with a different publisher, and I've got literally boxes of "old cover" swag, like bookmarks.
Here's the old cover bookmark for Battle Heat, of which I have, like, a thousand. They're similar, but not identical by any means. 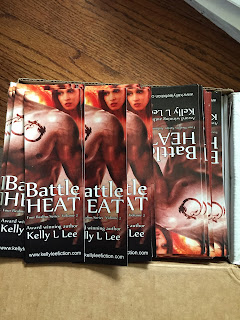 In today's environment, especially with indy-published novels, authors are freshening up their older tomes by repackaging and doing new covers, even though it's the same book.

So author friends, and distinguished readers, I would very much like your perspective.

1. Do you find it confusing when the same book gets a new cover, even if the title stays the same?
2. Does it bother you if the swag you may pick up somewhere, like a bookmark, contains slightly different art than what you see when you purchase or download the book?
3. What's the final verdict on my old swag.... do I chunk it in file 13 or keep it because, let's face it, there's a lot of chest muscle going on..

Holly Okeanos is alone, held against her will by the immortal that destroyed her people. Desperate for revenge, she vows to fight until her last breath to regain her freedom.
The beast inside Ares must feed. His family knows darkness lies within him and they equally fear and hate him for it, but he’s the first they call when the Olympus throne is threatened. He’s struggled to control the bloodlust since the dawn of time, but only carnage sates the monster within.
With an escalating rebellion and a resurrected Scarab to defeat, Ares doesn’t have time to deal with his infuriatingly beautiful captive, whose mere presence strangely calms the beast and settles his mind. She detests the very air he breathes, but he finds himself assailed by feelings that haven’t surfaced in over a millennia. Could Holly be the woman to finally quiet the beast inside him?

Hi, Kelly! You know your swag is similar to the book and I would keep it and use it. Giving something is better than nothing--right? But if you want to be safe, then redo. Good luck!

Thanks Vicki - Hope you have a great day

That is a very hard question. If they are remotely similar, then give them away....you are going to give them away anyway...to someone or to file 13, right? Sorry to be of no real help.

I just wanted to give you kudos for your hard work!

Hi Kelly! Congrats on your releases!!! I don't know about the swag. I am in a similar situation and mine is hiding in the drawer. My thought is that a reader would want what is out now. There might also be legal issues with the publishers. At the same time, you spent money on those things and want people to see them. Hmm... after thinking about it, my advice is to pitch the old swag. Recycle it. Or get creative and use it to make an ornament for your Christmas tree. :)

Thanks to everyone for your thoughts.... I decided to give mine out. I don't have any legal issues, because my old publisher relinquished rights to the artwork, and the artist released to me as well.

But when I say "give out", I mean more like ... leave them scattered on tables at bookstores and airports. If it nets me a single sale, that's better than File 13.