Not every job has had work mates become a tribe, but one dear to my heart is one I became a part of at an insurance company. I joined the support department, and we were the ones everyone turned to for a variety of tasks. That was a fun tribe and I'm still friends with several of those inmates...er, tribal members.

My husband and I moved to Tampa in 1999, and my tribe shrank to 4 ppl (and two cats): hubby, one of my insurance company tribal mates and her husband who happened to move there right before us. I still cherish our friendship with Steve and Debra. They were an important, stable, familiar tribe as we navigated new waters in a strange, humid city.

My next tribe was formed when I was hired as the executive assistant to the General Manager at the new Neiman Marcus store. Not only did our team bond together over opening a new store from the ground up, but we struggled thru a grand opening just four days after 9/11. They were a special group, and I'm still close with many of them today.

Our move to Dallas brought several new tribes. I have family from both sides of my parents here, so we are blessed with another familial tribe. 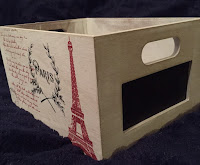 One of the strongest, closest tribal units I have are my core group of friends at work. These are women who have worked together for many, many years. I'm so blessed to be a part of this group. They are sisters of my heart. The inspiration for this blog post actually came from my friend Stacey. She stopped by my office to give me an awesome crate that she had picked up knowing I collect all things French, and it reminded her of me.


My writing journey has brought me more close friendships, some of the best ever. As part of the Dallas Area Romance Authors chapter, I've become part of smaller tribes of the big group. From being on the board, to becoming a Plotting Princess, to my critique group, to my 2 best friends Sasha and Suzanne, they are all sisters of my heart.

As a whole, the romance writing tribe is the biggest and most supportive group of authors. We celebrate successes, drink wine and commiserate over trials, and plot and brainstorm when help is needed. This is one tribe I never want to leave. 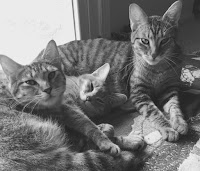 Last but not least is my core tribe: my husband and four cats.

What about you?  How many tribes are you a part of? How have they shifted over the years?
Posted by Allison at 5:28 AM

What a cool notion, Sloane. I've never thought of myself as having a tribe, but when I stopped to think about it, there they all were. :)
And I honestly think that Romancelandia is one huge tribe, that I am so happy to be a part of. :)
What a nice feeling!

I so get tribes. I have one I call Funsisters. We go on trips, celebrate, you name it and they have my back.

The PP girls are pretty awesome, too. Hugs!

Elizabeth, I hadn't thought of my groups of friends that way either, but it is true, isn't it? Thanks for stopping by to comment!

Vicki, I love the name Funsisters! I definitely have some of those. I agree about the PP girls! I'm so happy to be a part of this tribe.

I hadn't really thought about my friends and family as being part of a tribe, but that actually fits. I've made so many different tribes throughout my lifetime, but I especially treasure those I've made since I began my writing journey. It's so lovely to be able to interact with others who are like-minded. Thanks for sharing this different spin on the connections we make.

Hmmm I also never thought of my groups of friends/family as tribes. I have a very small circle of friends and family...but I have my on-line tribe of people that lift me up and celebrate my successes and have really uplifted me in my recent health crises!