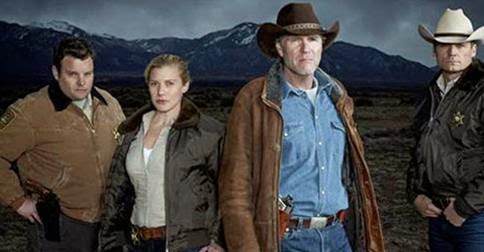 Netflix rode to the rescue and the show continues.

Handsome and I have been doling out episodes instead of binge watching. We want to make this last.

Are you a Longmire fan? Have you been a fan of a show and it was cancelled with you wanting more?

And if you like Longmire, consider tweeting: #LongLiveLongmire  or #LongmireSeason4

I've never watched the show but I hear many good reviews. I may have to find it on Netflix.
Thanks for sharing,

I haven't watched the show but I know it was wildly popular. Sometimes I don't understand how TV studios can close down great shows but keep open reality TV. Just how many times can we see a dog and pony show on so you think you have talent!

My husband's cousin is a writer for television. She's written episodes for Maude, Golden Girls and many other shows. She says that for the network to pay stars, cast and crew, plus numerous writers can easily go over a million per episode. A reality show can offer a million dollars after sixteen weeks and still come in under budget. That's why our shows are being held hostage by inane entertainment. The dumbing down of our population continues. mariaruizauthor.com

Longmire is my husband's favorite and I have to admit I enjoy it too. We're already watched Season 4 - the way it ended there has to be a season 5! Enjoy.

Hubby has enjoyed Longmire since the beginning, I've watched when I can. I am glad they brought it back to at least clear up the cliff hanger regarding Branch.

Hi, Carolyn: All seasons are available on Netflix. I highly recommend. It just isn't like the cops and robbers shows out there. Thanks for stopping.

Hi, Melissa! When A&E dropped Longmire and then announced a new show--Prison Love???? Seriously???? That's trash TV. I do understand A&E did not produce the show; so they bought the series in other words. And that cost money.

Hi, Maria! I'm so glad you shared the information. And yet, network television is on the decline and more shows are being downloaded from Netflix, HBO, etc. I'm thinking we will see a huge change in television watching before long. Hugs!

Hi, Judy! I am on episode 5 of Season 4--have to wait for Handsome. He won't let me binge watch. LOL

Hi, Phyllis! I kept waiting for the evil Branch twin to show up. So overdone, but couldn't believe he was gone. Sigh.

I only follow a few TV shows, but Longmire is one. It seems like all the shows I really like get cancelled. I guess I don't fit in to that preferred demographic.
I'm awed by the season four finally. They have to continue.

Hi, Sandra! In season 4 we can see the Netflix influence. Obviously, there's more money. I see bigger sets and more extras. Try that #LongmireSeason5 hashtag. Thanks for stopping.

I have never seen the show. Nice to hear viewers made a difference.

Hi, Angelina! Well, let me catch you up with this post. LOL. The Longmire Posse went a long way in getting the attention of Netflix. They were constantly on Twitter and FB. And still are, now campaigning for Season 5. I really admire what they accomplished.

The public does make a difference. Once, many years ago in San Diego there was only one station with a children's show in the morning. I would allow my son to watch Captain Kangaroo after he was dressed and ate his breakfast. He loved the show so much that he would hurry to be rewarded. The station then decided that it would cancel the Captain and put on another early morning show like Today. Kids had no reason to hurry.

I organized a group of mothers to write, threatening to boycott any advertisers of the adult show. Mothers talked to other mothers and soon (two weeks) later the Captain was back with us.

Maria, that is awesome. And I remember that show--Mr. Green Jeans. Isn't that a great name? You were a power to reckon with by having those organizing skills. Was your group large? Must have been to a degree because they listened. Well done you!

Thank you Vicki. Actually our group was very small, maybe ten mothers but each of them had friends. This was years before social media but I think our local TV station had never had their decisions questioned and were afraid it would grow. It wasn't too long after the hippy movement had closed U.C. Berkeley and they could just visualize a bunch of angry mothers marching on them.

After reading friends' posts about Longmire, I finally decided to re-join Netflix. Hubs & I have watched one episode so far. I really like it but then my daughter posted on Facebook about Grace and Frankie (starring Jane Fonda and Lily Tomlin)! Totally hooked! After I finish binging on G&F I'll get back to Longmire!! :-)

Hi, Gillian! Someone mentioned G&F recently and they are enjoying it. I am such a huge Survivor fan, that I record it and catch up. Okay, Naked and Afraid, too. AArgh! Too much fun! Thanks my friend.

B-I-G Longmire fans at our house. So glad Netflix picked it up, but dying from suspense to see if they'll release season 4 on dvds. (We don't stream Netflix, just do it the old fashioned way.)